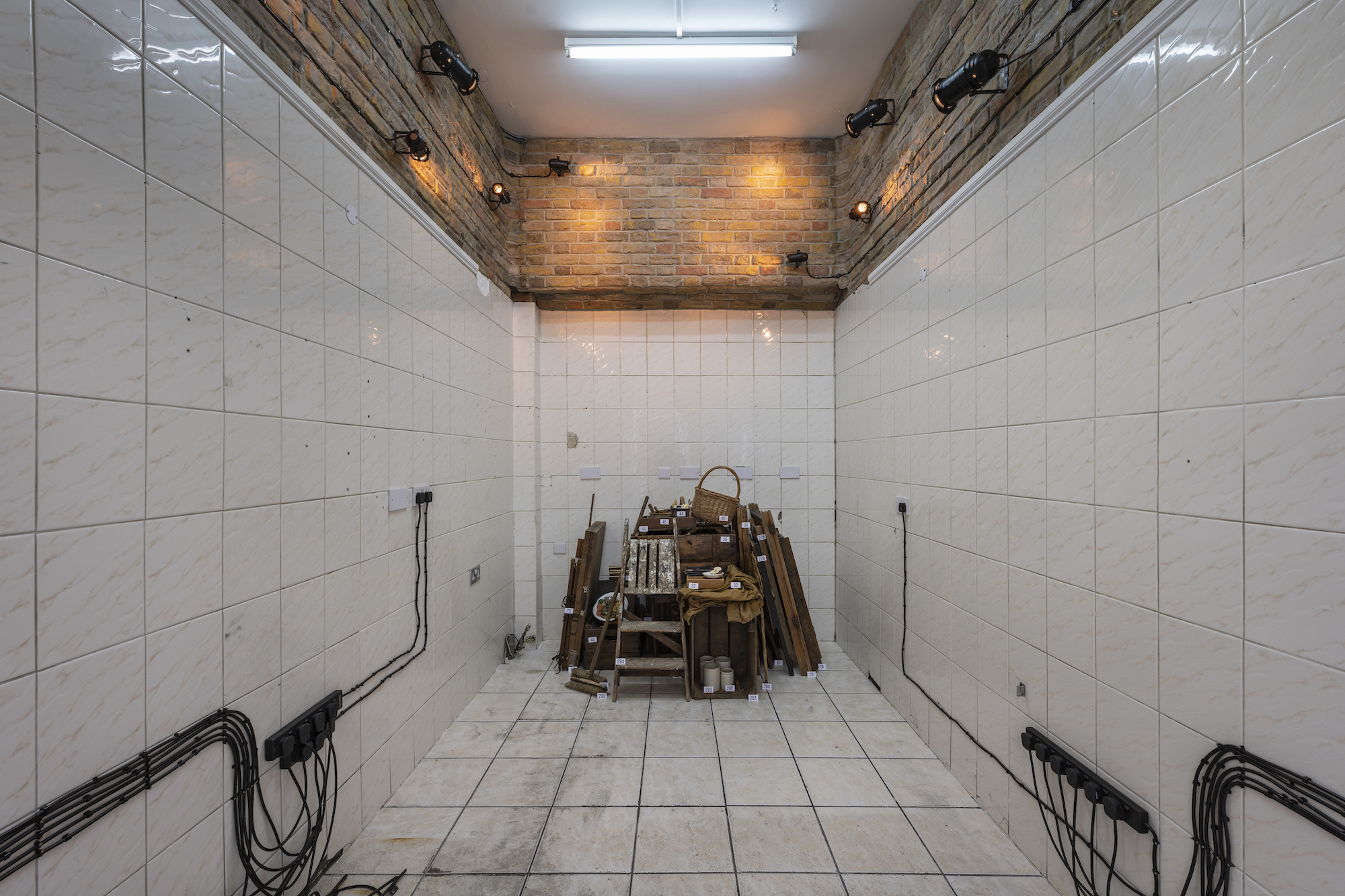 In 2010 an outfitters in the City of London ran a not-closing-down-sale in response to the Crossrail development in the area, covering their windows with promotional posters. Here, the viewer will encounter facsimiles of the original posters remade in soft pastel, their dusty unfixed surfaces bearing the marks of their making, an over engineered and overlaboured reproduction of what was originally a collection of digital prints. The shop subsequently closed down before the opening of Crossrail.

Moving through the space, panels of artificial brickwork repurposed from a theatre fold around the walls, forming a self-illuminating frieze. Affixed to the paintwork are theatrical lanterns which are wired to salvaged sign brackets from an authentic museum street scene display. The lighting features illuminate only the brickwork, possessing the scene above with a warm glow.

Meanwhile, boxes, crates, and folding furniture have been amassed into a pile at the back wall. The collected material provides evidence of past artistic and theatrical production: a handmade toy theatre, a folded backcloth with rigging, a tin of soft pastels, and some broken down coveralls bearing the marks of creative labour, inflicted to ensure the appearance of having been worn even when unworn.

Dust is collecting upon food made for a post-war museum display, served on decommissioned NHS plates. Items within the mass are labelled with number cards, in a manner reminiscent of archeological discoveries documented in their original context before they are extracted and studied. The numbering system could also pertain to a crime scene or auction. There is an untreated infestation of woodworm.

On the wall hangs a cutting from the final page of an auction catalogue, from a 1997 auction of the complete contents of a privately owned museum.

An odour is dispensed within the space. It is composed of forty-two blended synthetic chemicals and was developed to reflect unstable historical accounts from within the paranormal community. A reincarnation of the described supernatural activity has been approximated from found descriptions of real encounters, discovered through blog posts, message boards and forums.

Arden’s research into lost museums and shops is metabolised in dynamic recreations that gesture towards the tactics of immersion utilised in museum displays. The passage of time is confused by objects that are generic, imitation, or show signs of having been subjected to study, display, collection, or tampering. These new works contribute to Arden’s ongoing processing of research through reconstruction, replication and re-enactment.