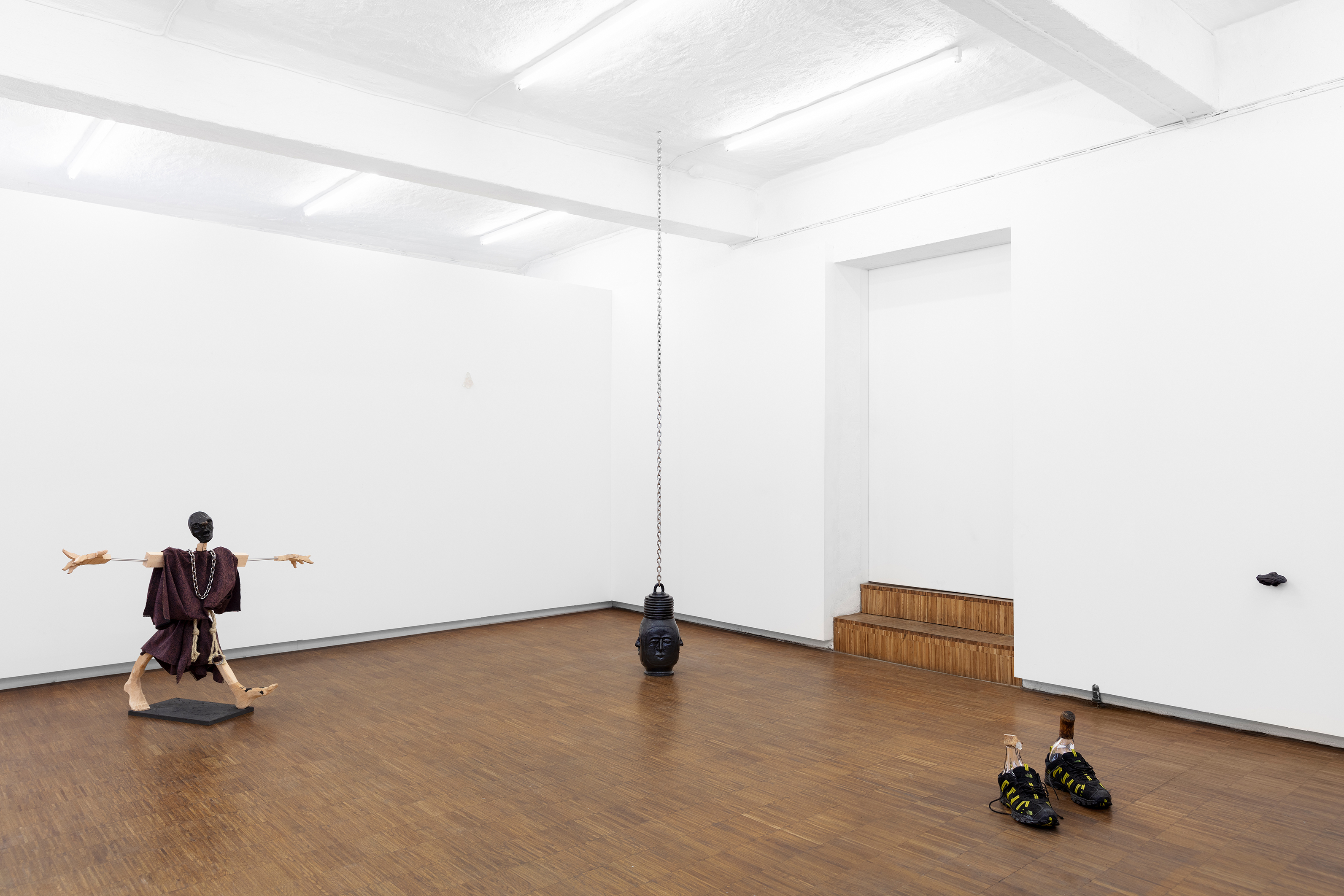 And Darkness the Right Hand of Light

co-curated by NEVVEN and MELK

The two main systems of thought supporting most of our knowledge of physical reality, Quantum Mechanics (QM) and General Relativity, have been both largely proven as valid, yet, when brought to their extremes, to the infinitesimally large or small, these two theories contradict one another wrong by fundamentally describing a universe made of different yet somehow coexisting natures.(1) The fact that the world in which we live is not possible to be congruously described (by science, at least) has a poetic resonance which is impossible to ignore.

If we follow QM to the infinitesimally small particles, the reality around us becomes so incomprehensible to border abstraction and so entangled to make matter almost impossible to be divided into separate entities. This entanglement,(2) in its poetic and philosophical implications is crucial in the work of Norwegian-based Italian artist Alina Vergnano. Exploring the thin line between figuration and abstraction, capturing the in-between-ness of different states, emotions and techniques, her canvases are grounded in an abstraction-of-figuration where bodies, limbs, eyes intertwine on their sometimes minimal sometimes maximalist surfaces. Over-imposed as if capturing the instant within the complex reality of the microscopical, her works uniquely embody fluidity, in its fleeting and impalpable nature, as if they were physics of the emotions reified.

Phenomenology and especially one of its natural extensions: OOO (Object Oriented Ontology) invites to read reality not as stream of causal effects but instead to focus on the perspective of any object, which once freed from its causal relations lives in a stream of unrelated and unique states. It makes us appreciate a new perspective and an almost religious attention to the uniqueness of anything, alive and not, around us. The sacrality derived to all that surrounds us, to each single stone and manufactured item, to each animal and living plant is not only the most obvious result of this advanced philosophical interpretation of physics, but the same thought at the base of the spirituality and religious beliefs for the Sámi (in the North of Europe, for as much as similar ideas can be found among many other cultures from all over the World). It is drawing from both OOO and this ancient knowledge which could have been passed to him by his elders (if the passage would not have been broken by colonialism) that Swedish artist Olof Marsja produces his sculptures. These are objects with a story, a private idiosyncratic story first, but also a story mediated by a never neutral use of materials and crafts as much as the ability to infuse these hybrid spiritual, philosophical, personal artefacts of great humour, subtle pop references and Gorp fashion.

Fecund, inspiring and, at once, similar to the entangled reality of subatomic matter, hybridity is a territory where also Stockholm based Norwegian artist Tim Høibjerg’s practice deeply dwells. Challenging reality as much as our perception of it, Tim Høibjerg brings us into a realm which is frightening and fascinating, horrifying and sensual, dark and bright at the same time. His practice blends and attempts to blur classical dichotomies such as good and evil, or real and digital, presenting us instead with a fluidly erotic world where the male body is often hybridised with amphibious and marine creatures, in installations, videos and sculptures whose queerness reminds of the behaviour of sub-atomic matter.(3) A realm bordering the abstract and transporting us deep into what could be a dark nightmare, or one’s most intimate fantasy.

It is in this darkness and brightness, in their queer interconnectedness and incompatible yet inseparable nature, which reminds to how physics and ontologies have the capacity to both describe our reality and finally not agree with each other, that And Darkness the Right Hand of Light wants to invite the viewer to dwell, and venture into the practices of these three artists. Different yet relating, non-causal and omni-comprehensive the works by Alina Vergnano, Olof Marsja and Tim Høibjerg complete and inspire new interpretations of one another, reminding of how all is interconnected and contradictory, at once and at all times. As an hermaphrodite alien in a far planet and future said: “Light is The Left Hand of Darkness / And Darkness the Right Hand of Light.”(4)

All pictures courtesy of the artists, NEVVEN and MELK.
Photography by Christian Tunge.