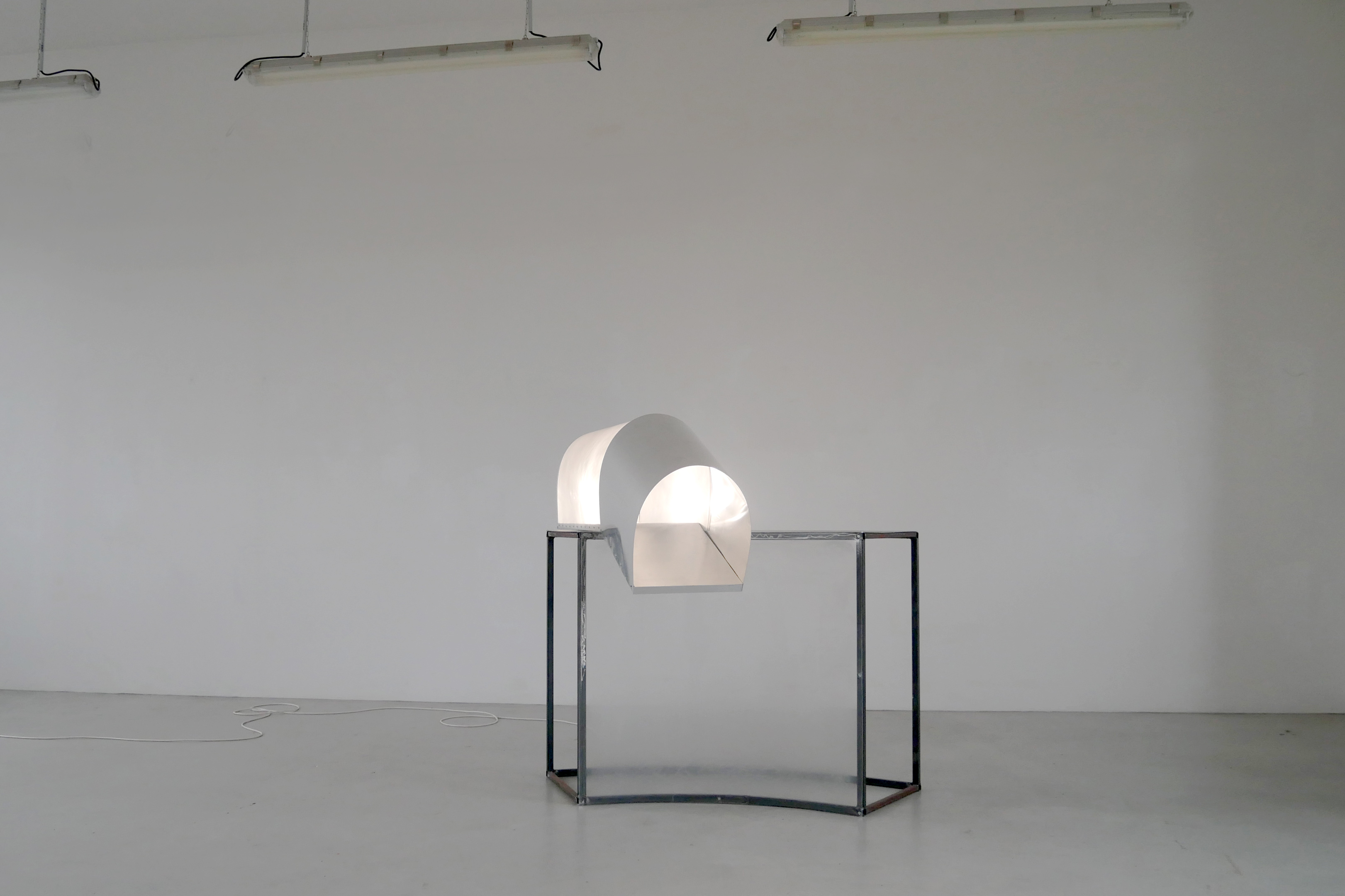 Can you tell us about your background? It seems to me that your work was initially focused on the image?

I studied at Beaux-Arts in Clermont Ferrand, at the beginning my practice was focused on the image but I never told myself that I was doing photography or video, I evacuated this question. I was more interested in the format, the fact that it is an image. The subject did not interest me and even became the problem. The surface fascinated me a lot at first, both as a legacy of painting and as an opening to the world. I considered it more specifically as a projection space.

Is the question of representation both of its possibility and its disappearance an important element in your approach?

Until I graduated I struggled a lot with representation. It was after a trip to Arizona in the Hopi Reserve that I realised that I had to stop working with images, at least those that represent, those that are imposed. What struck me was that I felt the need, as a Westerner, to capture, to take in order to keep for oneself. When I came back home I couldn’t make any more images. The question of being present in a space and time became more and more important. At the Fine Arts school I was obsessed with disappearance but today I’m doing the opposite.

It’s interesting to make works that are not “material” objects, especially when you work with light as a medium.

During my art studies and even afterwards I refused to make objects. To make an object exist is something. I wasn’t capable of creating forms that would clutter up the world. Working with light also comes from there – to show things that don’t have a strong materiality.

In your formal vocabulary you tend to go through sculpture in a certain way and more precisely through that of light. This raises questions about the conditions of the visible and the emergence of a form. Can you tell us more about this work around light?

I started working with natural light in 2014 and at that time I didn’t want to introduce an artificial aspect. For a long time I refused to create an illusion. I wanted to work with what was already there, natural light and architecture. Today I work a lot with artificial light through installations and sculpture. What interests me with light is to give it a shape and to bring a strange presence in space, something uncanny. Encouraging the viewer to look beyond the exhibition space, to be more attentive.


It is almost possible to speak of a a typology of sculptural forms passing through light.

In recent years I have developed a sculptural work with the same obsession regarding what escapes us and the desire to not stop at a form. It would rather make us feel that it could evolve, wake up and become something else while being the same, always in this ambiguity. It is finally the idea that there is a potentiality of other forms contained in everything.

There’s a fictional aspect produced by the light that translates our perception but also a certain corporeality, is it something you’ve already thought about?

I think so, in a way I fictionalise a space through my luminous proposals, but I would say that this is not what I am looking for in the first place. Light is a magical tool that transfigures space and I am more and more sensitive to it. When I arrive somewhere, it is the first thing that attracts my attention and conditions my relationship to space. It is everywhere in our daily lives in different forms and I think people are paying more and more attention to it. My fascination for light is above all linked to the body and how it impacts our emotions, our state of mind. I see light as a sensual presence in which we are constantly bathed, for example when the sun caresses my skin, there is a kind of embrace.

You take into consideration the viewers in a particular way through your work, they are led to reflect on their position. How do you address the viewer?

This is an essential question: How can the viewers be brought to their own condition as a spectator in space? I try to create a slight shift in the viewer’s perception of the space, to slightly change their point of view.

How would you explain your approach in relation to space? In a way, forms seem to fade away depending on the situation.

I try to work as much as possible with the context and the place in order to present works that interact with each other and fill in gaps and hollows. When I enter a space, I need to identify the forms that could somehow relieve the space, bring what it lacks. It is important that my work is not necessarily visible at first sight, that it does not impose itself in the space, but rather is an element of the architecture and thus disappears and appears with it.

Peripheries are important in your work, do you project them as a withdrawal ?

I think that contrary to a disappearance, taking an interest in neglected “peripheral” spaces is a way of being present and of putting up resistance. We tend to consume what is placed before our eyes. Asking the viewers to be more attentive is also a way of making them more active.

Some of the works appear as “discreet” interventions that initiate an almost intimate complicity with the viewer.

Yes, I think that this intimacy is established because not everyone will necessarily see my work. There is always a certain satisfaction in finding or seeing something for oneself. It’s the combination between the chance of the encounter and the attention one has for the world. But I try more and more to think of autonomous pieces that don’t need a spectator to exist. For example, for the series of night lights, the challenge was to find a balance between the production and the circulation of the work.

How do you approach the context of the exhibition through your work?

It’s very important to take a certain distance from the question of the exhibition because I have the feeling that we’ve came to a point where we show everything without considering the interest. The format of the exhibition is an authoritative shell, but nowadays it’s not really clear why we continue to make shapes in a white cube. The conditions for the visibility of art have to be questioned.

Previously you were talking about forms that become different while remaining the same. This is also reflected in works that are part of ensembles in the form of almost a repetition without, however, establishing a single form. Can you tell us more about this, especially through the night-lights serie?

Yes, I often have the impression that a single form is not enough to embody the whole of a project, which explains the importance of repetition and the production process. I started the night-lights serie in 2017. It was based on research into the autonomy of the work and above all that of the artists – how to find a position as an artist that does not put us in a situation of waiting for the desire of others.

I had the feeling that this small luminous object was already saying a lot and that it could take on different forms. I started to invite friends to make some with me. The idea was to gather around a project, to propose an autonomous and off-centre space. The night-lights are all different and they are all part of this project which remains open. It’s a way of materialising a presence,  my friends’. I would like to continue this invitation with these objects.

You have also produced night-lights and bulbs that are initially linked to your body moulded in by your hand, they have a more corporeal appearance. Can you tell us about the process of designing these works?

Yes, I wanted to be in an immediate gesture of sculpture. These forms – which somehow slide towards the ground — both illuminates and looks at something. They are the direct result of the pressure of my body and my hands on the material, it’s a sensual gesture. Working sculpture in this way, between gesture, material and form, is perhaps also a way of transferring my energy into these objects.

In your work you seem to have a distanced relationship with narration, in favour of gestures and more minimal forms, can you tell us about this relationship?

I don’t work much from a precise story but from dreams or things I want to see appear. I try more to reveal presences. What interests me is to be in the sensation. The narration I propose is rather a vision that I have of space and I invite the viewer to follow this path.

We talked a lot about appearances for a part of your works, which If appearances are less material, it also happens within the context of the exhibition. Is there a closer term?

I often talk about appearance, it’s an ambiguous term that refers to the supernatural, to the action of making oneself visible and to a moment of visibility. To appear is to be present somewhere for someone. This is what I seek to do in my work, to reveal presences and create situations of apparitions. So I think the word is rather appropriate at least for the moment.

You also took part in the “Art in Chapels” (L’Art dans les Chapelles) residency where you produced works with other people, can you tell us more about that?

It was a participative and collaborative residency, we were 3 artists invited by Guillaume Clerc for the project L’Art dans les chapelles to work with the medical-social centre of Pontivy (France). We produced a set of sculptures and modules on which the public could interact. I worked on a large light sculpture with the participants. We produced this large lamp on the scale of an adult body. It is made to be hugged and carried and to clutter up the body. It looks like an air duct. This residency taught me a lot, it was one of the most beautiful moments of my career. The idea that my work can be a relay or a vehicule more than a static object, that it can be embraced or held and that bodies can rub against them is one of the most important things.

There is finally a significance of energy as a flow in your work.

How you move around as an artist in your own practice also means letting yourself be surprised by the forms so that you don’t get stuck in your own ideas of what art is. I don’t produce much and what I do show, I hope, are things that are quite embodied. I am talking about the energy that can be transferred into an object by contact. I have the impression that objects give off more or less strong energies and I try to make my work the passage of this energy.

Image header : Project Cultures & Solidarités carried by L’art dans les chapelles and Centre Médico-Social of Pontivy, with Amine Benattabou and Francis Benincà, with the support of the Department of Morbihan.