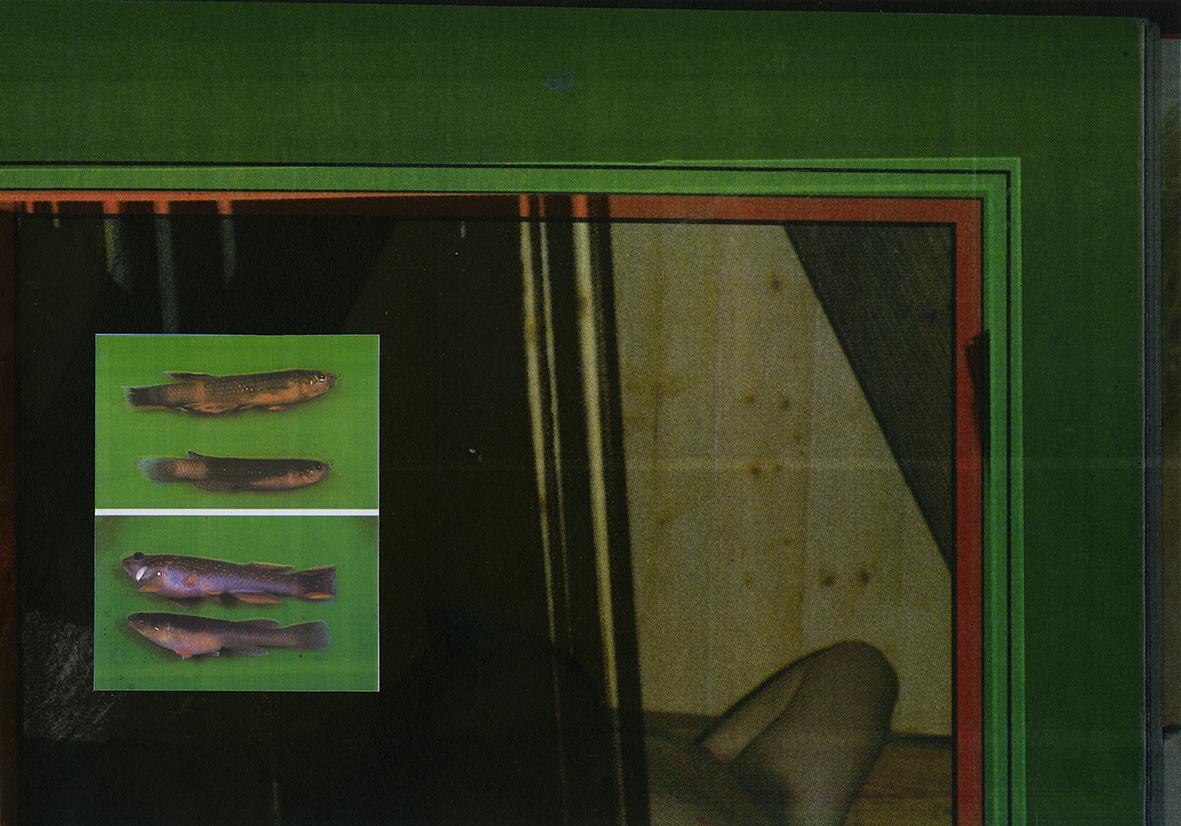 A TITLE AND IT’S RIGHTFULL MYSTIFICATION First of all there are free pictures , photographic icons in FREESTyle , free of copyrights , then there is what they represent or can represent , according to my desire or according my good pleasure , a slap of thighs.

Thereby , in this exhibition , there are the images all around us and within us , and then only comes the contamination with it’s untimely human factor : the sweat due to the action of the artist . As the slim difference in between a clean and a used shirt , sweat has passed by. An infra-slight (in-fra-mince) difference , but quite a big one for those who know.

The exhibit is like a full moon at the Foire du Trone. Nocturnal visions in a park . A park composed of different activities : there is the ferris wheel , “the wall” ; a gathering of A4 photographic portraits displayed on a large wall. There is the bearded woman in the back room , Collages ; work that put forward bodies in exhibitive positions. Further , there is a video-film inviting us to remember ; we are peeping-toms in a flux of memories : cinema has also started as a fair attraction. The video will be shown on a monitor in front of two comfortable seats. Then there dispersed catalogs , aiming to make us understand , to make us wait for what will never come : systematic treatment of the image flow.

BAD DRAWING ET BAD SHOOTING ARE ON A BOAT…

HH : «— No more post treatment of the images , they are worth what they are : low-tech pictures taken in 2011/2012 with a primitive Nokia » There could be a meridional line drawn through the history of artists using their own lives as photographic material : DUCHAMP-KLEIN-FICHLI&WEISS-GUIBERT-MESTE-SOBAC-HEGRAY

Let us take a closer look at these pictures taken with an old nokia, let us enter the space. What are these pictures that Hendrik Hegray has displayed? You can perceive some characters that we ima-gine being part of the intimacy of the artist and living spaces showing the collusion of artistic work and intimate life. It is engraving the intimate into the context. Life deprived of private life.

HH:—«The pictures taken during that period do not correspond to any causality or premeditation. They are simply pictures I have the habit to take around the environement of the moment with the tools I have in hand. Retrospectively , these pictures constitute for me a corpus of great value , at the same time for being a document of a segment of my life and for their strange plasticity »

Double rupture : visual rupture , the medium only being photographic ; temporal , directly brings back times that have gone , fixed in the past. My motivation to show these images comes from a wish to once again manipulate elements of my past. Associated with collages and other recent works , the whole accentuates the desire to provoke temporal ways and backs.

HH is not the first and certainly not the last , but we can notice the singularity of this praxis , display of éléments already used , already shown. And in this principal of alternance , of recycling , the used chemistry stabilises ,emulsifies in our minds in present time.

«MY LIFE IS MY WORK» : THE AESTHTICS OF BANALITY

Hegray takes the idea of the nineties , we can remember Georges Toni-Stoll or Nan Goldin, or even Mark Morrisroe and Philip-Lorca diCorcia , for the way that they all had as first anti-aesthetic state-ment banality and documentation of daily life , to be able to photograph something new (the finalities are of course different)

THE UMBRELLA AND THE SEWING MACHINE: CHAOS AND DAILY LIFE

In Hegray’s work , we particuarly notice in his use of photography a porpensity to bring reality in it daily movement into a prespective of great abstraction. What some might not see , is that it mea-sures with real cosmic dimensions. We could name it the «Chaotidien». This neologism has been rooted in his work for ages ,in the making and in the showing.

PRAXIS VERSUS BIOGRAPHY : PROUST AGAINST SAINTE-BEUVE

There are a few different gestures referring to the production that we are shown: photographic assembly: There are at first images who will constitute the raw matter of what will be brought to our knowledge , then the way they will be shown either the wall ,collage or film. We can believe that the order of presentation could be random , HH could very well present the images in a different way , since each order takes it’s meaning ,more in the way that they are assembled from their assembly than their intrinsic meaning. Even if you might recognize some of the road compagnons on these portraits , all of the sudden personal aspects of the artist’s life , his biography takes a deleterious importanceProust against Sainte-Beuve. We can justify the gesture of the artiste by this one biographic inscrip-tion , in this material , beauty prevails when personal images blend in the whole.

BEAUTY AS A DISTANCIATION INJONCTION

Out of the provocation of this title , cornered in trying to esthetically conceive the images of the exhi-bition. We are compelled to escape from the traditional principal of beauty. With evidence , in these images in front of us , hit the so called good taste.

MOVE ALONG NOTHING TO SEE

These images coming from the wall , from the collages or from the video have nothing to sell, would say a professional publicist.There is a propensity in Hegray’s work to restock classical icons in lost and far out areas , out of reach of the common being.He transforms , transmutes the act of low tech photography into a superior act. It is almost the attitude of a dandy that we could guess in a hu-moristic mouvement to point out banality , but more as we feel the determination to produce totally irrecoverable images , cautioning an accordance to the adage of the principal of delicacy (principe de délicatesse).SHOULD WE BURN HENDRIK HEGRAY?

His conceptions in the idea of good taste can be surprising , as much as he loves to rave towards strange borders that constitute our own point blank. He vows a inveterate love for the uncanny and for the obscenity of his images that have their integrated planned obsolescence , you could believe it fortuitous and superficial , but the research of obscenity actually reveals a pur ascetical reflexion on our spectacular world ,confronted paradoxally to his instinctive praxis: to select.

It is in that very appearant logic that he distrusts all schemes of narration that could make sense all of the sudden , that could deliver a message , he leaves that to the fascination of theme parks , Luna Park that he absolutely does not denigrate ,quite on the opposite. Under the apparent souk of glorification of an authentic disgusting under-culture – as of „claquement de cuisses“ which confirms the propos- the scandalous mind of Hendrik Hegray hides and watches over treasures of blinding brightness.

Amidst the collages , doubled non frontally , we find signs of presence/absence of body lust. As so the leather cap in «Entrée dans l’artiste», and the fan disposition of BDSM magazines in «Gonzo Panini».They are playing with us , everything is good when excessive , said some old man: we are shown the unshown , without them even really showing it! The practise of Waxplay in «Purple Wax», or even a leather mask in «Bonny Tylerfish» that we only guess because of the almost over the shoulder angle of the shot . So the non initiated to leather mask practise or wearing or to face-sitting or even tea-bagging , can easily pass by without seeing what was supposed to be seen, and focus their eyes on other details , more obscene ones more obvious ones : an erectile sardine nagging some blonde hair and then imagine the invading fragrance.

It is the path of the violence of the images and their replicas , game, as classical as obsolete. Either the images we perceive in this space give us a numbing sensation , answering to excessively against the sollicitated irritation ,or they arouse us and the correspondance gets established either way.

We understood that Hendrik Hegray uses all means. What matters to him is the gesture , the one he chooses moves and selects. Art finds itself in it’s strictest function , the most restraint.The origin , the referring , the consequence , in short all that make Culture , is not even rejected , just unfused ,devi-talized , given away as trash , the ruin of images in front of or eyes. At last , we start to ask ourselves :

He still has the tenacious posture and energy , revolting and revolted of a young man. To meet him brings up contradictory feelings , but never leaves you indifferent. Behind his phlegm ,and his corro-sive bragging humor. HH shows proof of disconcerting frankness.

BRUTAL ESCAPE FROM THE ASYLUM OF CATEGORIES

Hendrik Hegray draws , travels , plays piano standing up , records under multiple pseudonyms the characteristic sound of a scotch tape roll unraveling , makes collages from lost pictures , flyers from scratch and comical record covers. He crosses out , paints over , blurs and exposes , takes care of a noise music record label , experimental or technoide abrasive rock , and co-founds with Jonas De-laborde NAZI KNIFE and FALSE FLAG ,two graphzines gathering an international collective – USA ,Italy , UK, Finland , Japan , Jamaica , France… – that starts to confirm it’s historical importance in em-bodying the consequences of a degenerate art , in short it is impossible to classify Hendrik Hegray in any sort of isolated category. He has carefully for over 15 years avoided to have been tagged for any of his activities. Let us keep in memory his style and the mouvement of this avoidance because they are the founding elements that make the politics of his production unrecoverable , as much on the aesthetical and theoretical side than in media.