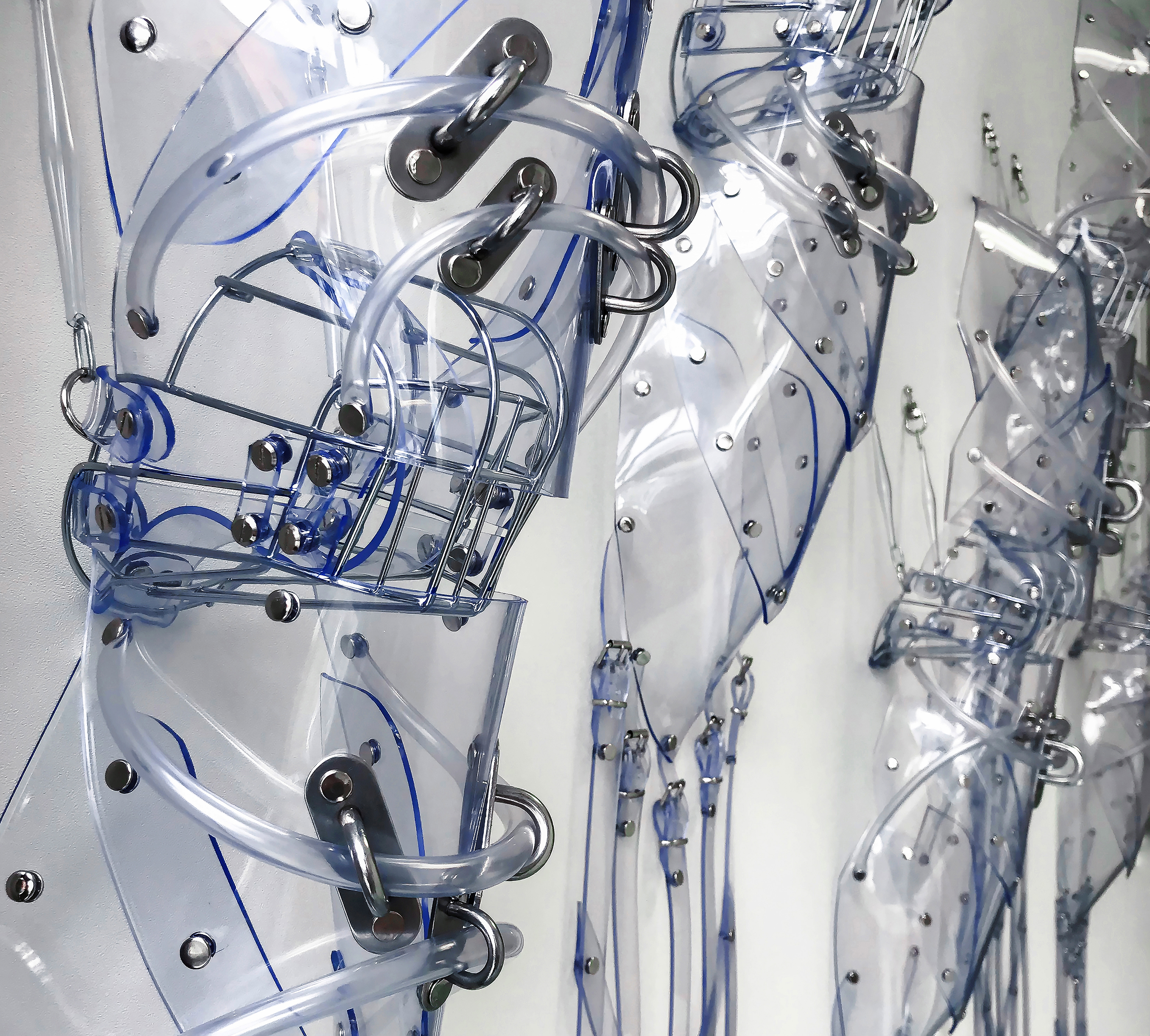 For two months, Floryan Varennes spent time at the Centre Hospitalier Métropole Savoie. Placed in the intensive care unit, the artist-in-residence was confronted to this transitory place, under pressure, where life only hangs by a thread. His stay at the institute is circumstantial – medical tools make up a big part of his plastic vocabulary: used insulin syringes, braces, and cervical collars are examples of objects he has been using since his beginnings. The plastic artist exerts the same moves as the surgeon; he cuts, alters, and recuts materials in order to give them a new shape, a new body. This stay, during which he was able to meet hospital staff, enabled him to delve in his research and to create brand new pieces. A sculpture and a series of bas-reliefs give birth to the exhibit “Hard-Care”: hard-core (brutal) or hard “corps” (“corps” meaning body in French) developed into “Hard Care”. This title conjugates the intensity of care and treatment, and the difficulty faced by the patients. It foreshadows a work that deploys itself as an oxymoron – where the tension between the diverging shapes and materials is permanent.

The intensive care unit, in front of which stand the pieces, welcomes patients that have one or several organ failures. The critical state of these patients forces the doctors to keep them under high surveillance, day and night, during which their survival is an incessant, laborious and violent struggle. The question of survival is a cornerstone in the artist’s work. The survival of the body on a physical level of course – but he also conveys other forms of survival: legacy, heritage, and memory. For Floryan Varennes, who adopts a medievalist position, the reminiscence of the Middle-age constitute a bottomless source of inspiration; he is interested in the cultural, social and political illustrations that result from that era. He appropriates for himself certain visual attributes that come from the world of chivalry, which he then transposes into the hospital world. In his work, the struggle of the knight is analogous to the struggle of the patient. The sculptures borrow the shapes of medieval armours, in particular spaulders from the 15th century, which are reimagined using modern materials.

The violence – which could’ve been perceived from this coercive piece of equipment, finds itself countered, and even exalted by flexible PVC tape, which is usually used to separate different areas within the hospital. This transparent protection makes the body – which is already so monitored and assisted – even more visible. Instead of concealing it, the series “La Meute” (The Pack) conjures up anonymous and missing bodies. From chest to cuff, fragmented pieces, maintained by rivets, constitute a second skin; a sophisticated set of jewellery onto which the artist adds different ornaments, earrings, and armour straps. The strips – the visual signature of the artist – hang down, and end on triangular rings. All of these figures of iconographic frameworks hail from medieval manuscripts, such as the Codex Manesse and the Morgan Bible – both references in the discipline. The protruding and enveloping shape of the pieces evokes a protective cocoon – while the anthropomorphic character of these entities bestows upon them the allure of guarding sculptures. Mutant faces appear from these different components: structures made of stainless steel, perfusion tubes that look like electric cables. These state-of-the-art connexions give them an artificial aspect. The pieces convey the image of a cyborg mutating: ghost-like bodies, floating from organic anatomy to metal units. Arms and legs apart, these chrysalides are stretched by ropes, whose precarious balance conveys a suspended, parallel temporality, in which references to a fantasized era are intertwined.