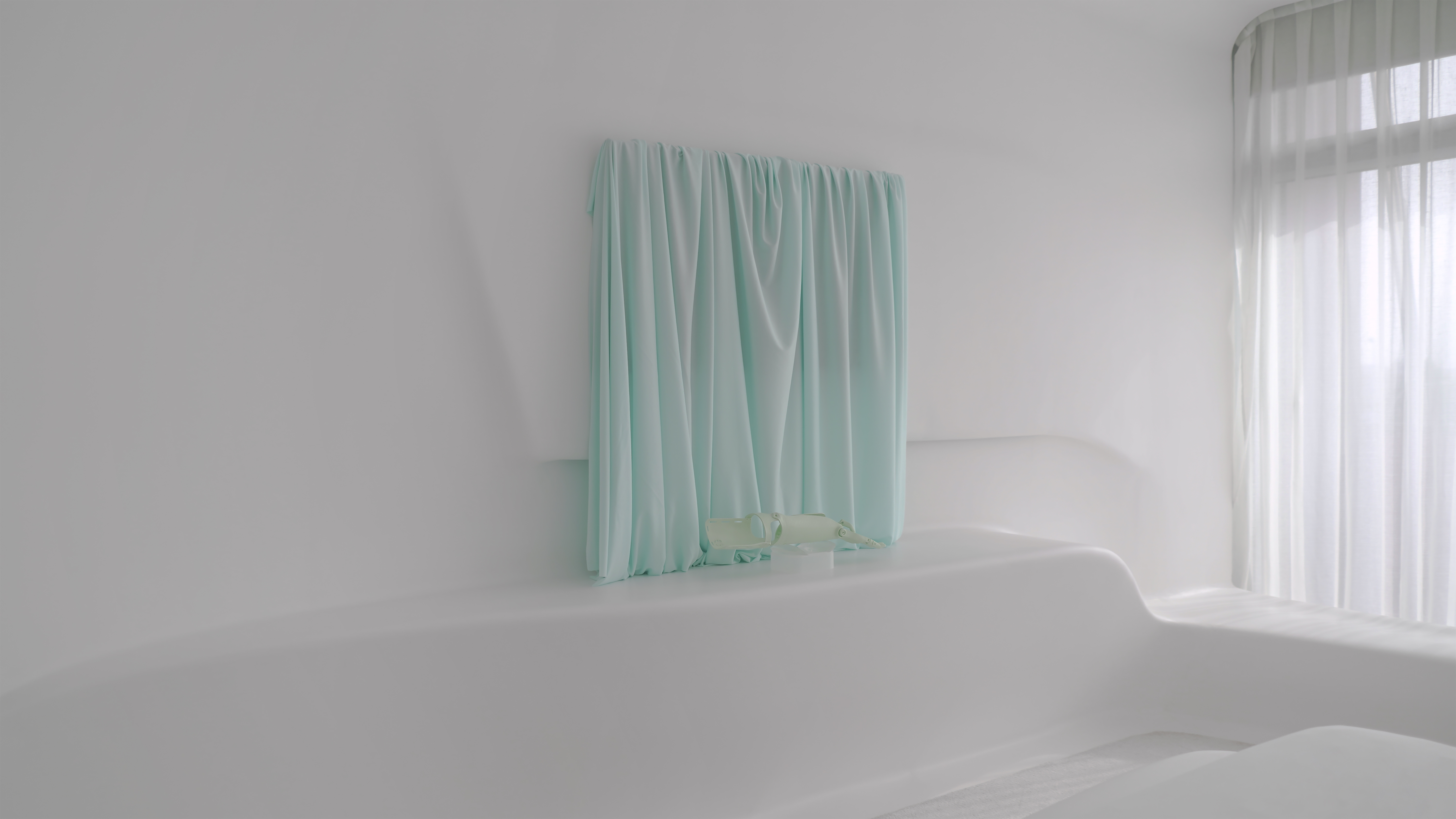 Although connection is primarily identified with connectivity in modern western society, through an increasing amount of digitalization in almost every aspect of our lives, the concept of connection can of course be met in many diverse dimensions and contexts beyond the solely technology-based realm. Borrás’ new work complex encompasses the ADAPTASI CYCLE, which is a divination of our reality, transcending the limits of pasts and futures, the organic and synthetic, the natural and technological. His work seeks to explore the metaphysical depths of adaptation as a method of surpassing the categorial limits of existence. The various elements of the exhibition operate as an essayistic portrait that embodies an augmented state of awareness of these aspects, and an elevated sense of connectivity.

Borrás’ previous works raise questions of how technology, and specifically lifestyle products can serve as performance- enhancers geared towards accelerating cerebral evolution. At the same time, technology can also become a diversion – it can provide the prospect of escape from the dismal reality of the inescapable decomposition inherent in nature. His new center of focus is based on the interconnectivity between nature and technology and the philosophical concept of adaptation. Borrás’ recent works address questions of transience and empathy within a technology-driven culture, adapting the principle that technology is both the translator and final application of science or, more generally, of knowledge. This conviction also becomes an impulse to explore various scenarios of future life because of its alignment with its meta-/physical disposition within the artist’s current approach.

Borrás creates a universe that invokes the ancient and the futuristic simultaneously. This universe is inhabited by the video work’s protagonist. With no one but a robotic dog for company, M (Ray La’Vord) lives in isolation in a soft cave, where he performs methodical and ceremonial acts. Seemingly completely at peace within its being and time, M creates captivating sense of suspense through his graceful, yet precise ritualistic exercises, as well as through his non-hierarchical approach to his world.Treating his body, surrounding objects, and space with both connected and caring respectfulness, Borrás subtly visualizes a bigger metaphysical context in this amor vacui.

The ‘soft-cave’ seems sterile, but is a depiction of the womb as a safe space of infinite harmony – a space not only protected from exterior chaos, but that even doubts the existence of any kind of chaos at all. The space, like its inhabitant, conveys a sense of other-worldly, idiosyncratic beauty, foreseen in the lifestyle tendencies of Zeitgeist, but that exists without any of the capitalistic drama and stylistic ‘tricks’ or ‘gimmicks’ of our all- and self-promoting, illusionary world.

The distinct and consequent aesthetic determination of Borrás’ work might seem intimidatingly cathartic at times, but in actuality, it stems from a vision and pure desire for serenity, clarity, and innocence within his post-human/transitory realm.

Mit Borrás is a visual artist based in both Madrid and Berlin. His multi-dimensional artistic approach primarily incorporates video- and sculpture-based works that conceptually explore how modern society has elevated digitalism, technology, and progress into its paradigm of evolution.