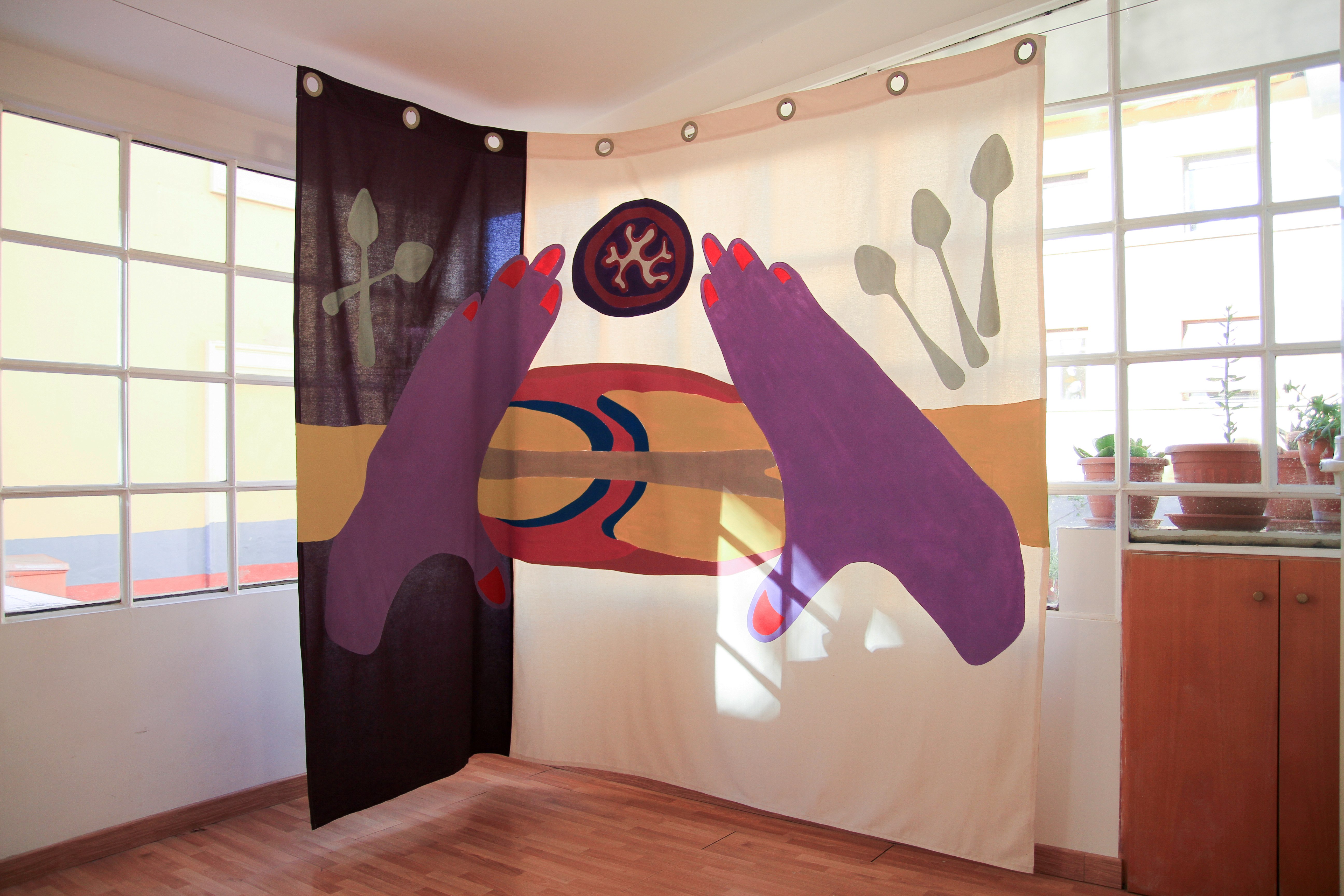 When we started thinking about the exhibition Intervallo (I) Oniromanzia with Laurie Charles, one of the first points that came up in our conversations was the relationship we can have to the narrative of the disease and its words. How to appropriate, how to make visible our anarchic bodies, how to create a new and more personal language for them, far from the barbarity of scientific language.

Laurie Charles produces paintings and films, yet it is the relationship to narrative and research that one retains when seeing her pop paintings. Her pieces presented at Terzo Fronte, between painting and domestic sculptures, are the support of narrative works around the history of the body and the disease, considered from a feminist perspective. We come across historical quotations such as the two hands that cross, symbols of Italian feminists, popular references and of course her personal history, such as the spoon theory, a vernacular system set up in conversation forums by people with chronic illnesses to measure their fatigue.

At Terzo Fronte, Laurie Charles’ works play with the identity of our space, which is both a place to live and a place to exhibit. The space modulates itself, disguises itself according to the time of day and the visitors who pass through it. With her domestic sculptures Laurie Charles covers Terzo Fronte with a new body, a carnal and sometimes visceral body, her own. The body that covers Terzo Fronte is one that we don’t always want to talk about: the body that is said to be in poor health.

But is there such a thing as a perfectly healthy body? Is good health not an idealized projection of an impossible norm of the body, produced by an authoritarian language, that of medicine? Is illness not a form of the body’s life, one of its singularities with which we must learn to live, by inventing modes of existence that give it its place?

In Migraine Laurie Charles projects us into a double life-size representation of her body, the first exposing the medieval idea of the body as a map exposing a geographical territory and the healing techniques that can be applied to it. In the second, the body is emptied of its organs, the material witnesses of the traumas experienced. This brings to mind Artaud’s body without organs, as he wrote in Pour en finir avec le jugement de dieu:

Man is sick because he is badly constructed.

We must decide to expose him to scratch this animalcule which itches mortally, God, and with God, his organs.

For bind me if you will, but there is nothing more useless than an organ.

When you have made him a body without organs, then you will have freed him from all his automatisms and given him his true freedom.

Then you will relearn to dance backwards as in the delirium of the bals musette and this backwards will be his true place.

But how to dance backwards in bodies too busy with the obscurity and formlessness of the organs that occupy them? Self-awareness, the sharing of vernacular knowledge and the subjectivisation of experience may be the answers. The exhibition Intervallo (I) Oniromanzia articulates the works of Laurie Charles with texts that support the artist’s practice and her reflection on the history of sick bodies. These texts, associated with Laurie Charles’ textile pieces, form a set of dreamed fictions, proposals of existence, which liberate the body from normative discourses, in order to give back all their grandeur to our singularities.