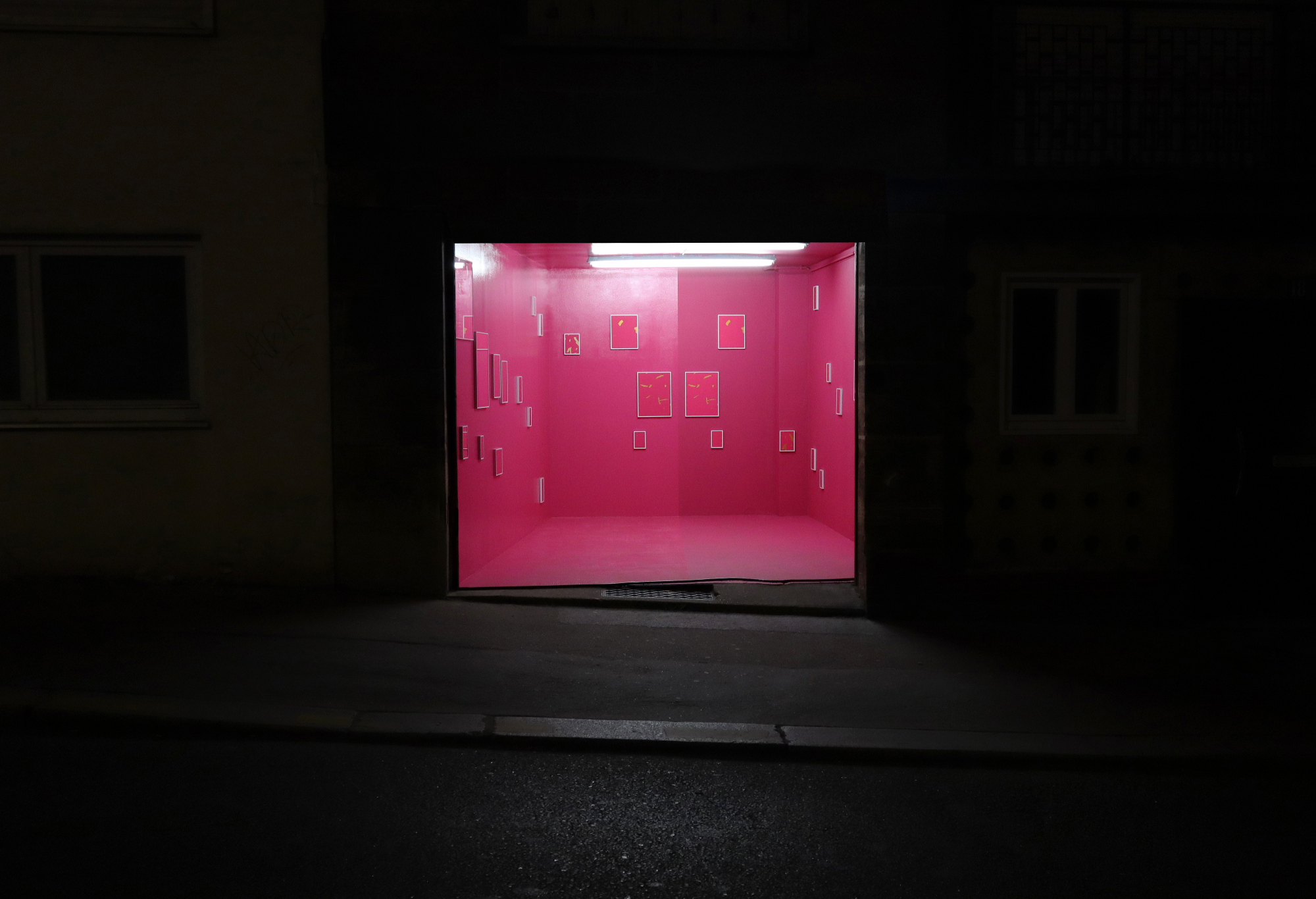 The color, deployed on the walls, floor and ceiling, exudes something spectacular. It floods, pervades the space, and forces the classic passivity of the background to overflow beyond, to such an extent that the object presented on cannot be detached from it. Physical overflow of color in the composition and in the eye. Negative persistence of the green printed on the retina following exposure (the title operates in this sense) and almost total adhesion of the screen-printed images in the fuchsia environment, if the frames did not preserve them, by the white of the contours, of an ”integral fade” effect. And from the TV screen of the clip (raw material of this work) to the screen of the serigraphs, the scattering of the motifs will have anticipated the fragmented form of the work as it appears today, constellated in the space of Medium Argent.

The disorder introduced by the frames suggests an axial symmetry, sometimes reversed. Through it, the space splits into two identical blocks, both displaying the same layout, the same serigraphs. This symmetry takes its axis from the vertical division of the gallery by its center, separating the fuchsia environment into two sections: one matte, the other shiny. A subtle difference, held in the finish of the tones, less noticeable than the pink intensity or the outpouring of glitter. It is further extended with the quality of the glasses used for the frames: anti-reflective on one side, and classic glasses on the other. This display refers to Michael Asher’s in situ installation made for Documenta V in Kassel in 1972. It consisted “to visually divide the interior of [a corridor] in half, along the centerline of its longest axis, by painting the north half black, and the south half white. This meant that the ceiling, floor, and two end walls were half black and half white. Whereas the entire north wall was painted black, and the entire south wall white.” (Michael Asher, Writings 1973-1983 On works 1969-1979, Benjamin H. D. Buchloh ed., 1983, p. 57)

Here, the exposed contrast is much more subdued than the optical break imagined by Asher. The monochromy reduces it as much as possible, close to a total equivalence between the zones. The demarcation is perceptible, but the difference lesser, because the meeting of matte and gloss, in the background as on the glasses, upsets the visual relationship between the viewer and his environment less than the garish omnipresence of magenta, the frontal symmetry and the abundance of frames mentioned above. These few examples highlight how the perceptual effect exerted by the piece is based on a kind of ”two-tier pictoriality” : alternating the blatant and subtle, from the ostentation of decor to the austerity of detail.