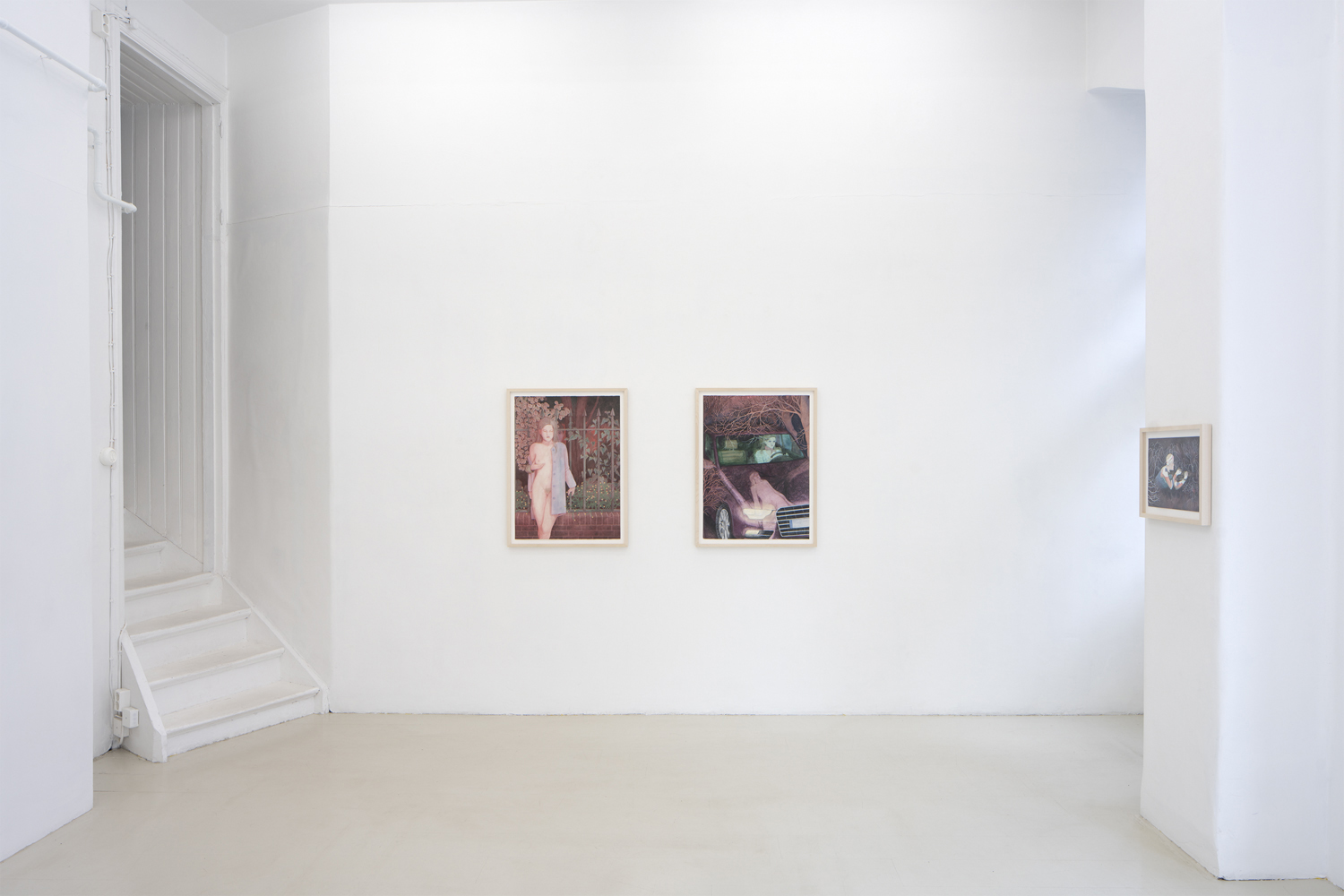 Spring in Scandinavia is a unique moment of the year. After the long white and dark winter and the as well long fall season, with its grey rains and fogs, nature comes back to life. Like most seasons in the north of the world, this comes as an apotheosis. Forced by the latitude to make the best of the few days before the cold swiftly returns, nature explodes in a paroxysm of life. Trees, plants, animals and insects seemingly dead for months, awaken and blossom in a thousand colours, buzzes and greens and fill the still chilly air, the grey winter forests, the dry grasslands. One of the first flowers to announce this thrilling moment of the year, often stemming out of the still present snow, are the purple crocus flowers (krokus in Norwegian). Using the powerful symbology of these plants as point of departure, Krokus, a solo exhibition by Oda Iselin Sønderland, conjures a deep connection to wild nature and its seasons, to the forest landscape of Norway, its oneiric depiction and pagan roots, crystallising them as catalysts for an intimate narrative, fascinating and bewildering at the same time.

Dreams fill a great part of our life, and, as much as the reason for which they happen remains unexplained, their importance feels at once natural and intuitive. The oneiric world is crucial to many cultures and this has been valid also for Norse culture where dreams were interpreted as potential foretellers of the future. One could take as an example the famous dream of Queen Ragnhild, who reigned in Norway during the IX century alongside King Halfdan the Black. One night, Ragnhild dreamed that she took a brooch off of her cloak and held it out in front of her. Roots immediately began trailing out of it and toward the ground, where they took hold. Branches then shot up from the brooch, and the tree soon grew so tall that Ragnhild was unable to see over it. The tree’s bowl was blood-red, its upper trunk green, and its branches snowy white. The branches spread out to cover all of Norway, and even extended into other lands as well.(1) One cannot help but imagine this scene as belonging to one of Sønderland’s paintings. Yet, differently from the dreams of a queen, what is found in the delicate yet incisive pictures by the Norwegian-Irish artist is the world of a young woman who grew up close to the forests surrounding Oslo and now lives in the overwhelming yet exciting metropolitan London. As she depicts her fantasies and fears, her desires and intimate feelings, one should beware, although, not to read too literally through these images. The often complex game of frames and images inscribed within images, so peculiar of Sønderland’s paintings, should in fact act as a reminder of how what is represented here is a realm in itself, a liminal world where the artist’s waking reality meets and merges with her subconscious. Sønderland’s paintings are cryptic and intimate at once, depicting an allegorical world that does not allow, and neither requires, full comprehension: a place where technology intertwines with nature, love with fairytales, life with dreams. And in the same way as our dreams leave us puzzled, smitten and confused, these works are similarly able to strike us deeply with the force of their alien images, their bodily yearnings and bewildering details.

For Sønderland, this particular space of liminality, of blurred borders and boundaries, is intrinsically connected with nature, and in specific with the unique wilderness of central Scandinavia. A nature linked to a profound pagan history and tradition, a nature that can be magic and terrible, dark and yet so brightly alive. Sønderland invites us here to witness the powerful moment of awakening of this very nature, a moment in between the long sleep of winter and the frenzy of summer, where dreams are still attached to all things as thin, glimmering, gossamer threads. This is the beginning of a season that harbours both hope and fear for the unforeseeable, a symbol not so easy to decipher, where, in rebirth, life and death hold hands in circle. Krokus guides us to this place of yearning, existing between past, present and future, between states and lands, fantasies and memories, love and fear, a place that Sønderland has described, by borrowing Björk lyrics: “While you are away / My heart comes undone / Slowly unravels / In a ball of yarn // The devil collects it / With a grin / Our love / In a ball of yarn // He’ll never return it / So when you come back / We’ll have to make new love.” (2)

(1) Edward Oswald Gabriel Turville-Petre, Nine Norse Studies (1972). Years later, Ragnhild realised the significance of the dream: the tree symbolised her descendants. Her son, Harald Finehair, was to become the first ruler of all of Norway. The tree’s blood-red bowl symbolised the bloodshed that would occur while Harald was coming to power, the green upper trunk the vigour and glory of his reign, and the white branches his own descendants, from whom would come Norway’s rulers for many generations.
(2) Björk, Unravel from the album Homogenic (1997).

All pictures courtesy of Oda Iselin Sønderland and NEVVEN.
Photography by David Eng.