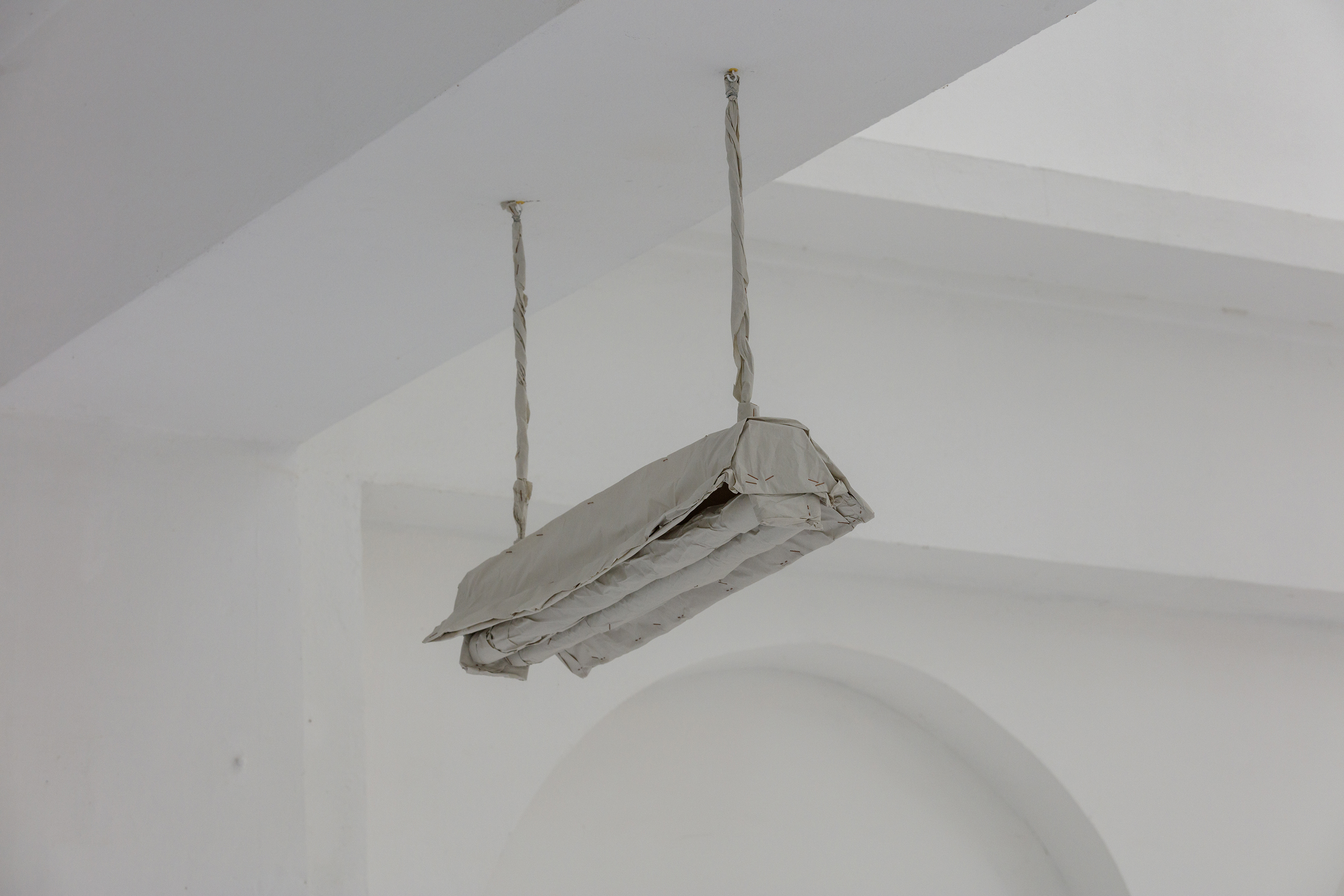 The artistic practice of Patrick Pion combines sculptures, photographs, drawings, sounds, and videos in a coherent ensemble in which each medium dialogues, reproduces, responds, and aligns in a profound and muted mise-en-abyme. Having worked as a duo
with artist Paule Combey until 2013 under the name of CombeyPion, he now pursues his research by developing new experiments.

Fuelled at once by psychoanalysis, philosophy, electroacoustic music, and the German (expressionist) and Russian (constructivist) avant-gardes, the works of Patrik Pion appear as doubles, mnemonic images that do not aim to represent the real at all. While his research focuses on the way in which the mind constructs itself based on this reality, it is more the representation of this construction that is at play in his creations. Among them are found “white objects”, objects from everyday life (lemon squeezers, shoes, toothbrushes, flashlights, guns, syringes, etc.), object-sculptures created from blank stapled newspapers. While their disproportionate scale lends them
a burlesque appearance reminiscent of the sculptures of Claes Oldenburg and Coosje Van Bruggen, the austerity of their whiteness actually distances them from an attempt at fascination with the manufactured object, as developed by pop art and its corollaries. Without seeking to represent or reproduce, these objects are imperfect doubles, made from memory. Because they emerge as memories, from photographs of the mind, from ghostly traces, they do not figure the object as such, but invite introspection, a dive into the individual or collective psyche, which entirely constitutes the subconscious of our world.

The videos, photographs, and drawings of Patrik Pion created based on these objects multiply their presence through a spectral imagery akin to expressionist cinema. As photographs, they are enlarged to a monumental scale. As drawings, they clash on paper in very large formats and appear to float, weightlessly. The artist’s recent video works present a series of short sequences illustrating snippets of
daily life (a fragment of a ride on the metro, traffic on the Parisian ring-road, etc.) or videos of phrases scanning pathological states, essentially emerging from mass movements. Excerpted mostly from books by Sigmund Freud, Cynthia Fleury, Hermann Broch, or Axel Honneth, and decontextualised, they turn on helicoidal axes against an empty background. The artist accords great importance to auditive atmospheres, recordings that are also reworked elements from daily life, elongated, distorted, and producing – in unison with all of the artworks – something like an echo perceived in the deepest part of our consciousness.

Group clinical psychology constitutes one of the axes of his artistic praxis,
in which the analysis and mode of representation of emotions predominate. It is an examination of the construction of the subject, its role in the collective and, among other things, about the subject/object relationship in our societies. His work is informed by his experience of workshops undertaken with patients at the Georges Sand psychiatric hospital in Bourges1. Attentive to institutional psychotherapy of the clinique de Borde2, and to the theories of anti-psychiatry3, Patrik Pion and Paule Combey took a more specific interest in manifestations of psychosis. This “Generativ Process” workshop programme4 aimed to engender evolving psychic processes of creation, through an exchange and shared experimentation; to foster desire; to research and generate new types of relationships based on creation, based on spatiotemporal
artistic energy in the most extensive way possible, thus combining painting, sculpture, installation, performance, body art, etc., music and the world of sound, in order to bring in different perceptual approaches, so that something of the order of the visible is manifested, without however resembling an object, thus encouraging the presence and role of the subject… It’s a sensitive experiment with oneself and others, through art, within a mannered relationship.5

On the occasion of his exhibition La perte du bonheur (the loss of happiness) at the Centre d’art contemporain – la synagogue de Delme, the artist used a quote from Sigmund Freud to question the future of the notion of happiness in the contemporary world. Now emerging as an order in a society relying on well-being, care, and positive psychology, the search for happiness – or an obsession with it – appears more as a reflection of “happycracy”6 (a failure to prevent the rise in depressive states and reliance on antidepressants (cf. the opiates crisis in the USA)) rather than as a sincere accompaniment to the emancipation of peoples. La perte du bonheur questions, through a series of sculptures, drawings, and videos, the future of this essential notion for the construction of the subject and its undeniable need to be reclaimed by liberated subjectivities.

The exhibition La perte du bonheur by Patrik Pion will be accompanied by a publication by Paraguay Press, edited in partnership with the gallery Valeria Cetraro, Paris.