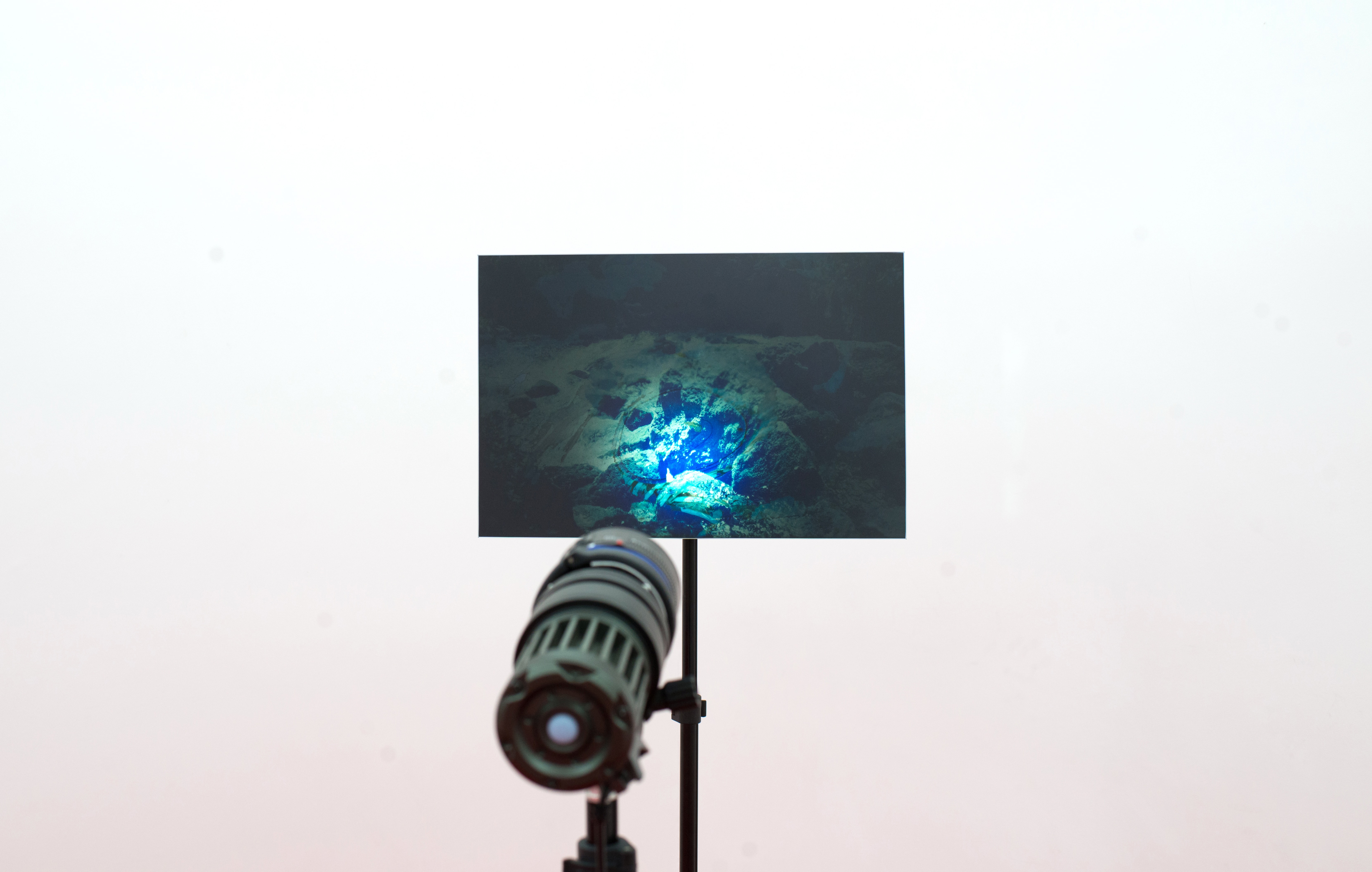 I let you introduce yourself to know a bit more about you.

I pursue my artistic approach since almost a decade now, I went to l’Ecole des Beaux Arts in Valence and then in the Villa Arson, Nice. Afterwards I moved to Australia for a while and now I work in Paris. I started with painting and photography and quickly move to editing digital movies. I was both interested by the pictural aspect of images and the relationship they have with time. Since then, I nourish an interest for installations including videos projection or slideshows.

I guess i try to maintain an open dialogue between the appearance of the images, what they are made of, what they show us, and the space around.

My approach increased with light installations, digital videos, original slides or mediums involving images bound to photography but mostly it’s connected to a temporality which I’m playing with in order to create a bigger spectrum of perception.

In recent years, I have also experimented with different material ways of experiencing a kind of “living aesthetic of archives”. These may include printed fabrics, jacketed patches, glass collages, mirror prints, and so on. In the end, I sometimes have a form of transition: between the domestic abstraction and the object. Some interesting tracks for me.

So you work with image for its own nature, you don’t shoot images yourself. How do you pick images for your work ?

The fantasy would be to not choose at all but it naturally happens. Images come a bit randomly at the studio. Most of the time it’s a friend or someone I know who found a stock. Once I receive it, I look at each image and later, I classify them according to different criterias such as color, representation, over exposure, etc.

I try easy gestures, sometimes it’s here before trying or sometimes it’s because I have new images and it involves a new action. As an example, for the installation « Contre jour », the idea was to put underexposed interiors, cut out inside exposed landscape images. It merges from a simple idea of cutting, contrast,  and inclusion, then I started to manipulate images. According to the act or the idea, a part of the work is usable. For the other part, sometimes I never use it and sometimes I keep it for later.

So you ignore the background behind your images ?

Yes, most of the time. Although, in my first installation with slides, I found a stock of it  that my dad took. I discovered all these holiday pictures in a drawer and it was only landscapes ones.  I kept them for a long time and finally put together an installation named « Vallée ». It’s a kind of reverse stereoscopy but made of two different landscapes on the same screen which creates a third one, even though this one doesn’t exist in reality. Thanks to luminous addition it blended perfectly. So for this one their was a private connection but it wasn’t too obvious. Also, for the work « Plein soleil », it’s the same, I picked slides from landscapes which reminded to the postcard aesthetics.  So from this it arose common places and show some kind of incomplete emancipation  in our way of taking pictures. The education is nearly part of our unconscious. Moreover, without seeking for a touristic perception, I could appropriate to my work something as part of the collective unconscious.  I don’t claim a critic on these norms but it allows me to adapt to images easier than family portrait.

Do you consider the image as your medium ?

Yes in a way, as I don’t claim any speech towards photography. I focus on the image itself and not what it represents. It’s rather the relation to the space, the time and the memory ; in which way a certain aesthetics of time can fit in with a medium. I establish an interest in the appropriation and translation towards another way, through a gesture which aims to perceive from a different angle.

Also, the notion of archive appears paradoxical in your approach as you uses old images but you also let them disappear along the process. It seems challenging in our perception of the art world (market) in a way.

It’s complicated to take position according to the art market. But yes, I burn my images because my interest is in the action and it goes beyond preservation esteem and the market value. The work sustains itself with those images, through out the disappearance implied by the process. I pay attention to various stages which I can go back to. Images happened at a special time, then they get photographed and (digitally) archived. For example the image on the velvet jacket (cover), through this act of transfer, it already doesn’t exist anymore, it becomes a living archive. And also these jackets are all unique. The art market is based on the value of things and their oddity but if you do something unique in space and time it’s not that easy.

Yes, it’s about our way to consider the art market and its economy. It seems to invest in durability of the work in a way.

Exactly. And it really challenges our perception on contemporary art since at least the 60’s.  That’s where it becomes interesting because actually, it’s the reality of art. The quest to immortality is strange in a way. Time has an impact on the work, the immortal side is absolutely artificial.

Also the notion of anachronism appears recurrent through out your work. You use carousel, projector, but time to time it creates a shift with images. Is it important to you ?

Yes it is. The gesture bounds to anachronism is to mix times aesthetics. While I attempt to avoid to produce a statement towards the free nostalgia because I don’t recognize myself in this. My statement goes beyond the temporal aspect.

Anachronism occurs to get outside of what the image represents in time. For my first actions I was doing 3D, then I used 3D with analog photography by dropping reproduction on virtual universes.  Then I manipulated original slides which allowed me to do a movement close to painting – with physical materials – ; also I had to keep on mind what I did before in order to re-inject it. Eventually, I found a deep interest into virtuality and simulated universes. I’m less interested into the “archive side” of slides. For the work « Plein Soleil », which is a total of 81 perforated landscape slides, it’s not what it represents that come first to your perception, i mean colors, texture and the gesture itself makes even more sens than the photographed places.

What about the video in your work ?

I use it less than before, as I tend to reduce the movement

So from video to photography, your images are not always on their own but they take part in a bigger installation, which echo does it give ?

Yes, I want image to be part of a whole as it comes from a statement about the out of range part. So, most of the time, my images are at the limit of the movement. As well as cinema and video keep increasing my interest because it acknowledges time. Thus, my work attempts to go along with the rooted image at the limit of this movement.

Also do you consider the screen as an important part of your approach ?

Yes because I began with works on screens. Afterwards a printed material can be a screen but without projector. The screen is what stands for a filter in between and gives visibility to the image. But it’s also a form for itself and I can remove the device and use the screen as an autonomous object.

At the beginning you spoke about the image and its importance within the space, does the exhibition space takes an important part through your display ?

Of course it’s important. Sometimes I like to play with artificial light or natural light. If there is an opportunity to adapt the space I embrace it. There is no accurate process but some pieces work better with more or less light. It would be a shame to cut the work from the exhibition context and  keep art from acknowledging the space in the display. For example, I’m not at this point but I really appreciate Pierre Huyghe approach where the work blends into life.

To me it’s necessary to have a statement connected and opens on the outside. In a way, it prevents from thinking the exhibition space as a self-sufficient area whereas my work isn’t a social art. But to immerse oneself into the image, there is the suspensional disbelief and it’s the same one within the outside. Therefore it’s essential to create an echo with the outside world. Sometimes it happens because of a contrast from this outside world but it doesn’t involve the same cliché about the gallery space.

As you manipulate images, removes or cut a part of it, do you consider that we can’t really get the whole image.

The idea is about images crossed by a space or a light or what make the image visible. So yes we can never understand or consider an image entirely. I can remove a part of the image to obtain something from the act and to create a temporal loop. While I cut or inject ink, I give an exposure time. It creates a time where the artwork will be exhibited and a time where the image while say something. Therefore, it becomes autonomous before moving the exhibition to another place. It’s accurate because of the balance. Sometimes what allows the image to be stimulated comes out from a removal.

What would be your dream place to exhibit your work ?

I guess it’s maybe cause I’ve got a suburban childhood, and because my work is a lot  influenced by west coast american artists from the 60’s to the 80′, but I would love to exhibit in one, or if it’s a dream, all of the houses from the Case study houses program in California from architects such as Richard Neutra, Peter Koenig, Charles and Ray Eames, etc. and be able to do whatever I would like to inside.

Well, for me i will say that Art is a word defining a domain of stuffs that are entierly or partialy emancipate from other translating systems – systems that we use to define or name things  – in order to touch in a different way. As a practice, it can be a fail or a success but art is this domain which keeps crossing deep inside  humankind. Art is a word that is always challenged by new definitions but remains precisely where the limit of “definition” lies.