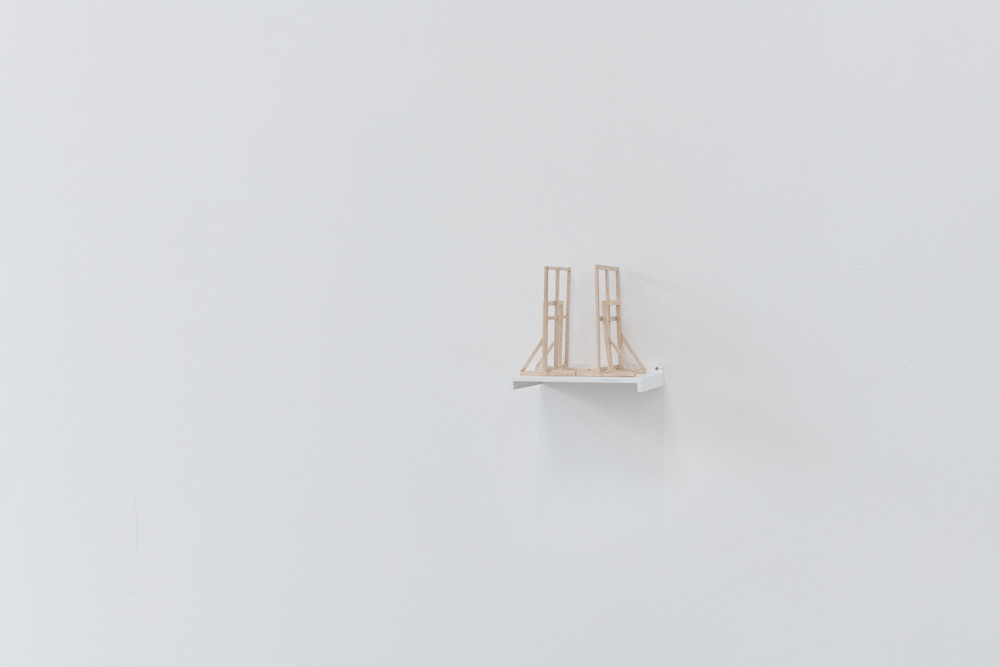 “Not to ‚capture’ or ‚decode’ the gesture: to confound himself with its secrecy.”(1)
Tom McCarthy

The gaze drifts along the contours of the room – under the pipes and conduits, between the gaps and behind the heaters. A whole ensemble of aberrations; swarming. We are familiar with the feeling when something is missing, when only a trace remains, which all at once seems to dominate the entire space. This intense moment, when the gaze falls in between things and reaches the most remote objects, is when we are made fully aware of the absence of a function. It is a paradoxical form of presence in that something seems present through its absence.

Something has nestled in the corners; pipes that correlate rooms; the interior and exterior blurring into one another; conduits leading to nothingness. The objects turn into entities rather than things as time passes. Movements in the corners of the eyes, the glances skip through the space once again. They rush over things in uncertainty, reassure themselves and re-establish the habituated sentience in perception, and yet something stays behind. The solid sensory structures are subverted and the space momentarily becomes fictional. “This can only happen [according to Mark Fisher] because the unity and transparency which we ordinarily ascribe to our minds are illusory. Gaps and inconsistencies are constitutive of what we are.“(2)

This certain presence maintained by something that once was there and now has changed or disappeared remains essential to the event. The narrative lives off of that which has been manipulated. The sense of the uncanny arises when presence and absence shift into one another, even though they are in fact mutually exclusive. “Something Where There Should Be Nothing: Nothing Where There Should Be Something.“(3) The third which is barely tangible, negotiating between the counterpart of presence and absence, is ultimately what enables the meaning of the former. It seems of no interest to resolve this dilemma for a dichotomous step-by-step of something or nothing. To capture, not to decode, the mystery for a brief moment…To hide what is shown.