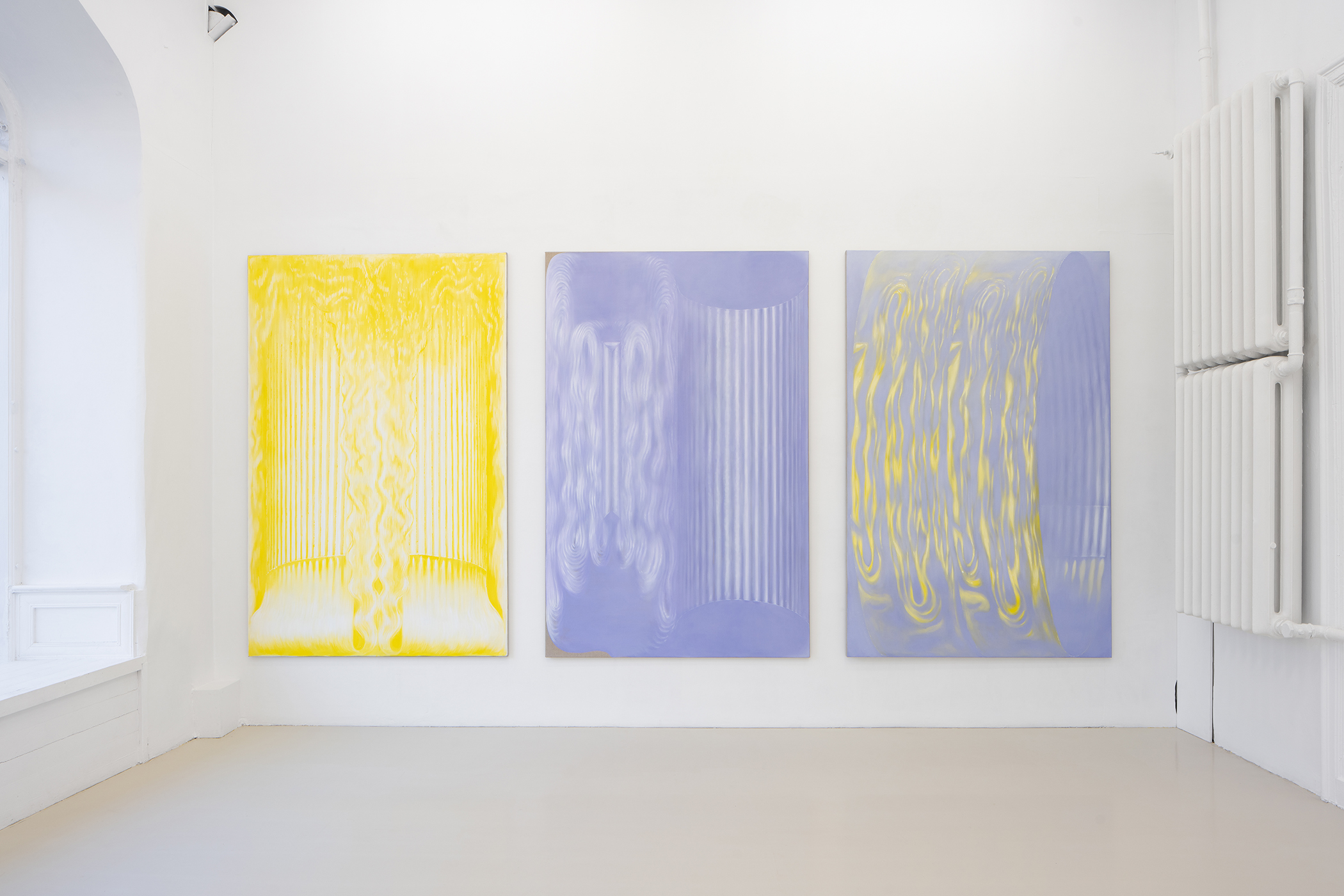 NEVVEN is proud to present Pale Echo a solo show by Vienna based Lithuanian born artist Vika Prokopaviciute, presenting a new body of paintings in a site specific installation where the subject matter adapts and responds to the architecture of the gallery in a scientific and lyrical interpretation, physically engaging with the viewer through what could be defined as a synaesthetic abstraction.

Prokopaviciute is a painter but started her instruction studying at the Samara University of Architecture and Engineering in Russia. She then moved to Vienna where she studied at the University of Applied Arts and where she started her career as an artist. The works included in Pale Echo started as a reflection on the symmetrical nature of the palindrome NEVVEN and on the physical phenomena of echo and reflection. Inspired by the architectonic peculiarities of the gallery space, where thin and tall doors are juxtaposed to peculiarly large heating elements and an imposing window, each work made by Prokopaviciute is the result (as usual to her practice) of a method, a structured system that she invents and then almost scientifically applies to her works. Here, each painting is grounded on the one preceding it, and each painting analyses the context in which is to be placed and the very instruments used to make it. Pale Yellow was the first work to be executed and it stemmed from a previous painterly investigation on the actual brushes used by the artist, but now those brushes are deformed in a symmetrical representation, reminding faintly of the gallery’s window top and tall radiators. The following painting, Purple Pale Pale, takes this subject and replicates it juxtaposed to a form which now clearly depict the heaters, only to be ulteriorly deformed by the following and final large work included in the show, Pale Pale Circle, which seemingly mixes the previous two and creates a passage, a circle that placed by the entrance door of the gallery symbolises and pictorially recalls it. Completed by the small format works titled FN (as for footnotes), these works are not only connected in their subject matter, but placed in the space mirroring each other and surrounded by the very features that inspired them, in an effect that amplifies and reifies physically what was symbolically represented in their execution. The acoustic phenomena is here turned visual in a painterly synaesthesia.

Through the use of perfectly complementary tones, the idea of mirror and reflection is further developed in a more intricate metaphor. As a mirror that reflects the reverse image of the beholder, in this visual echo chamber the primary yellow meets violet as its opposite and at the same time its double. Mirrors reflects but also deform and deceive, as much as the echo is a physical phenomenon but also source of illusion and delusion. It is no chance so that at the core of this show for the artist there are not only methodologies but also ancient mythologies. Echo was the mountain nymph turned capable only to repeat the words spoken to her because of the curse of Hera, jealous of her husband Zeus in Ovid’s Metamorphoses. She fell in love with Narcissus but never managed to express such affection, while watching Narcissus falling in love with his own reflection and eventually being destroyed by it. Pale Echo is all this: a circular process of love and wrath, an almost destabilising play of mirror between reflections and methodologies in which nature, feelings and science mix with the mathematics of colours and the simple abstract language of these paintings, physically affecting our perception, while playing with our minds and maybe our hearts too.