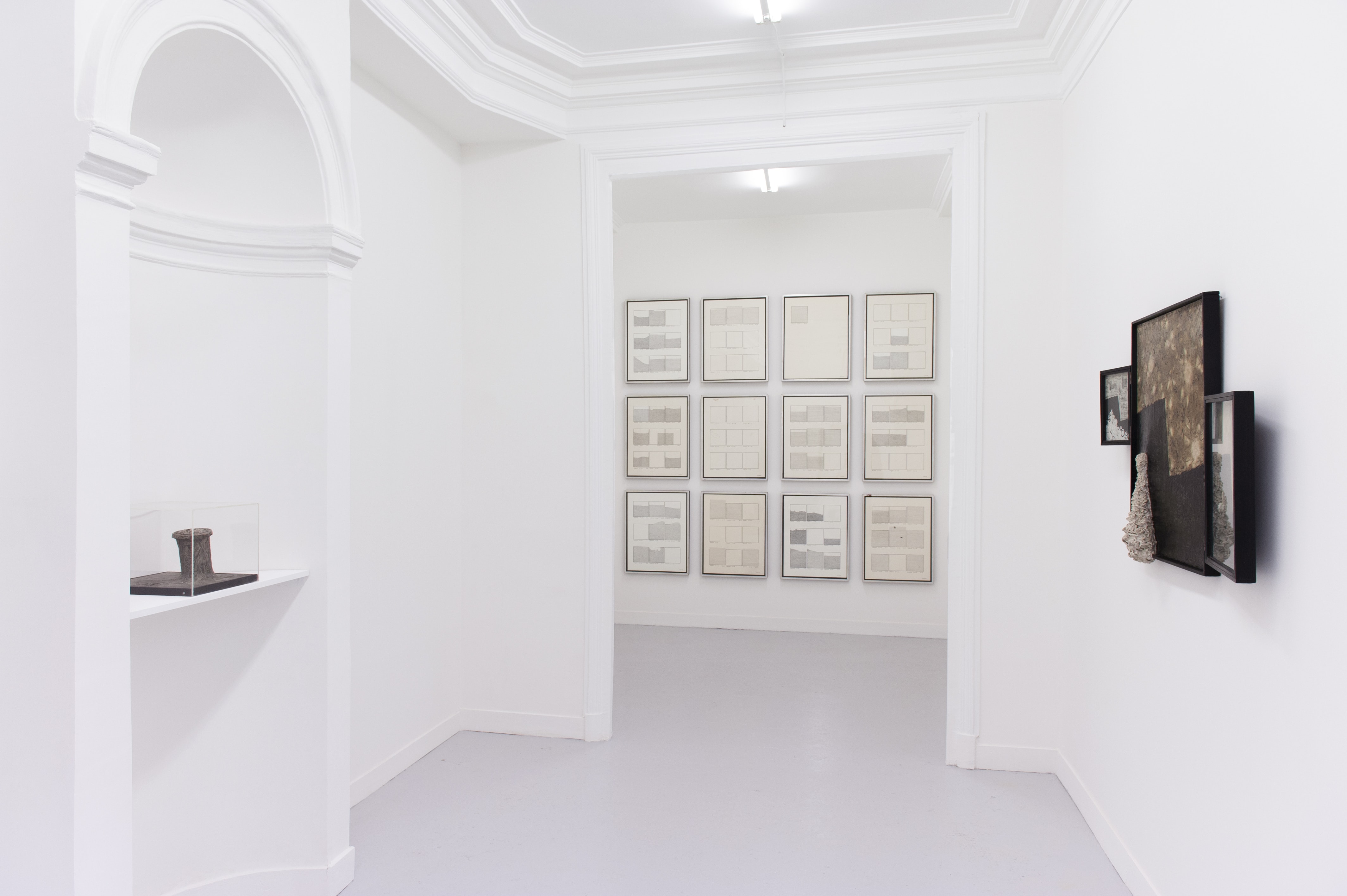 The Galerie Pauline Pavec opened in February 2018, Pauline accompanied by Quentin Derouet knew how to make an asset of their complementary experience as art historian and an artist, developing their curatorial practice over their young careers until they launch their own space in Paris.

Can you summarize your background?

Pauline: During my studies at l’École du Louvre – which I am still pursuing –  I specialized in contemporary art. In 2013, I founded the association of young curators named “Diametre”, we did a lot of curating, supported the young Parisian and international creation, we also had a location in Paris (71B), and this association still exists. During my placement year I went in China with Quentin during a residency. When we returned we had the opportunity to open the gallery which was at that time in the 7th arrondissement. It’s been going on for a year and we’ve just moved to Le Marais. Quentin is an artist but signs a part of his practice as a curator. We are based in between Paris and South of France, especially in l’Aveyron where he has his new studio.

What convinced you to open a gallery?

Pauline: The genesis of the gallery corresponds to my meeting with Quentin who called me to work on curatorial projects. In parallel with my academic research, my work focused on Robert Malaval whom I discovered during a first thesis on Anne Tronche (art critic who owns an influence over the Paris art scene of the 70s). Quentin studied at Beaux-Arts de Grenoble and Nice and already knew the work of Malaval.

Robert Malaval was therefore the starting point of the gallery?

Pauline: Through my research, the meeting with his daughter, Mathilde Malaval, was decisive. We did not have a gallery but the desire to make projects, discover his career and work together on the development of a catalog raisonné.

You opened a gallery by a very young age, what motivated you ?

Pauline: It was important for us to support emerging artists alongside well-known historical artists -Bram Van Velde, Hans Bellmer – and those who need a new look and be discovered by the younger generation like Malaval. We consider him as a major French artist of the 70s and this deeply marks our desires from the beginning.

Quentin: When we launched the gallery, being an artist and Pauline an art historian, we tried to apprehend art through the prism of art history itself, the commercial side was secondary, we mainly wanted to curate exhibitions. In this, opening a gallery was a challenge.

Fiona : It’s relevant through your way of working, there is the will to open on a real dialogue and research instead of a confrontation between generations.

Quentin: Ethically it was interesting to take the art market almost at odds. Showing emerging or moderately known artists who are today at the same price as Malaval, that questions the value ratio.

Pauline: We work in the same way with historical or emerging artists, for historical ones we chose, everything has to be done. Also, when we exhibit pieces of masters that we are not used to see, it reveals a not so common facet of these artists. Therefore, it allows young artists to see art history, almost with a retrospective look.

Exhibiting Malaval, and working on the catalog raisonné, it must have a strong impact on his work, whether it is at the level of the exhibition, the institutional presence or the art market.

Pauline: Of course, it is part of it. We are able to create proposions on his work, as shows in fairs, gallery exhibitions, retrospectives in museums, and it is also thanks to the work that we do.

I didn’t plan to ask you this, but why does the name of the gallery only include the name of Pauline?

Quentin: Even when curating, as an artist I was embarrassed to associate my name with a gallery. But in the end I am for what Jennifer Flay defends, it is not pretentious to give your name to a gallery, but therefore a statement about your sensitivity and it’s assuming that you have  things to say and to show publicly.

Pauline: The duo, art historian and artist matters to us. Our commitment is to have this double look although it is not claimed in the name.

Quentin: Autonomy as an artist, being free in relation to the market for the sake of art is a relevant question. In the system that we created we do what we want as we want to do.

Sometimes it doesn’t seem that easy to develop a comment, an intention in the gallery space. You both did independent curating before, how to find a balance between the two?

Pauline: I think we find our inspirations and it appears especially in group exhibitions. We pay attention to the work of curators such as Jean-Hubert Martin and Jean de Loisy, along with the exhibition Traces du Sacré (Traces of the Sacred), which mixed different cultures and eras.

Quentin: For example, the Hauser & Wirth gallery is almost a museum, most artists are estates and that’s where the gallery takes on another dimension. The Malaval exhibition that we did, we see it as a mini retrospective.

Fiona: Having the ability to bring it in the gallery space allows you to do it differently, maybe less expected.

Quentin: The institutions and museum do it better because there is more space and budget but at the gallery level it is good to make projects with the greatest possible artistic dimension. We tend to refocus on what is essential, what drives people to do art or what is art. For the future it’s full of meaning, the old will become classic. How are we going to look at a work of Rauschenberg compared to young artists? Between trends, art history interests us because access to all fields of culture and all eras is now possible.
We believe in an art form so we try to find a balance as an artist, curator and gallerist not to be sucked by the violence of the art market. In then end the same question always comes out : How to be free in the middle of all this?

Yes without being against but working with.Your participation and choice of art fairs draw my attention because you exhibited in three different kind of fairs.

Pauline: Art on Paper in Brussels, The Others in Turin and Galeristes in Paris, each of them are based on three different models, one classic and formal in the manner of major fairs, The Others was the opposite, more alternative and Galeristes is really positioned. For the future we want to climb a step above.

How is it to access fairs when you are a young gallery ?

Pauline: With your own structure it is not easy, we must make the most impacting proposal possible. We bring our touch with a huge historical artist and a young artist like when we presented Hans Bellmer alongside with Quentin.

Quentin: That does not keep us from making propositions close to research. People like art and sometimes it’s surprising to find the requirement, or it’s the most cutting-edge pieces that are bought. We believe in some things that fascinate us and fascinate important people in the art world, despite a skepticism on the market

Fiona : It’s a reality, the art market is also making art history to a certain extent.

Quentin: Exactly, it’s common dynamics. A work presented in a fair or in a gallery can become something else that does not belong only to the market. Where a gallery plays a decisive role is that if the artist integrates the art market it will be seen from then on.

You mentioned Jean-Hubert Martin and Jean de Loisy, what are the curators or critics that you would like to mention as part of your influences?

Pauline: I am influenced by Anne Tronche, who was a talented discoverer in the 60s / 70s, she wrote about all the artists that are known today.

You also favor international collaborations with actors from the art world and especially galleries which allows a real circulation and transmission, can you tell me more about it?

Pauline: We work with different lenders and it is necessary to have exchanges with professionals who do the same job. We also work with older merchants than us and it is this dimension of handover that matters to me, to show what they had the heart to support.

What is your own definition of art ?

Art is magic, sacred. It is the aura that emerges from these objects and make them magical objects. We are not facing only a work of art but an artist who wanted to say something and who is incarnate of it.

Photographs and text courtesy of the gallery.