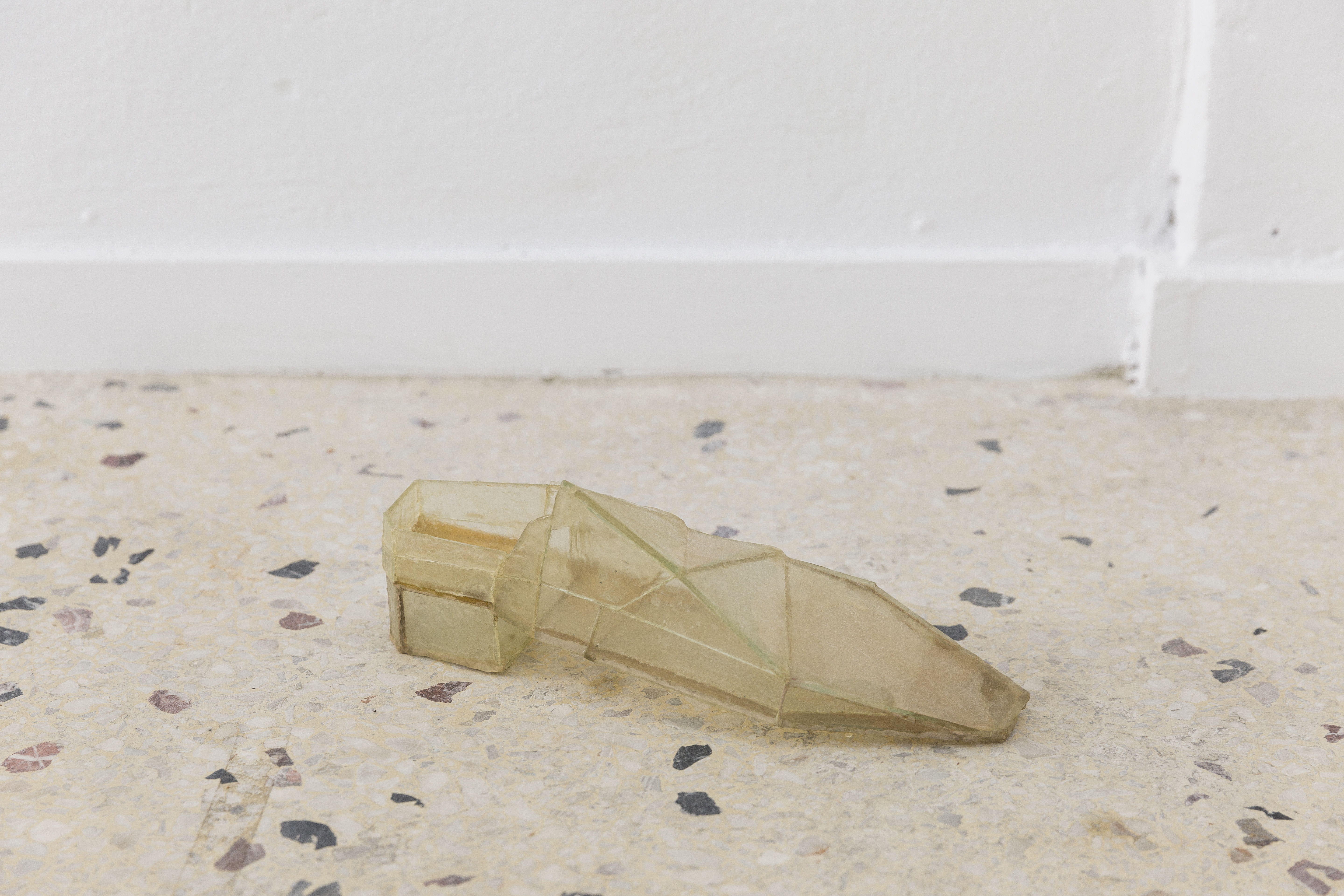 Cheese is time, time is money, money is monopoly: Not only in his art but also in his aphorisms Stefanos Kamaris formulates a critique of the commodification of capitalism. Kamaris invents instead a coherent world of his own non-representative logic that follows up the pattern of a poetic language. This art works with poetry, semiotics and politics to create a subversive, punkish, individual and original truth.

A truth you do not come across very often any more in the times of post-truth and influencing.

Originality irritates. To call Kamaris’s work “original” seems nearly understated. Plaster-Bunnies, Happy Cakes, Slot Machines, Credit Rocks, PacMen, Fried Eggs, Jesus Jars, Flamboyant Sponges, Adams&Eves and Great Great Grand Fathers. Some of these artworks are made out of pillows and cigarettes, some of them use plaster and concrete and dead fishes, but a lot are made out of cheese. Babybel Cheese, Emmental Cheese – and let’s not forget the Danish Blue Cheese. All these cheese types are crudely preserved in resin: good for the cheese, not so good for the artist working with it.

The combination of cheese and the 1980’s arcade video game “Pac-Man” in “Pac Man Giga” – one heavy labyrinth made out of Emmental Cheese and concrete and resin where a little Babybel PacMan tries to make its way through the exuberance of nutrition – can be read as a signifier for the postmodern consumer society and its unproductive consumption. The name “Pac-Man” derives from the Japanese onomatopoeietic “paku paku” for “repeatedly opening and closing the mouth”. In the game the player controls Pac-Man, who must swallow all the dots inside to avoid four colored ghosts. In Kamaris’ work “Pac-Man Giga”, the Babybel is not connected to the joystick at the side of the artwork, so unfortunately Babybel Pac-Man can’t swallow anything. He is stuck – stuck in the omnipresence of possibilities without any chance to use them. One moment in time frozen forever in a lot of ghastly resin, a strong image for the radical suspension of meaning, the signifying process that leads to a specter in the world of Jacques Derrida – and maybe in the world of Stef Kamaris as well: There is a ghost in my house.

The situationists had their own strategy to deal with the slogans and logos of the capitalist system of their time – they inverted them and turned them against the advertising companies and the political status quo. This détournement became famous with the punks of the 1970s, when Sid Vicious was displaying
a swastika on his rotten leather jacket. When Stef is constructing an E-Mail out of concrete and ceramic, he works with this kind of detour, deconstructing sense. Mapping something onto itself that only exists

in virtual reality and by that re-modeling a function of the Digital Capitalism of our times as a real object, Kamaris creates an irony that works with detournement but also with semiotics and symbols, developing further strategies of the situationists and the surrealists. This kind of radicalization of aesthetic means and aesthetic meaning that is aware of its own history seems to be something like a hallmark of

Stef Kamaris’s sculptures – next to their organic composition.

Who creates the volatile “Blue Hour” with a clock made from blue Danish cheese if not somebody who really wants to know what it means to be a materialist? Being determines consciousness – Karl Marx knew it, and Kamaris knows it too. Who works with “Selaginella Lepidophylla”, a resurrection plant if not somebody who would like to show that time might be cyclic? Hélène Cixous knew it, and Kamaris knows it too. Surrealism might still lead art’s epistemic politics: The Fish doesn’t think/The Fish is mute, expressionless/The Fish doesn’t think because the fish knows everything: Iggy Pop knew it when he wrote the soundtrack for Arizona Dream, and Stef Kamaris knew it too when he created his

Everybody is a layman at the beginning of the game – that is player wisdom, and Stef Kamaris plays hard in a way that shows no mercy, just indefinite imagination. His art works are for sure more than “mere re- presentation” the critical remark Guy Debord started his “The Society of the Spectacle” with; Kamaris is not adding to the spectacle, his sculptures create new ciphers to contemplate on it. Ciphers for time, for being in the know (being hip), ciphers for luck that might be as relative as the notion of money, ciphers for life as an arcade where you put money in the slot machine and put up your hopes. A cipher for Las Vegas – and a cipher for leaving Las Vegas.