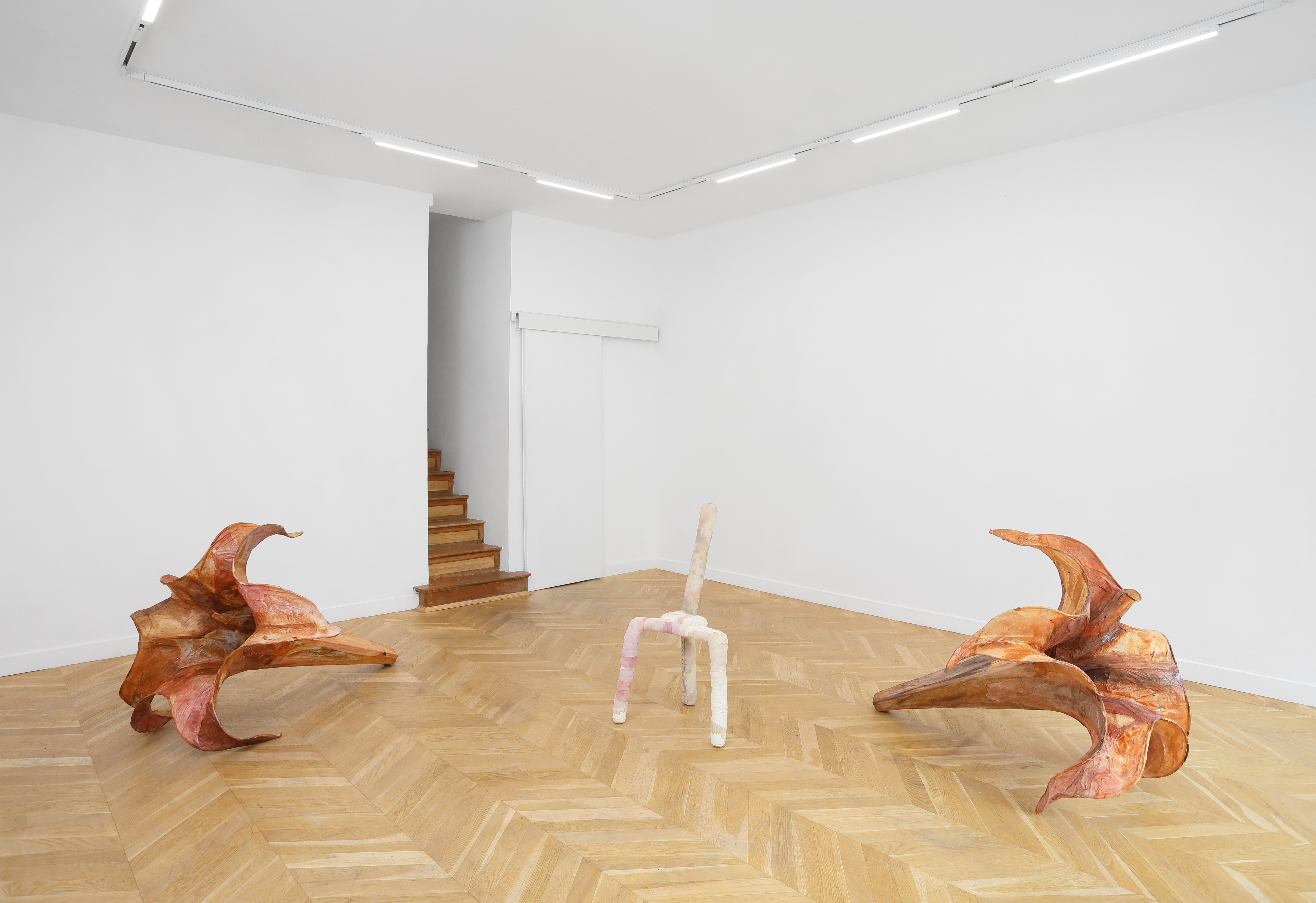 RAMA DA SASA SAY SO AND I

Antonia Brown and Chloé Royer have a shared taste for care, recipes and material torsion. The ambiguous shapes they produce, and in which nature is disguised as organic limbs, borrow their sinuous contours from entities found in flora and fauna. Gathered under the auspices of a sacred precept here hijacked to fully expe- rience its potential, Antonia Brown and Chloé Royer perform white magic to mend bodies and heal memories.

The two artists engage in rituals that infuse their creations, conferring them a bewitching character by means of a body history firmly embedded in aching limbs, a floral commemora- tion to restore its lost uses or a straightforward manipulation of the matter to reappropriate one’s own physicality.

Chloé Royer uses naturally pigmented fabrics to bandage the sculptures scattered throughout the exhibition space. Such a practice translates the material aspect of her gesture, and brings her into a physical and almost intimate relationship with the pieces that she cares for with this wrapping technique. Her hybrid seating, part of the Tender Skin series, recalls indeterminate, animal or skeletal forms, naked flesh and exposed wounds. The protruding sculptures displayed on the wall can be perceived as objects of talismanic value that nest and respond to each other. The linen which envelops Chloé Royer’s sculptures is as much a membrane acting as a cataplasm as it suggests an intriguing reference to corporal punishment by the ties and knottings compres- sing these mutant anatomies.

This physical repair is matched by Antonia Brown’s work of memorial restoration. The artist turns her gaze and research to the movement and transfer of plants as intended acts of dislocation to ask how plants have been sought out across cultural history in search of healing, fertility or intoxication. Here, plants are approached as both containers and surrogates for certain histories; in this process, material webs emerge between these containers. For the exhibition, she produces a version of absinthe where she replaces artemisia absinthium with artemisia afra, its Southern African counterpart. Through this act of re-appropriation, she intervenes with a European technique used in the 18th century.

In the same way that Chloe Royer dyes fabrics with natural decoctions of various plant elements and fruits, Antonia Brown soaks textiles with liquids prepared from borage, onions, oxides, sands, copper and metal, in reference to the body’s temperaments. She evokes “humoral complexions” that derive from medieval me- dicine to redraw a memory of a body that has undergone history alterations. The suspended vulva-like silk pieces and the semi-transparent domes of Moonflowers are offered to the contemplation of the spectators from the functional sculptures of Chloé Royer. She thus solicits a physical encounter with new bodies that she tends to tame.

The body – whether human, inanimate, plant or animal – serves as an archive in their works, retaining the stigma of personal or cultural trauma. Both artists cultivate empathetic or emotional ties with these anthro- pomorphic objects involved in a healing mechanism.

While they both delight in the deliberate indeterminacy of beings intersecting and merging to become others, they also investigate their own bodies. Chloé Royer questions non-verbal modes of communication in an attempt to reactivate our animal instincts, for Antonia Brown converts flowers into female organs, diges- tive and gestational cavities. The symbiotic dialogue arising between their respective practices denies any form of body assignment or labelling in favor of a reflection on otherness and inter-species communication. Consistent with the formula Rama da sasa say so and, here resonating as an enigmatic omen, Chloé Royer and Antonia Brown’s textile sculptures remind us of our own unsettling connection to the natural world.