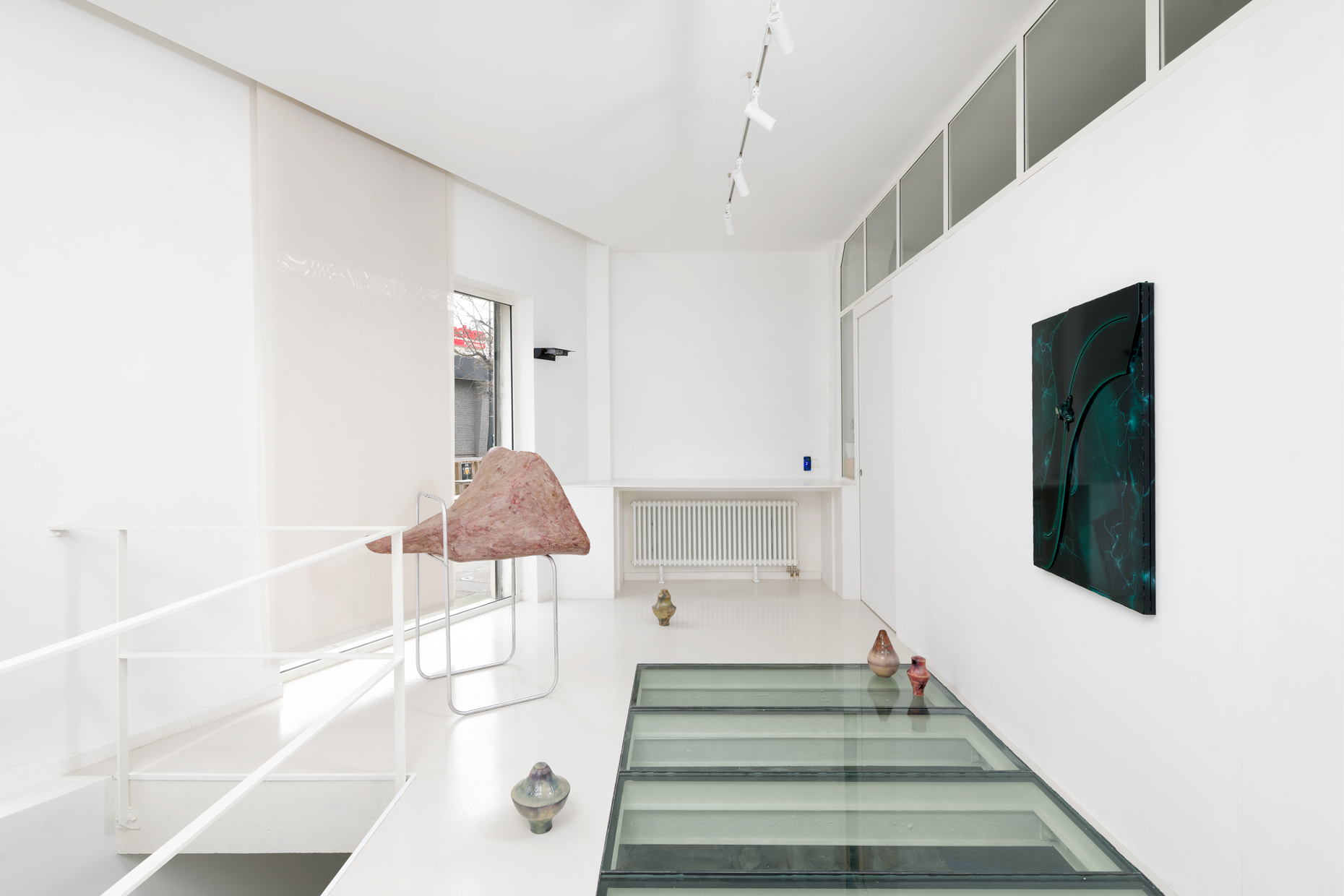 Sleep No More is a borrowed title, originally suggested by director Don Siegel but discarded for marketing reasons by the producers of the science fiction film Invasion of the Body Snatchers (1956). This film is a meta-material [1] allowing us to draw out and articulate different notions embodied in the works, their production system and the underlying narratives that infuse the exhibition space.

Sleep No More and paranoia settles in.

Haven’t we already fallen into a reverse of the world, where a new temporality seems to have crept in? A false-bottomed space, where smoothness and normativity are subverted, where functions disappears other in the forms, seduced by the fiction with which reality is imbued.

Sleep No More invokes sleep as a paradoxical injunction and here takes on a logic of persistence in contrast to the care it provides. Threat, advice or lullaby. It is about embracing this ambivalence whose restful inertia seems to have failed. Don’t sleep, sleep no more. If it was the last defence against the capitalist machine, the latter has absorbed it in a time of exploitation of thought and the unconscious. To capitalise on this time of the body at rest would be equivalent to forcing it to “aligned with what is inanimate, inert or unageing”[2], concealing all emotional print, while inhaling, tirelessly, the vapours of the awakened world. Other phases of sleep would be closer to resistance than to adaptation. Sleeping more becomes a form of passive wrestling. Sleeping less is like reappropriating a stolen time.

The night arouses another attitude, that of the sleeplessness. A shared sleep functioning as a tacit social and political contract. Invisible bodies stay awake so that others are protected, rest or escape. Meanwhile, the mechanical eye, installed in the institutional body, is programmed to control. A state of wakefulness, however, calls on us to keep our eyes open to resist a mass drowsiness in the face of normative habits that infiltrate our minds in a diffuse way. A latent sleep-mode.

But who is still sleeping, who stays awake and who comes to life?

(ongoing night lights series) is a series of autonomous and discreet nightlights that Camille Brée and her friends produce, seeking special attention. While some appear as dripping excrescences that fail to escape, others materialise an affective and reassuring presence in the interstices that host them. Together, they produce an open work, offsetting the notion of author and whose function is no longer simply to enlighten but to punctuate the space with collective and friendly micro-narrations.

Kim Farkas’ sculptures are more silent and solitary. An assembly of standardised objects seems to be clouded by a coloured envelope that covers these empty shells. This transparent material, at once viscous, shiny, almost sensual, conceals subterfuges and suggests indiscernible fictions. The organic aspect of this uncanny skin is replaced by a material with an industrial glow in the work 17-12 (The water was black rather than Persian). If this pictorial vocabulary would allow to evoke the physicality of painting, a sculptural presence induces a layer of confusion, opacifying the actual origin of the fabrication of this work.

This formal doubt can be experienced in the sculptures of Christophe Lemaitre and Kim Farkas, which, despite the hermetic nature of their technological skeleton, are full of sensitive and poetic value. As awake clocks, they observe, analyse and anticipate the tilting of the Earth’s diurnal movements. The shades of luminous information are introduced into these sculptures, connected to their welcoming environment. This same natural material fuels another work by Christophe Lemaitre. An autonomous worker who at night collects an iconography extracted from a network of virtual windows connected to the world, continuously filming the evolution of natural landscapes. A form of intelligence, like an extension of the artist’s eye, hidden in an extruded and disembodied shell.

If the body seems to disappear, Laura Gozlan’s hand reinjects it and works the material of the epidermis as a unfigured or, perhaps, already disfigured texture. This visceral manifestation in the work Gorged in colours of hurt becomes the fleshy envelope of a screen that takes the place of the soul, to haunt the sculpture with words that are concerned by something missing. In Pierre Paulin’s looks, monochromatic reproductions of his wardrobe, the text infiltrates the mesh of the fabric producing sets of clothes, no longer inhabited by bodies but by his own texts. Absent works. Our voices embody their presence and dress the space of these texts, hidden in the back of a sleeve or the page of a book. On Sunday 21 March 2021, we will be the echo of a voice and the mist of our breaths will be impregnated with the words of “L’aube dans la nuit” (Dawn in the night).

[1] Like an atmosphere, a film was spread throughout the exhibition, at every layer of its concept. Invasion of the Body Snatchers (Don Siegel, 1956) became the meta-material for this exhibition. The characters, living in the fictional town of Santa Mira in California, are duplicated at night to wake up exactly the same, their memories are intact but emotions and feelings are missing, the glint of the gaze evaporated. For the protagonists, it is all about staying awake, resisting the temptation of conformism. The monster, if it is extraterrestrial, has a human face, the face of the other that we no longer recognise. Paranoia is played out on a tight level and becomes that of a daily life where human warmth has vanished. Dissemblance is possible only through doubt, intuition, neurosis. A story of doubles that has several remakes: in 1978 by Philip Kaufman and in 1993 by Abel Ferrara. An inexhaustible source, the duplication of the subject is meant to be infinite.