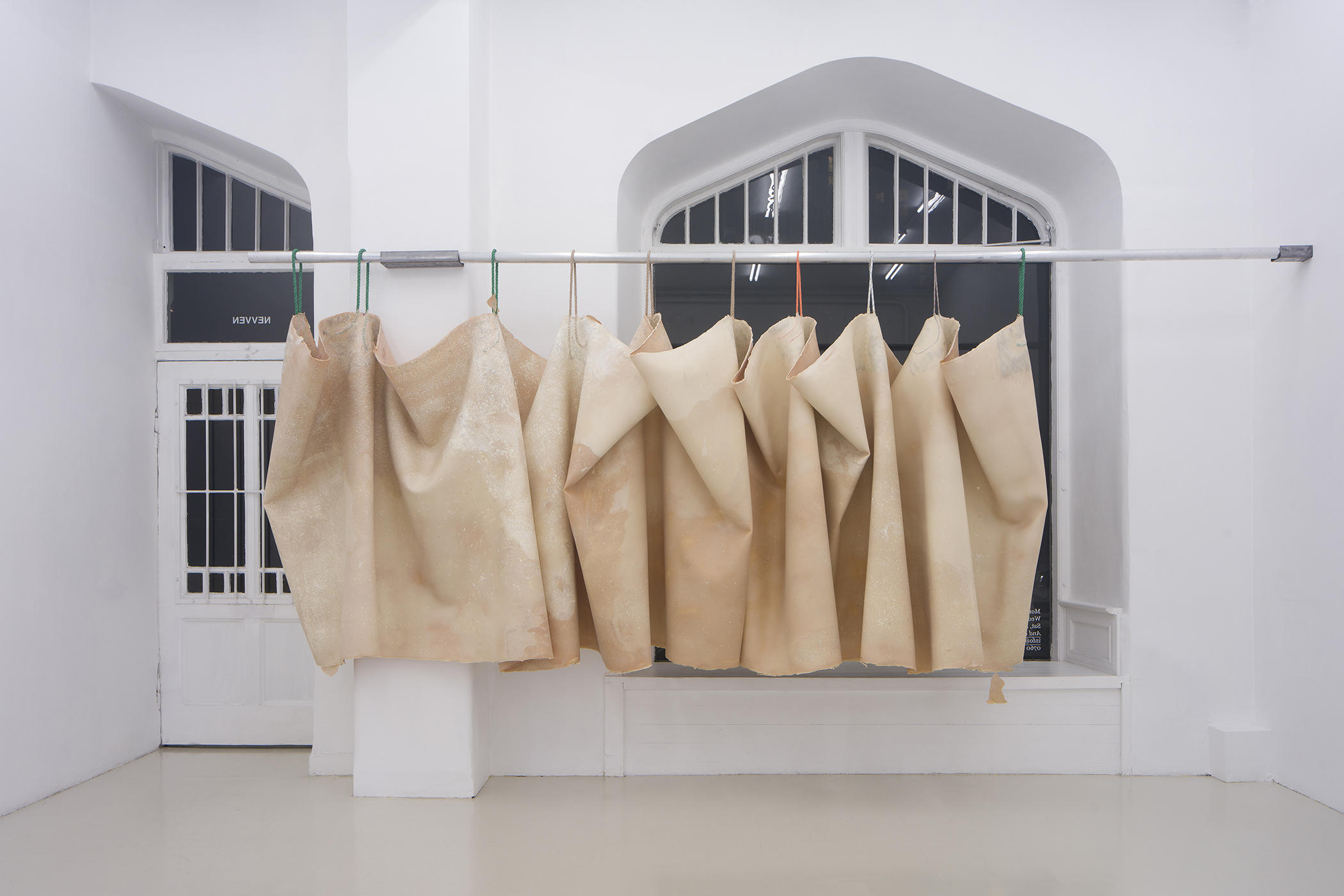 Intra-action is a term coined by quantum physicist and feminist thinker Karen Barad to describe in a new way the relation that connects humans, nature, objects and reality itself. Differently from the term interaction, which implies two or more entities in a relation existing independently from their connection, accordingly to Barad, entities arise instead from the very relations in which they are embedded. Applying this idea in the context of an art exhibition, the viewer would be then invited to focus their attention, not only on the agency that both artist and materials have, but on the resulting deeper network of relations existing within everything present in the gallery, including themselves. This “dynamism of forces,”(1) that involves all things and makes them change, influence and affect each other inseparably, is also what brings together and entangles the viewer in the complex environment of materials, intents, memories and senses composing Liesl Raff’s Smoke and Mirrors.

Entering the exhibition, the public is instantly enveloped by the odour of burning incense resin, as they notice subtle columns of smoke rising from five wall-based aluminium sculptures. Hanging from incisions made in the wall, reminding of the scarring of trees from which the now burning copal was harvested, the sculptures themselves were cast from the actual glass buckets employed in the extraction process. The large window of the gallery space is partially covered, instead, by the hanging latex sculpture Curtain. More than twelve meters long, its surface has a skin-like texture and colour, a quasi-bodily presence. It grows, like an organism, onto the jute ropes it’s hanging from and its folded surface envelops pieces of other, older, sculptures, in an act of osmotic repurposing, that appears to blur temporalities and significances. Curtain also partitions the room creating an enclosed area within the gallery, a space that uses architecture to achieve an intimate feel. It bears memories from the artist’s past, mixing a sense of vulnerability with the empowerment felt when finding a hiding place as a child: standing behind curtains, under a table, or in a closet. The soft, yet heavy surface of the latex sculpture becomes in fact a shield, behind which one can retreat, heal and rest, while the window’s glass, cut out from the artificial light, abandons its transparent nature and becomes a mirror for everything else, both outside and inside the space.

Similarly to the burning of sage, the burning of resin has a powerful ritualistic significance: it cleanses spaces, it clears them from negative energies, it makes rooms sacred and safe. And rituals, traditionally, are most of all about transformation, marking a moment of shift from one state to another. In Smoke and Mirrors Raff is enacting a ritual too, as she opens up a passage to a space within a space and invites the viewer to cross this threshold, or portal, she creates, to enter a place in which the whole body becomes involved and where the viewer is asked to embrace change, transformation, impermanence and the strength that comes with them. Using architecture and ritual, physical objects and impalpable forces, Raff creates a space that is not meant for the things that are, but for the things becoming: a “transitional place for transitional objects,” as she would define it. A place where the relation between the viewers, and everything else present, is captured in a state of entanglement, of reciprocal affectivity, which recalls the intra-action and intra-relations that Barad and modern physics find between all that exists. An almost tactile feeling that Raff invites us to experience physically, intimately and spiritually.