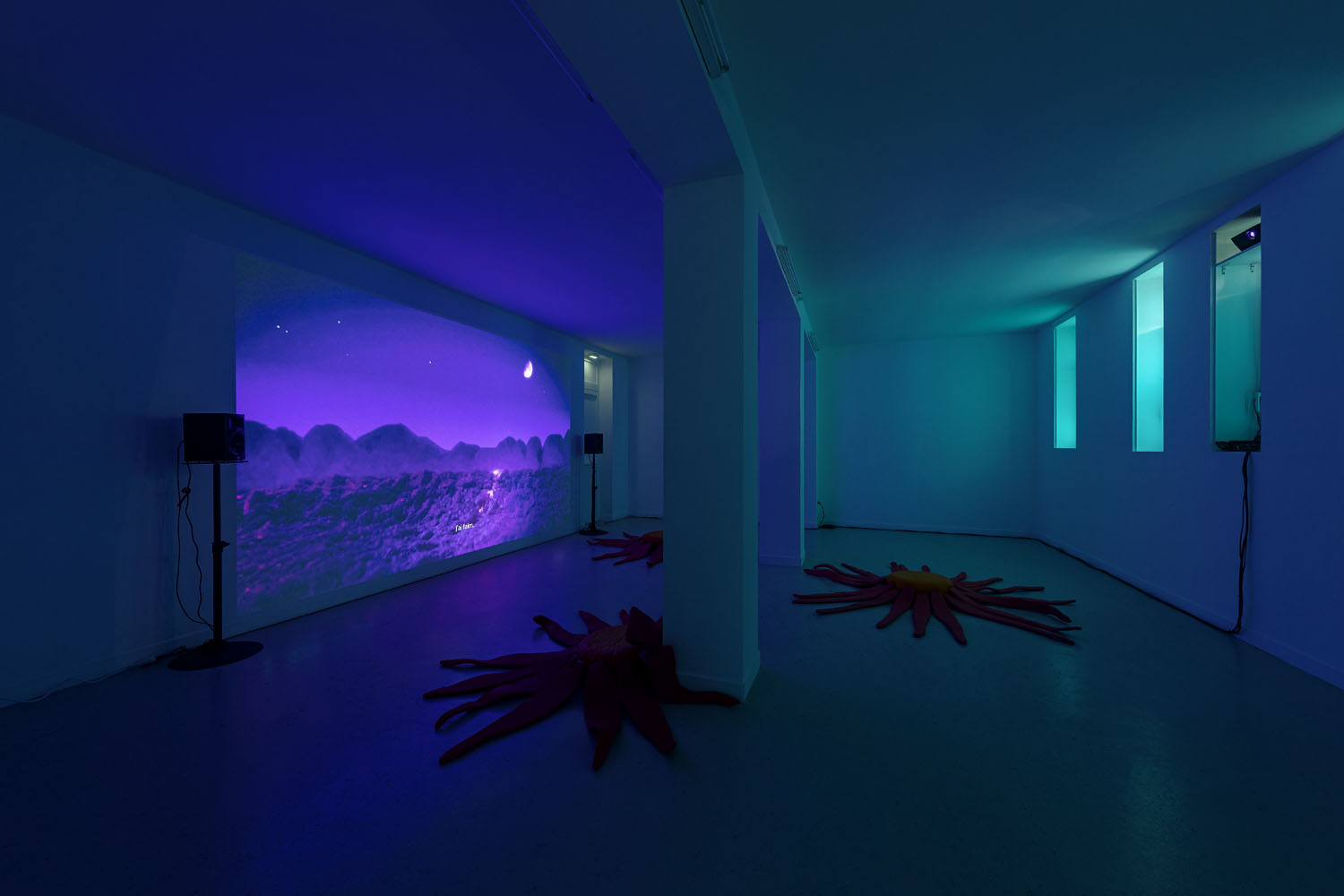 Agony, the wandering donut in the age of the post-zooproletariat

“I want to think from the here and now,

from Dolly, my sister and Oncomouse

from missing seeds and dying species

– but also, simultaneously and without contradiction,

from the staggering, unexpected, and relentlessly generative ways

in which life, as bios and as zōē is fighting back.

This is the kind of materialism that makes

an antihumanist at heart and a joyful member of multiple companion species.”[1]

In the world of Charlie Malgat, there are mouths that inhale, salivate and possess an ability to open so wide that they would be the envy of the porno-iconic version of the film Deep Throat (1972). Running counter to a supposed anatomical oddity that justifies all the contortions of the actor Linda Lovelace, Malgat’s mouths – drawn here by the artist in storyboards using crayons, or given three-dimensional form in latex sculptures – reveal a whole ancient scene. It is a tragicomic “pocket” theater featuring characters that are halfway between American pop visual culture – the infinitely replicated images of donuts or the steak and marshmallow that haunt print ads or neon signs – and the food porn of Instagram accounts. The effects are glossy, shiny, sparkling, runny, or translucent. The materials, whether detailed in their consistency and/or movement – fluid, halting, unilateral, etc. – often recall their destination, that is, to be devoured by anonymous mouths, resistant to any and all psychologizing, and anarcho-separatist. At first glance, the range of colors seen on the surfaces worked by Malgat act through compulsive binarity in the attraction/repulsion vein, which is itself agitated by the reign of a great priestess I would call Orality.

Its effigy, the open mouth, characterizes Agony, who is prey to a silent scream in the film SUGAR FREE, the first three chapters of which are being screened at Les Bains-Douches. This odyssey shows the ecological devastation inflicted on planet earth that is caused by a kind of engulfing blob, HD Steak, born of genetic manipulations originating in synthetic meat. Beneath the regular stripes of industrial post-animal meat, the character Agony takes shape : a donut with an anthropomorphic shape saved from the disasters of a meat deluge thanks to their plastic packaging, which proves especially resistant. HD Steak is the seminal character in this 2D animated story and since 2013 has reccured in the artist’s work, but today it is ceding that position to another entity, Agony. This newcomer springs from crayon drawings that have been extended to include sculptures in a range of sizes that are made from matress foam, covered with natural latex. Then, they are manipulated in front of a greenscreen and animated on computor. In their design and realization, the films are long-term projects, reflecting the time Malgat has spent experimenting in the studio and living with these objects, whose uses transcend their mere display in the usual white cube space.

Teen culture-associated media, which include comics, horror flicks, and B- and even Z-movie creations, are now surfacing in the mainstream. Let’s not forget that this culture is one of the main features of Pop Art, according to the intellectual Lucy Lippard, the first critic, I can never stress enough, to have mapped and theorized that trend along the same lines as previous avant-garde movements. Yet with this genealogical point of attachment now pinpointed and renamed, in the end we’ve said it all – and said very little. It seems to me that the world of SUGAR FREE, more than a formal analogy with Pop visual culture, indeed involves something deeper. A blind spot that apparently lies beyond simple affinities with surface effects, fueling bitter critiques leveled at the supposed apolitical nature of Pop depictions, whether they come from the East and West coasts of the United States or from Europe, from whatever gender.

Looking more closely at the storyboards of SUGAR FREE, you realize just how much the drawn and colored scenes – quite rare in storyboard use – display a certain familiarity with the plates from high school biology classes. Those strange moments when we were taught, with a great deal of objectivity and clinical distance, about our own anatomy, viz., cell, bone, muscle, active, passive, vital, and reproductive structures. In developing the world of SUGAR FREE, there is something that reminds us of the grotesquery of a situation in which adults worked like mad to put in order – through cross-sections, tables, diagrams – our emotions, organs and bodies, which generate a considerable din, thus evincing considerable vitalistic disorder. Pop’s glossy appearance conceals, as I see it, the darkness of a deep abyss where desires, our twisted limbs, and horrifico-morbid impulses intermix. The same ones that Charles Burns brilliantly depicted in his graphic novel Black Hole (1995-2005). In that apocalyptic metaphor for problems of sexuality and identity, Burns tells a story about a group of teens. The members of the group, who comes from the middle-class suburbs of an American city, contract an STD called “the Bug” that provokes spectacular physical changes that stigmatize them, forcing them to run away to live on the fringe in squats or self-managed community encampments. The scream emanating from the great big gaping mouths in Malgat’s imagery evokes a powerful and somehow mute cry in the face of an upheaval of some kind that many notice but few try to remedy.

The funereal aspect of this eros of the flesh, like synthetic surfaces with Steak cultured cell-based meat makes clear the realization that dystopian stories have banally become reality. Science fiction writing that tells stories of ultra-capitalist regimes making planet earth practically uninhabitable are a part of the modeling diagrams found in the pages of the IPCC’s most serious scientific reports.

In this particular impetus, SUGAR FREE and the travels of Agony embody a feminist anti-speciesist parable, suggesting from the hollow of the thread running through its narrative that it is high time we break with the same old tune harping on a “zooproletariat” (Rosi Braïdotti), i.e., a systematic exploitation of animal, vegetal and microbiotic species. The mouths, tongues, and ad signs that have become autonomous are “desiring machines” (Gilles Deleuze and Félix Guattari) that call for a Darwinian upending of the hierarchization of the species ruled over by heterocentric ableist white men.

As Ursula K. Le Guin, the author of science fiction who prefigures our queer ideals, reminds us that we must bring imagination equal to the challenge of our revolutions ; without them we will not be able to part with our alienating, deadly habits. One of the first stepping stones of this activist fiction would be to replace the “linear” dramas of (male) heroes by “basket” carrier-bag writing, to wit, disordered choral “containers.”[2] The exciting world of parasites described by the journalist Ed Yong is an endless source for Malgat’s own stories. Yong describes one such story below :

“I’m a writer and fellow writers in the audience will know that we love stories. Parasites invite us to resist the allure of obvious stories. Their world is one of plot twists and unexpected explanations. Why, for example, does this caterpillar start violently thrashing about when another insect gets close to it and those white cocoons that it seems to be standing guard over. Is it maybe protecting its siblings? No. This caterpillar was attacked by a parasitic wasp, which laid eggs inside it. The young hatched and devoured the caterpillar live before bursting out of its body. See what I mean. Now, the caterpillar didn’t die. Some of the wasps seem to stay behind and controlled it into defending their siblings which are metamorphosing into adults within those cocoons. This caterpillar is a headbanging zombie bodyguard defending the offspring of the creature that killed it.”[3]

In this sense, then, the non-character of Agony is conjured up from a simple duplicated image by the food industry, lending it no psychology or identity whatsoever. This unheroic concept corresponds to both the theoretical wishes of an Ursula K. Le Guin “carrier bag” and the gothic-marvelous epiphanies of Yong. Agony represents a wandering figure, caught out by a spiraling narrative which is driven by sensations and feelings of domination,[4] as well as vitalist fragments as the materialist philosopher (and friend of Deleuze and Guattari) Rosi Braidotti defines them:

“The ethical ideal is to actualize the cognitive, affective, and sensorial means to cultivate one’s empowerment and to affirm one’s interconnections to others in their complexity. Spinoza’s lesson is crucial for Deleuze and Guattari’s ethical project. The selection of the affective forces that propel the process of becoming animal or minoritarian is regulated by an ethics of joy and affirmation that transform negative into positive passions. To be grasped, this process must be depsychologized. What is positive about positive passions is not a feel-good sentimentality but rather a rigorous composition of forces and relations that converge on the enhancement of one’s conatus or potential.[5]”

Like that cycle of metamorphoses initiated by the associations and divisions that characterize the egalitarian principle of our cellular lives – a principle that links us to many terrestrial and extraterrestrial forms, thus transcending the fact that we belong solely to humanity – Agony will be emptied of its substance, remaining like a warmly welcoming matrixlike envelope in which another character will hatch, namely the worm. Charlie Malgat’s SUGAR FREE exhibition at Les Bains Douches lies at the heart of the process of “Summenmutation” (“both visual and conceptual mutation”), practiced by the German artist John Bock. Here the surfaces, forms, and art objects are not enough. There everything converges toward the feeling of a strong dependency between the drawings, sculptures, and films, to better suggest a (Dirty) Story.

[4] Charlie Malgat reports that Agony is in the end a kind of soft doll and martyr in the tradition of the Surrealists Hans Bellmer, Pierre Molinier, and Clovis Trouille.