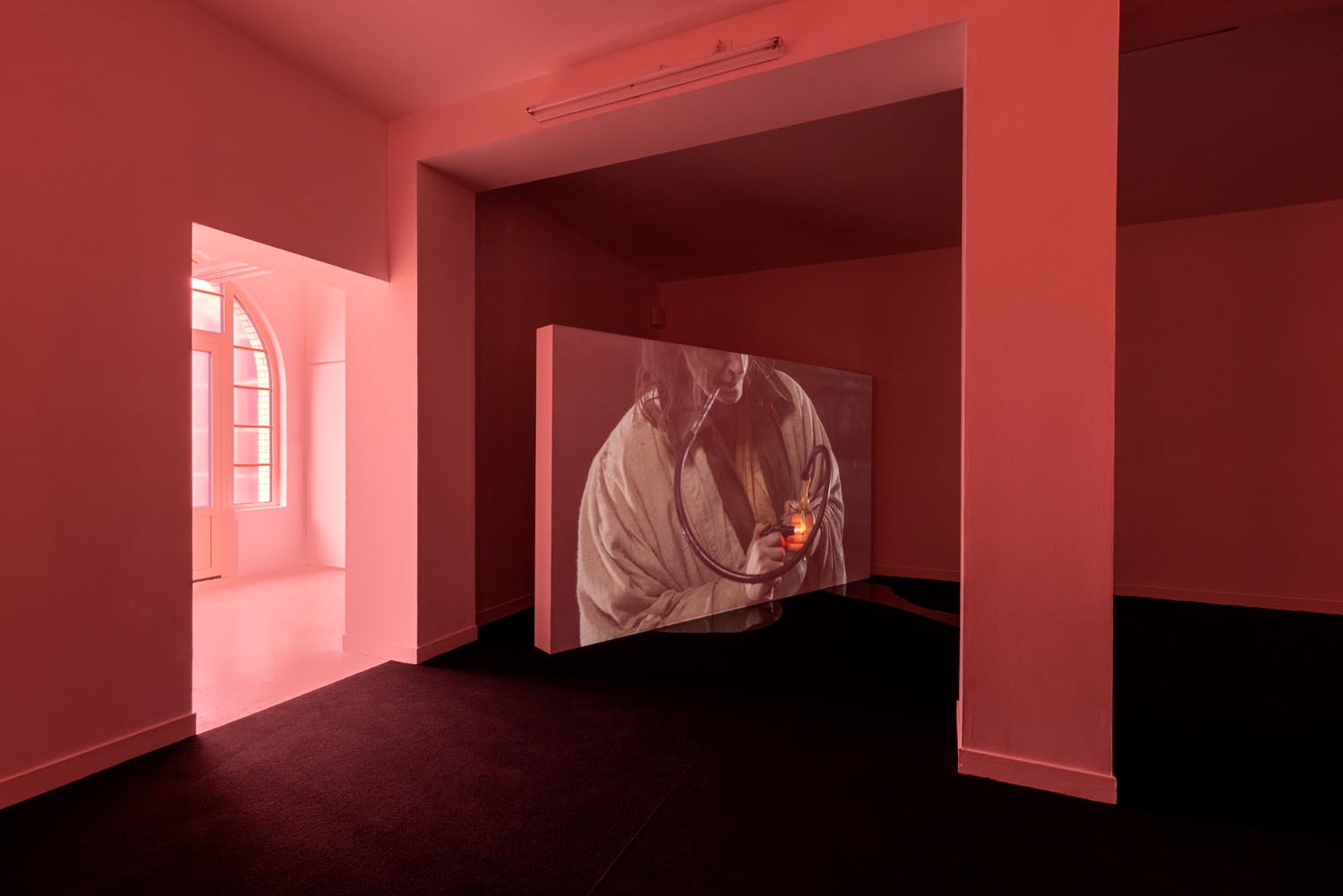 The Hierarchy of Lows

“Up is heavens, location of power, down is Foul,” says Mum, Laura Gozlan’s protagonist in the entering scene of Foulplay (2022), a video series that follows Mum’s so called encounters. If the power is located in heavens, what is placed in the foul? Dirt, stench, filth, loss, grief and eventually death? Or could it be a place for cleansing and resurrection? Can we look at grime as a powerful source of liberation? The foul transforming into a place of freedom and magic?

A vaulted underground (Cloaca Maxima) full with greyish water, shadows dancing on its murky walls, acts as a symbolic stage for Mum’s desires, and who inhales some kind of substance and regularly masturbates. Sometimes we hear ringing of an intrusive smartphone. Mum picks up and speaks to Byron (who is unknown to the viewer), in a whispering, seductive voice, at times demanding. She wears a peachy blouse, with well made long nails in smokey green colour. Her hair is greasy, messy. She might be middle aged. Her face looks old, tired, grim and greasy. Who is she? Perhaps Gozlan’s Mum is a mythological or archetypal character, living through a post-apocalyptic world – an imagery borrowed from the horror genre and sci-fi aesthetics that Gozlan likes to deploy. Mum might seem kind, speaking in an alluring, friendly voice, yet there’s something dubious and demanding in her at the same time.

Her rather grotesque appearance could be seen as a protest to the filtered beautified reality that we live through social media today. Yet, it’s hard to say whether she opposes anything, or rather, it could be an act of obeying – especially to ones own body and impulses. Masturbation, as Gozlan tries to indicate, is a migration from upper part (head, intelligence, knowledge or whatever you want to call it) to lower part. This is definitely a tool given back to women to liberate their pleasure, however not explicitly in a sexual context. The masturbation allows one to enter into a kind of magic. Magic of the body. A widespread view is that sexual energy provides the power behind magic. But here, it seems not exactly the point. Gozlan’s approach runs contrary to New Age Instagrammers who awaken their female powers (including sexual) by showing well groomed lifestyles, nor is it about modern self-made witches who run pagan rituals a la Burning Man *aesthetics. Instead, think of a magic that is complex and that derives from horror; the magic of healing, purifying – in the midst of waste. Perhaps Susan Greenwood’s coined term “otherworld” is of a relevance here. As Greenwood describes it: “A land of everything […]. It is a whisper away, it is a shift in consciousness to see the bigger picture and the threads that weave through everything that has ever existed. It is multidimensional, a heartbeat away” *. Gozlan’s work is inspired by the feminist author Starhawk, who since the 1970s has been strongly advocating for ecofeminism and anti-war activism. Interested in relationships between the physical and spiritual self, Starhawk draws attention to women connecting to the Earth and anything natural. In Gozlan’s work, as we see it, this could be very direct metaphor – a foul, cloaca, grime, dirt … the artist uses a reference to Cloacina, an ancient Roman goddess of filth, purification and cleansing, who presides over the sewers. Ancient gods can be very conflicting characters, and so is Mum. Like Baba Yaga, an ambiguous witch who accompanies death, as well as serving as a guardian of nature (Earth Goddess) and who could be even seen as a phallic mother.

Mum is sitting in a car pleasuring herself, and while reaching an orgasm she addresses Byron: “…are you asking me to alleviate the current social issue by means of Sex Magic”? That is followed by a deep, cynical laugh. Maybe it indicates – I’ve hoaxed you all along? She might be an ogre who devours their victims in a sexual sense, or she may be a queen of Cloacina (stemming from the Latin cloaca (drains, sewer) and cluo (to cleanse)). Either of these, as Gozlan points out, opens the arch of magic.

*Burning Man is a neo-pagan-inspired cultural event that has been gathering tens of thousands of people every year in the Nevada desert since 1986. [NdT]

*Magic, Witchcraft and the Otherworld: An Anthropology, Oxford/New York, Berg, 2000.