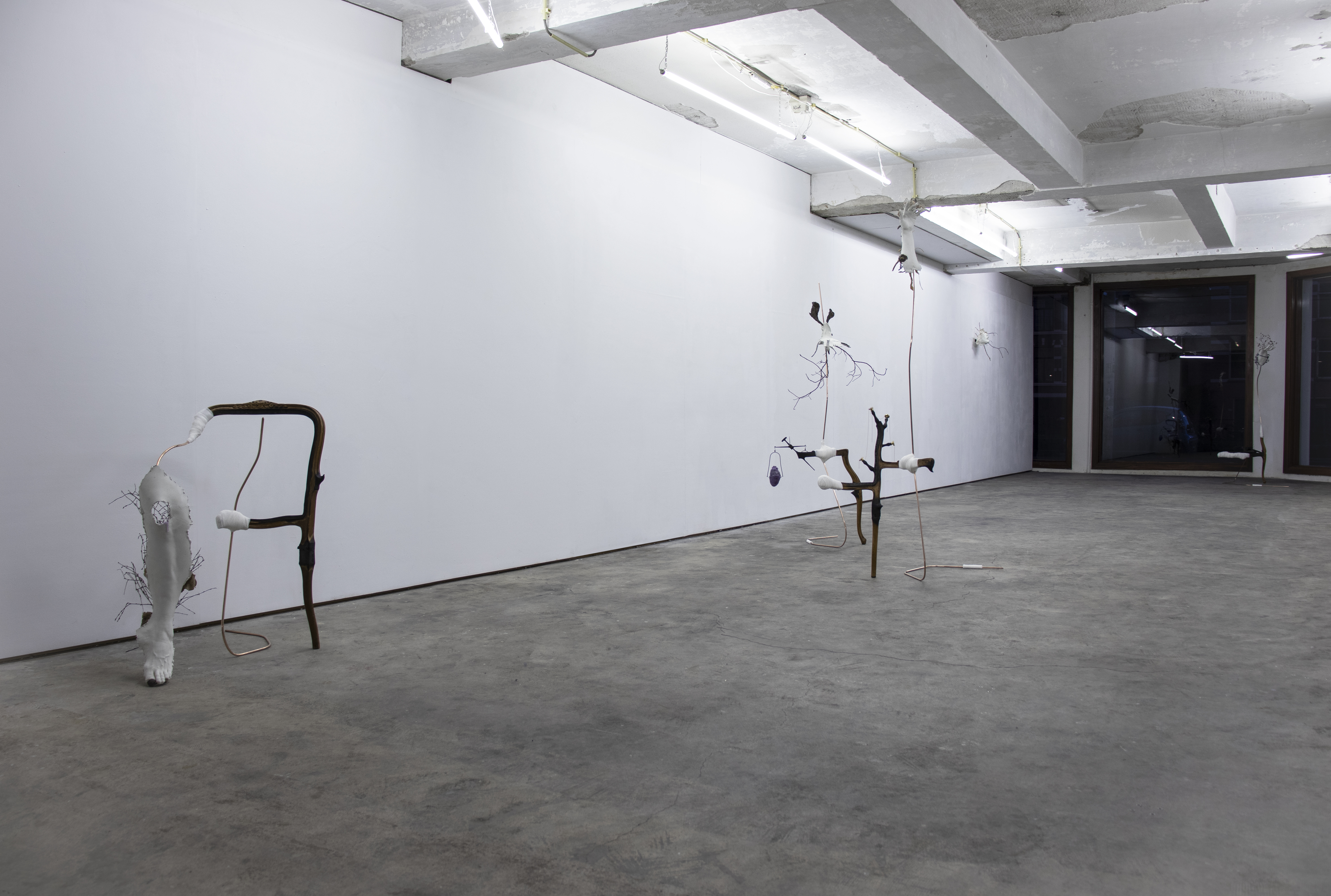 While on route to meet with Antonin Giroud Delorme and Mami Kang to discuss their collaborative show Nameless Healer: Threshold I listened to a radio programme on my phone. A poet was reading a recent piece and asked: What is the weight of a void?1 Outside the city was brimming with noise. Afterwards as I looked through my notes from the meeting I found a reference that I had jotted down years ago, several pages before: Spirit is matter reduced to an extreme thinness, o so thin!2

I rejoiced at both moments. Our conversation unfolded along similar images, in a way that makes those moments seem like temporary frames. Void and weight, matter so thin, lack of a centre, images that thin out without being exhausted are the words and fragments circled on my notes on this show. Within the installation, which is composed of Antonin’s sculptures and Mami’s choreography, I am drawn to the empty space that breathes among the objects and movements presented. Something as thin as the air that flows in-between Antonin and Mami’s collaboration and which envelops the space. Their individual practices seem to create against the perceived boundaries of bodies. They suggest continuous contamination
among things and diffuse their autonomy highlighting the agency of the surrounding space. I am intrigued by such invisible yet active landscape and I am challenged to linger in the tension. I imagine the text as a glossy liquid pouring over to further mark this place and filling in the overflowing gaps among bodies.

Mami’s slowed-down movements make that empty space vibrate. Antonin’s rich compositions – including techniques such as burning and casting, as well as materials ranging from dried-out leaves to medical bandages, plaster, chair legs and metal – are different manifestations of entities caught in moments of passage, shape-shifting. The word threshold in the title resonates with this sense of transmutation: objects are caught in the moment they are about to become something else, while their original function, still present, is fading away. Threshold is a term used in anthropology to indicate a liminal state, an ambiguous phase in-between when a person is undergoing a transition from a previous status to a new one but their position is not settled yet. The term describes rites of passage, such could be a coming of age. What I find compelling in the installation is how such concept becomes process and experiment in the artists’ work. A heightened awareness of transformative states is made sensorial, material, formal.

Antonin’s group of sculptures entitled Dwellers inhabits this potential. During our first exchange he described to me how the compositions are made to stand on a precarious balance, and how such balance needs to be performed again every time the sculptures are moved. The centre that holds the different weights together is constantly slightly shifting. The sculptures grow from the legs of two chairs that are in the style of Luis XV furniture. They include symbols of judicial and legal systems, for example the scale, which is modified to hold the reproduction of a heart that has a human scale. Observing how the materials are changed and merged together, how symbols are transformed, I think of images and meanings that disappear over a time. How this takes place across history in societies – for example the change of epochs inscribed in different furniture fashions – as well as on an individual level. Think of the memories of a grandparent that for a long time contribute to our understanding of the world, giving us a place in it. Think of their world as they knew it radically changing with technological and global developments. That reality that embraces ways of saying as well as types of social relations thins out and may eventually disappear once the grandparent leaves us. The childhood conversations at the dinner table get replaced by new topics.3 The sensation of changes through time and the conjuring of multiple points of view in transitions are supported by the casts of fragments of Mami’s body used in the sculptures. The collaboration between the two artists stretches beyond the time of the exhibition and it was good to notice that, while Mami’s choreography responds to the presence of the sculptures, the visitors
and the architecture of the space, the installation bears the imprint of reflections on bodies and movement beyond Mami’s choreography.

Getting closer to the body something of the tension between matter and void gets conveyed in Mami’s presence. When we met she expressed how for this work she saw her body as a cave and when I watched a rehearsal of the choreography I perceived what such hollowness may mean. But it’s a void that is not empty and as much as the body feels as if it’s been hollowed out another substance circulates in it, perhaps that spirit that is matter so so thin. Besides being an amplifier of the surrounding invisible landscape the choreographed movements send the body off into different directions, again there are
multiple centres that are constantly slightly shifting. Do the positions the performer takes visualise the body falling off course, at spiritual/material thresholds?

Returning to the empty space breathing among the objects and movements the image of a coastline comes to mind, where the land boundary keeps on mutating in the changing weather with the regular winds and waves sculpting it. Coastlines are dramatic places for the reason that a lot of energy is exchanged among the elements there and it is experienced. But exchanges of energy take place everywhere, all the time, and I return to that void that is not empty with this afterthought. It could be that the medical bandages enveloping limbs of the installation signal impact and bruised bodies, transmutations
and passages which can be painful when something experienced as fundamental is hit and thins out. Perhaps what a ‘nameless healer’ can be is the realisation of an active invisible landscape all around that keeps expanding.

1 The original question which I misremembered was ‘What’s the weight of a hole?’ From a poem by Joelle Tylor ‘Slide
21’ written for the BBC radio programme ‘What Kind of Times are These?’, The Verb, 28 January 2022, available here
https://www.bbc.co.uk/programmes/m0013t84.

3 Conversations at dinner tables, the passing of time and disappearing images are evoked by Annie Ernaux in her book
The Years, Fitzcarraldo Editions, 2018.