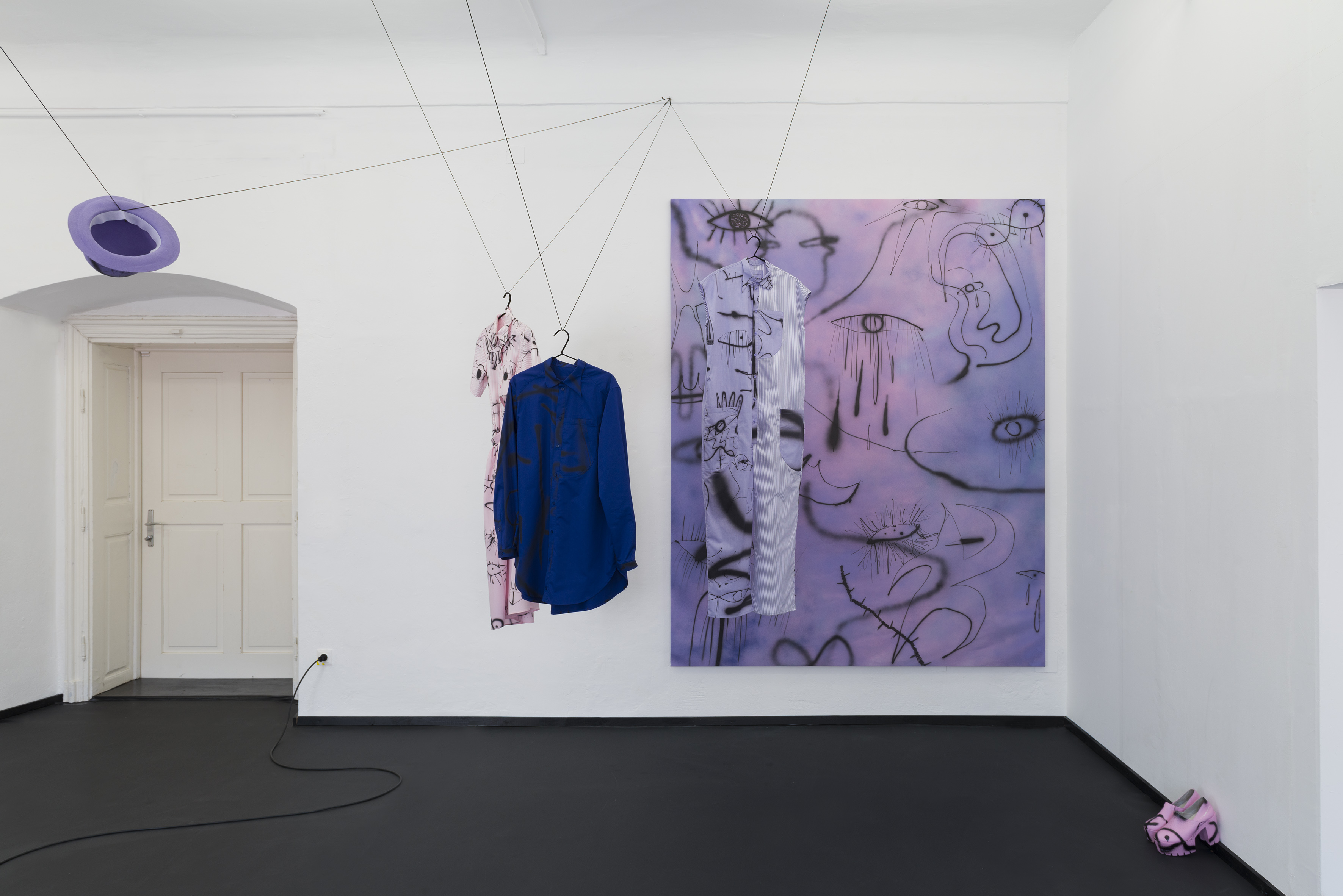 Through the work of contemporary Slovak, Czech and Austrian artists who intentionally chose to leave their artistic comfort zones in favour of more fluid and unpredictable methods, the exhibition searches for new approaches on the border between reality and fiction. Emerging from traditional drawing techniques, but expanding to incorporate objects, spatial installations, soft sculptures or writing, the artworks in the exhibition adopt surrealist methods and accept automatism, intuition, spontaneous recording of gesture and the outcome of chance as legitimate artistic strategies. The project deliberately moves away from rationality towards exploration of personal mythology and elements of fiction in the context of contemporary drawing.

Dreamers is a collaborative collection which brings together unisex designs for dresses and shirts by Hana Frišonsová and digitally printed airbrush artworks by Eva Maceková. Maceková’s artworks have an intuitive, scribbeling quality — they combine familiar, even archaic symbols with freehand gestures, achieving a punk aesthetic evocative of children’s drawings. In Hana Frišonsova’s clothing they are not used in a decorative sense, but rather are elevated onto a new level pushing borders of what, per definition, is called drawing. Intended to be draped over a body, the pieces imply a figure without a figure being explicitly present and hint at their underlying performativity. Presented as objects in the exhibition space, they are also fully functional and made to be worn. Dreamers proposes a kind of uniform for a fictional protagonist of the exhibition, an explorer of the subconscious.

The monumental drawing Smiley face by Pavla Malinová is a return to the artist’s earlier work, distinctive by its highly expressive quality. Malinová, who, at the moment, primarily works in the genre of figurative oil painting, has long been interested in combining formal experimentation with the intimate narrative of her artistic practice. Her seemingly heavy figures move away from painterly realism and naturally mutate into abstract-ornamental forms with a typical surrealist atmosphere. In her work in the exhibition, the figurative aspect is only briefly hinted at in the form of a flowing, stylised image of a human face. The emblematic emoticon, which has found its place in contemporary digital communication, is also a cultural symbol referring to nostalgia-soaked, smoke-filled raves. The blue-yellow faces writhing in a tangle of abstracted gestural motifs and transcripts of emotion transport us into a familiar environment, characteristic by its surrender of control.

Juraj Bartusz is an important figure of Slovak multimedia art, who appeared on the scene in the 1960s. His extensive artistic oeuvre referenced minimalism, concretism, or geometric abstraction. Bartusz dedicated a lot of his time to developing the principles of conceptual art and was interested in forms of action art and performance. The fact that he was one of the first Slovak artists to involve a computer in the making of his artwork speaks for the continuing relevance of his vision. Juraj Bartusz is also known for his sculptures inspired by cosmonautics and space. The exhibited piece is based on artistic experiments Bartusz has been cultivating since the 1980s. He was interested in a performative form of artistic work in which he experimented, for example, with throwing bricks into solidifying plaster or creating time-limited drawings and paintings. Exalted time-limited drawing in 14 seconds combines striking automatism with an original artistic vision that lays bare the visual beauty of the unrepeatable. Renunciation of control within a self-imposed time limitation and a vigorous, picturesque gesture form the historical basis of the whole exhibition, while fully sustaining Juraj Bartusz’s artistic position in dialogue with the exhibited contemporary artists.

Questions of artistic control and improvisation repeatedly come up in Daniel Hafner’s practice. While most of his work has an appearance of freehand drawing, he considers himself a media artist — and indeed, a closer look at his artistic methods reveals the illusionistic nature of his work, which is typical for media art. The three video works shown in the exhibition all explore the drawing’s potential to lead astray: either in the relation of a graphic gesture to time, in its spontaneity, or in its two-dimensional quality. When we see the performer spraying a thick, confident line on a historical building in St. Stefan, or scribbling on a wall with a tar-like substance in Anger, it seems like a transgressive act of an individual leaving his mark in defiance of the social code of conduct. However, the act never happened: the lines were added to the video in post production. The performer’s gesture and the line itself arose days apart from each other and took place in entirely different media. Watching the pencil line leave the surface and float in mid-air in Drawing on Marble, we realise that materiality is as much an illusion as is vandalism.

The artwork My home is also your home straddles the line between tapestry and soft sculpture. On the timeline of Konečná‘s artistic practice it marks a start of a phase when she began experimenting with textiles and creation of hand-made textile reliefs. Characteristic by their sculptural quality and strict definition via stitched lines, in Konečná’s recent work these reliefs depict primarily figurative scenes. However, this particular work dates back to a time when the artist explored the subject of home and her own living places. The textile piece, reminiscent of an abstract drawing, is the artist’s subjective perception of indoor space and rooms familiar to her from her past. The outlines of spaces melt into curves and soft forms and the viewer is invited to a haptic and intimate exploration of past timelines and memories. This abstract map drawn on a velvet background is finalised with a wooden frame — an independently crafted object, which, in contrast to the loose form of the embroidered relief, embeds the scene within a pre-defined system.

The sculptures of Edita Štrajtova and Barbora Volfova give an impression of lightness and fragility — in contradiction to the qualities typically associated with the materials of which they are made. Large steel constructions seem to be spun into existence rather than welded, or rather drawn inside the space itself, freehand. The focus on the space is not coincidental: for Štrajtova and Volfova it doesn’t only function as a background, but is also divided into narrative zones setting a stage for certain emotions and experiences. The installation Wake Up Slowly, Butterfly, from which the exhibited sculptures originate, deals with themes of hideout and safe space. Citing Kafka’s short story “The Burrow” as inspiration, the artists imagine the viewer as an introspective protagonist, an inhabitant of a sanctuary opposing the hostility of the world. At the same time, the hideout is flawed, acting as a cage as well as a shelter. The only option to exist is in the acceptance of vulnerability, in an intermediate state between the inside and the outside.

The work of visual artist and graphic designer Šimon Chovan stems from the interconnection of nature and new technologies, emerging against the backdrop of the philosophical theories of object-oriented ontology and speculative design. The series of wall-hanging objects Metabolic Intuition is the result of the application of several layers of material and technological processes. The strikingly cool aesthetic of polished steel is in contrast with the distinctively coloured volcanic earth, brought by the artist from his birthplace. The form of the exhibited objects combines rigorous control with absolute abandon, while the sharp and meticulously rendered edges of the seemingly abstract patterns are actually traces left by a bark beetle making them at once a by product and a strongly aestheticising element. Tablet-like sculptures communicate through shapes, symbols, colours, and material diversity while functioning as imaginary records for a spectrum of contemporary issues and emotions.

At first glance, the series of wall-hanging objects touchy-feely captivates the viewer with its playfulness. Lukas Thaler achieves this whimsical effect through gestural interventions, pastel colours, and experimentation with a wide range of materials. The artist’s expressive presence in the artworks is a matter of balancing his characteristic irony with a strong sense of form, divided into clearly formulated work series. Architecture-evoking objects, reminiscent of stylised portal shapes, communicate spontaneous but further unspecified intuitive records. The brevity and minimalism of the gestural hand drawing stimulates our imagination, encouraging us to interpret the shapes as possible fragments of bodies or writing. Whether it is through delicate finger touches or aggressive, gestural movements, Thaler chooses purposeful abandon of control in favour of inspiring visual automatism. His pieces materialise fragments of time and present the narrative potential of shapes played out against a backdrop of technological and material exploration.

David Pinkava is among the youngest generation of artists and is currently studying at the Academy of Fine Arts in Prague — however, within the exhibition he represents the most classical approach to drawing. For Pinkava, sketching with pencil on paper is a kind of intuitive search for narrative and form. Working without model or reference to a real object, he lets the subjects come to him freely: mythological beasts, distorted figures, beings of dreamlike interpretation. The artist’s preference for traditional drawing techniques gives his characters an uncanny allegorical quality, while their affinity to heraldry and contemporary cartoons makes it hard to place the motives within a clear historical time frame. Pinkava uses the sketches as preliminary studies for larger ink drawings, however, the exhibition focuses on the sketches themselves. Displayed in a vitrine and deliberately not arranged in a hierarchical order, loose pieces of paper overlay just as they would on an artist‘s desk, providing an insight into the creative process