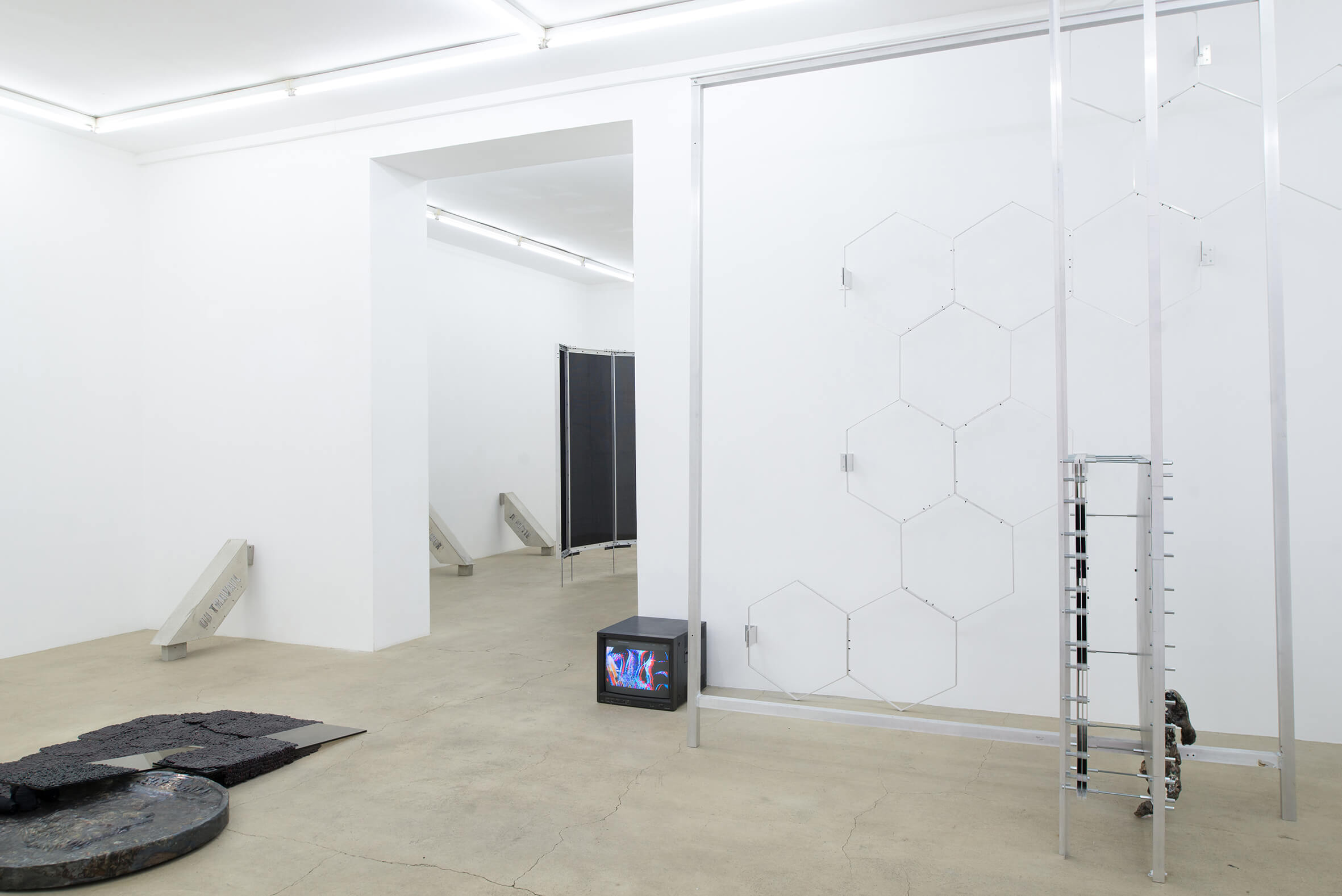 It’s started with the wish to curate exhibitions and work with artists. We never worked in any art gallery before, so we had to learn and discover the economical part of a gallery and what it means. However, we really began with exhibitions conceptions, although the first exhibition called « The End » that we held in the space was temporary.

When and why did you open Escougnou-Cetraro art gallery ?

We opened officially in 2014. As we were both doing our own job, we also had exhibition projects besides. We aimed to work with artists, putting words on projects and so on.

It started organically, we were hosting groups of friends at our place, outside of any art gallery system, such as one performance a month for example. At that time we didn’t figure it out it could be our job.

So we came up with the exhibition called « The End » based on Albert Camus’s novel Le Mythe de Sisyphe with the matter of life finitude. It was an open call and we received many applications but we kept three artists such as Muriel Leray (still represented by the gallery). Besides, we chose artists apart from applications. Along with the exhibition, we published a book with a lot of texts and we hosted a conference « Le commissariat dans la galerie » (« The curating and the gallery »). From this one, we met few people and we are still working with them such as Léa Bismuth and Alexandre Quoi. When it ended we wanted to have a proper space to host exhibitions and lectures as we did.

How do you chose artists as it occurs that each of them use various mediums through their approach ?

We think that multidisciplinary artists are part of our time. Artists experiment and those we represents don’t define themselves by the medium they use. They think about what they do, although the work for itself can’t be defined by its medium. Actually, the idea is to go out from the comfort zone. What arises our interest is the attitude of each artist, the connection to the image and the space. Image is developed in a relation to a space and stands for a consideration.

Pierre Clément would be defined as a sculptor but here we have what seems like canvas playing with the sculptural aspect of images. Anouk Kruithof extrapolates images which nearly become paintings. Aurélie Pétrel and Vincent Roumagnac use theater and photography to question the approach of it. That’s why artists we present can seem complex and we acknowledge it can take time to enter each universe. Eventually, it’s about getting into a medium as if it was another one.

Can you tell us more on the curatorial ambition you have, related to the image ?

We had few photography exhibitions but it appears we considered how photography is taking part into contemporary art. Moreover we had an interest for artists working with images, even though some of them also had a photography background besides. First it was photography, then video. That how our cycle exhibitions « Au delà de l’image » (« Beyond the image ») began as a collective exhibition and stood for the establishment of the gallery.

« Au delà de l’image » (« Beyond the image ») is a special exhibition partitioned into three chapters. What can you tell us about it ?

As the exhibition was divided into three parts, the first one was about photographic image and its variations. We exhibited Aurélie Pétrel, David De Beyter, Alexandre Maubert, Emmanuel Le Cerf, Pia Rondé, Jean-Baptiste Lenglet and Fabien Saleil.

The second one turned out to be about video images. We met with Laura Gonzlan and Rebecca Digne exhibited with Emmanuel Le Cerf, Pétrel and Roumagnac as a duet, David de Tscharner and Ludovic Sauvage. The matter was to have video image and sculptural works both coexisting. We wanted an immersive exhibition but also enable each piece to be visible.

The last one was a bit different. We aimed to include sculptures related to the space. We worked with Andrés Ramirez, Laura Porter, Romain Vicari, Gaia Fugazza and Haroon Mirza, Anouk Kruithof, Muriel Leray, Michal Jones McKean and Florian Sumi. We were looking to confront artists which are supposed to be sculptors while here it would relates to the image topic. It was different to work with artists that were not yet in the gallery, both with those that were.

Also, the gallery feeds an interest for research through various lectures and publications, would you give us more details about this wish ?

« Au delà de l’image » really established our identity as an on going reflexion about the image. Each time we had a lecture with artists and critics. It’s important for us to give a place for young critics, as a platform where they can meet each other. We curate exhibitions but it’s only the tip of the iceberg compare to what the gallery does. If you think about it, everything that happened in Au delà de l’image is happening throughout each solo show now. Each exhibition could be named « Au delà de l’image » (« Beyond the image »).

We can’t have a research platform, thus, there is something happening, as we gather archives from previous projects. It’s a way to think about confrontation as it takes place through out interviews for example. Moreover, it’s a way to communicate about what we do.

Do you have any curators, critics or inspiring people that you would like to mention ?

It would be all the people we work with. We started a thoughtful exchange with Léa Bismuth, Emmanuel Chiappone-Piriou, Alexandre Quoi and Alessandro Gallichio. We have a real connection with each of them as they are pretty different. What inspired us the most is the wish to learn and gain knowledge. Also, more than a school of thought we are really into artist’s attitude.

There isn’t any art without passion. Art is the event of passion and reflexion becoming visible through the artistic act. It’s a fight through each artists against himself, others, society, in order to find some kind of catharsis. This catharsis has to be foreseeable for those receiving this art. It’s the conversion of egocentricity into generosity, the transmission of an individual quest becoming universal.

Photographs and text courtesy of the artists and the gallery.