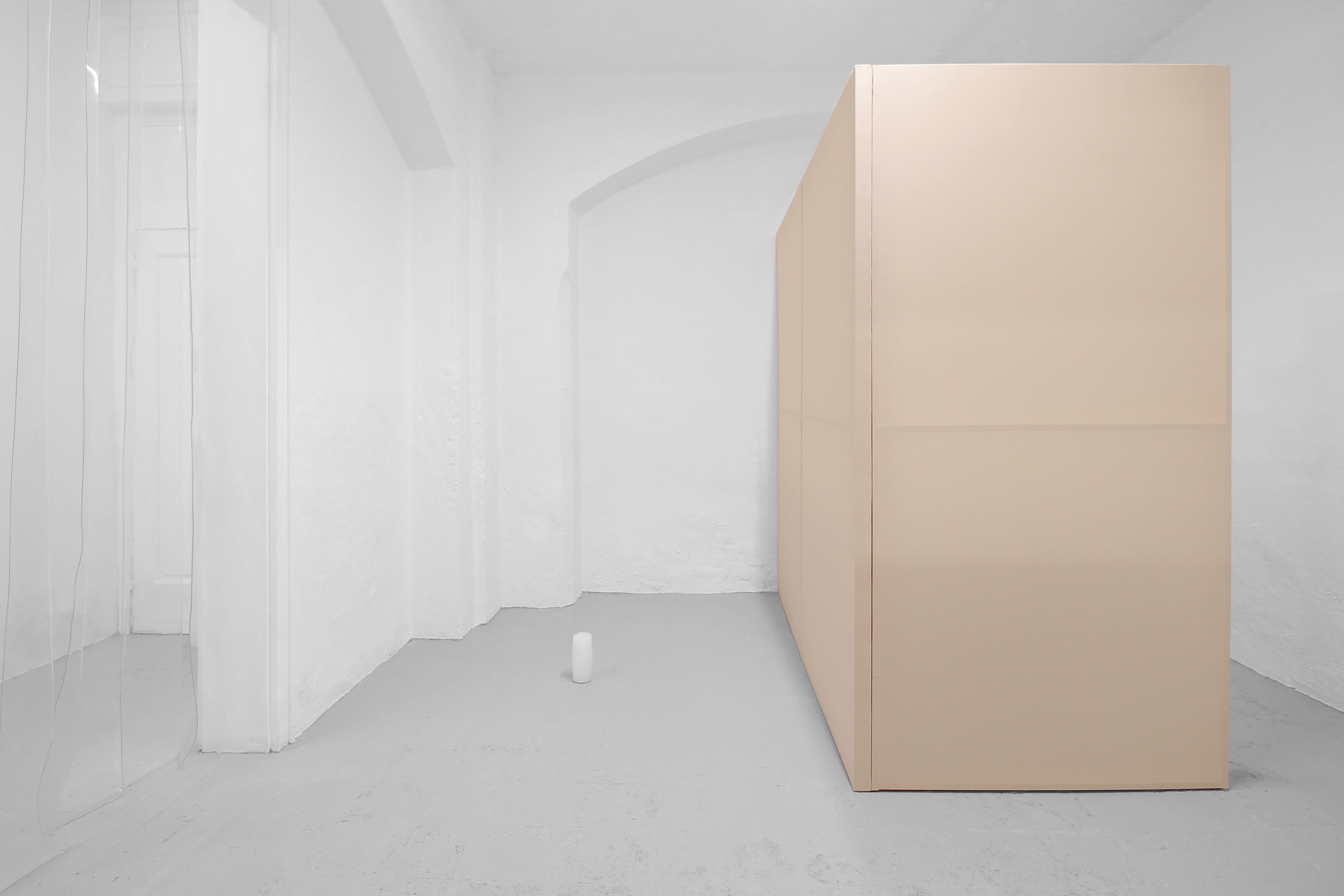 How did you approach art?

My father had a workshop and introduced me to watercolour and clay.  Later in high school I did modeling, figurative drawing and graffiti but it was when I studied applied arts that the field of possibilities became wider with design, styling and architecture. Afterwards, I studied at the Beaux-Arts. I wanted to be a designer and so I became an assistant designer. I learned a lot but it wasn’t exactly what I wanted to do, I still had an obvious artistic part in me.

Industrial design and in particular its standardised character seems to have an important role in your practice, can you tell us more about it?

At a very young age I was fascinated by how things were made. As I moved towards design, I realised that the field of forms in history was so rich that recreating forms was not a posture that interested me, I preferred to be more of an observer and try to make people look at things in a different way, which is more in line with an artistic approach.

Sometimes in design, objects are so standard, they are so familiar that they become absent. These shapes are born for specific functions and I like to question them again. The design relates to the body and the proportions and my work is very much connected to that, ultimately to observing us as human beings.

One of my earlier work is a photo with two hands trying to simulate the first human container and forming a bowl with a clay protrusion. It is a reference to a chapter by Claude Lévi-Strauss in The Savage Mind who writes about the birth of pottery, what it brought with it and the human proportions in connection with the first forms of design. It is like an extension of our body.

It’s interesting because in the shapes you produce there is a disembodied side that exists next to bodies whose presence is hollowed out.

Yes, that’s right. When I worked as a designer, each design had to fit into standards, therefore averages and an ideal norm according to geography. Design was almost pre-designated by standards and that’s a notion that interests me a lot.

Also, many of my works are born from existing objects or standards. In the publication Elements from their desk, this is a series of normographers that I drew based on 208 objects sent by 26 people. These objects all came from their workspaces, this book was for me a way of generating a potential alphabet of shapes, tools and thus creating a new standard of form, in reference to the work of Ernst Neufert or Le Corbusier with the Modulor, here I tried to create my own standards from existing objects whose choices I did not have control over.

This series was born out of a first series of works Untitled Portrait, 1,2 & 3 made at the Levy Delval gallery in 2018. These folded metal sculptures take up three dimensions of my body to create a structure hosting a series of culinary event objects.

Architecture is quite present in your work, both in the installations of your works in space, but also on a smaller scale with the micro-architectures of biscuits. What place does it occupy in your approach?

I really like to play with the notion of scale. I was particularly fascinated by the 1968 travelling Power of Ten by Charles and Ray Eames. It’s a zoom and unzoom from a series of photos, from power 10 to power 10, so from the scale of the hand to that of the body and the planet, then the opposite path, from the hand to the cells.

The first work I made from the change of scale was Ten Cookies Against the Wall, a series of speculoos enlarged 10 times. This action can be found in Claes Oldenburg’s work and I like to see the relationship to existing things change according to the scale that gives them a different visibility.

With the biscuits, there is the idea of a modular micro-architecture in the sense that I appropriate this industrial form in clay (Trophy of my absence). It’s a way of echoing the mannerisms that we have very young to mechanically assemble identical things.

Yes, it also gives a sense of accomplishment

And of balance, the work with the resin pringles has a perfect roundness that forms a keystone and gives an idea of satisfaction.

About these micro-architectures, their existence, and the shape you suggest in the space also derive from a feeling of boredom, can you tell us more about it?

The word boredom linked to this series of works came when I was in residence in Norway. I wasn’t really bored but I had a huge space and I quickly turned to be the artist alone in his studio who has to put things together to make shapes. The word boredom brought me to these games to overcome the boredom in the office and these are things that I had already put in place in my work.

It is also linked to the waiting and the expectations, especially for objects and waiting structures that are empty and ready to welcome.

In your last exhibitions you seem to be more and more interested in scenery and simulation, can you tell us more about it?

The question of the set and the fake is similar to that of theatre and cinema, except that in cinema we don’t necessarily have the technical framework. In exhibitions the spectator is not fooled because he can turn around the set.  It is a desire on my part to avoid magic, but rather to reveal a system and its mechanisms.

It is a displacement of forms and signs rather than the exposure of their lies.

Yes, all being close to ambiguous objects. The technique on the other hand is not easily recognizable even though I use exactly the same technique as the original design. For example, the false walls made of fabric that divide a space have a strong presence and yet it is the same technique used at fairs. Removing an element on an object is like magic but more technical.

It is also a process that I have adapted to the space. In 2018, at the ORR space (Brescia) for the exhibition A Lukewarm B, I made walls on my scale that can be modulated in space. It was more unconscious at the beginning but I wanted to recreate micro spaces in spaces without building picture rails but rather in relation to the decor and simulation and still with this idea of manipulation. It’s almost an in-situ work but not totally because it keeps a modularity in time.

The idea of protocol seems to be quite constant in your work, although it is more or less hidden depending on the work.

Yes, I have protocols in my work that are adaptable in the spaces where I exhibit. But I almost never make concrete use of the gallery space, the works are mostly independent from it. All the works with the biscuits and those with the walls are modular, for example.

The question of randomness through protocols is quite important to me. Sol Lewitt’s work made me understand that the modularity of the space was not completely managed by the artist. I moved away from the wall towards elements existing in space and the white cube. The work Can’t be shared is used with the elements of the exhibition space. It is two glasses in equilibrium that contain water. It has been repeated several times but in different ways depending on what is in the kitchen of the exhibition space. In my titles too,  the protocol is almost revealed. Unlike the conceptual artists of the sixties, I find it difficult to write a protocol that would give a value to the paper surface of it. This piece also speaks of our time with a certain economy of material, of what we have on hand and the economy of exhibition budgets.

Viewers are also sometimes invited to interact physically with the works you propose, to manipulate them. I am thinking in particular of the work To a social distance.

This work was produced a year before the pandemic. It’s linked to a book that struck me, Edward T.Hall’s The Hidden Dimension who invented the notion of proxemia, it’s the relationship we have as beings with others. It’s about different spaces: personal, intimate, social and public. There is a tension that we have as beings in an exhibition space or in a crowd. The bar was a game about it. An object known to the general public, usually outside large buildings, here moved into the context of the gallery. The piece was used in the same way, while offering the public the opportunity to touch it, as it was fed by a flow of warm water corresponding to the temperature on the surface of the skin. At this temperature, when our nervous zones are in contact with such texture, it becomes a reassuring presence.

There was a double discourse because we are in an exhibition area where you can’t touch anything and there it was creating surprises, it was particularly cold so people almost used it as a heater. At the end of the exhibition there was a design of fingerprints that mixed together. The idea was to talk about these surfaces that we share in everyday life without being aware of it.

The interaction that I am looking for with the public, I like it to be natural through functions that could be normal. In 2018 with the Cohérent gallery during an exhibition in Turin there was a system of chairs and tables that I had made available for resting and chatting, as well as USB plugs. It was almost a rest stand and I liked the ambiguity that doesn’t reveal at first glance that it’s an artistic installation that in this case was playing with the codes of the event.

There is also a kind of formal rigidity that is counterbalanced by a more comical aspect, is that something you particularly care about?

Yes, it is. I’m quite reassured in an exhibition when there’s a reading that everyone can understand. I like the tension between something funny and a dramatic dimension behind it. For example, with Trophy of my absence it’s the case, it’s a collection of chips but with something that makes you wonder. It’s fun to do and at the same time disastrous. The way I present them and their title translate something different behind it while remaining free of interpretation.

Can you tell us more about the publication and the importance it has for you?

The edition was born from meeting with Alexis Jacob and Théophile Calot in 2011 in Brussels, it is first of all a collaboration between friends. I like this idea of creating assemblages between different people around the same subject and of creating a group object that the edition and its invitations allow. I also like the way the book is distributed compared to the temporality of the exhibition. The publishing work brings another reading of the exhibition and generates an archive.