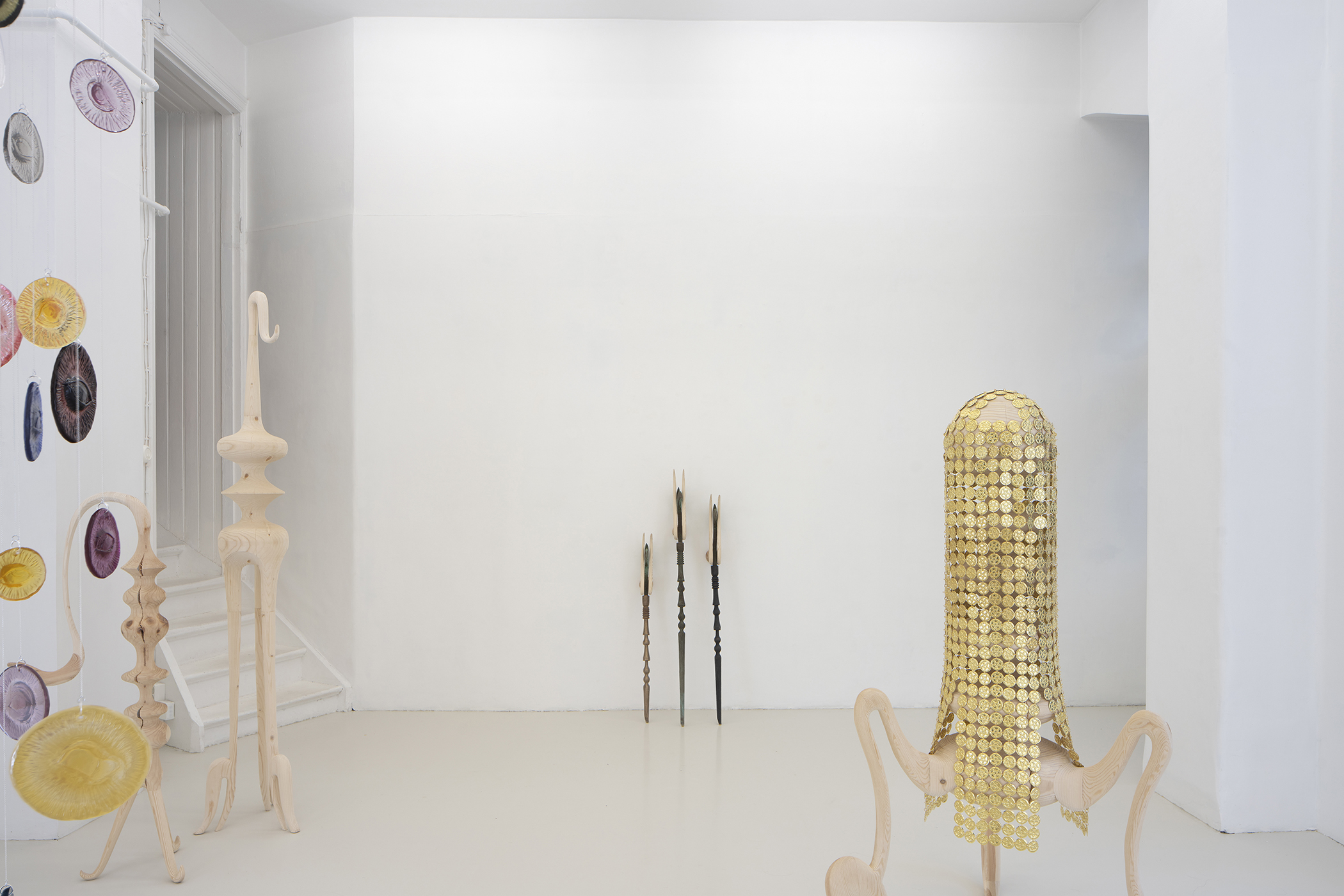 “The marvellous forms a system with the miraculous and the magical. The miraculous is reserved for God, and is manifested by a divine act defying the laws of nature. Magic, even if there remains a lawful form of white magic, is essentially a reprehensible form of witchcraft imputable either to the enemy of the human race, the devil, or to his henchmen, demons
and sorcerers. The marvellous, astonishing and incomprehensible, nevertheless belongs to the order of nature.”

The Swedish word Vapenhuset is impossible to properly translate, not because there are no fully correspondent words for it in English, but because in the Swedish language it has two parallel meanings which constitute, in their fusion, the essence of the word Emelie Sandström chose as title of this exhibition and that, metaphorically, might define the whole of her very art practice.

As first meaning, the dictionary would say that Vapenhuset corresponds to The Armoury and, as a room dedicated to the storage of weapons, this is, indeed, the idea at the core of the body of works presented in this exhibition. Weapons, in the form of blades, swords, chains and spears, shining or rusting, in metal or wood, are an archetypical element in Sandström’s production(2) and have a very special meaning for her. In their scary and dangerous appearance, these objects stem from a metaphorical and yet also very real need for protection, or better, defence. A defence from what? One could ask. The answer brings with it probably one of the most important keys to interpret the practice of the Swedish artist: a defence from herself and her own mind. Diagnosed with ADHD and living with the anxiety and obsessive-compulsive behaviours often involved with this condition, Emelie Sandström started to build weapons to protect herself from the terrible things she would believe could happen to her if these feelings and fears would not be listened to, in an extreme form of defence turned into art practice. On the other hand, Vapenhuset has, in Swedish, another meaning that is not as concisely translatable in English: it describes a specific part of Swedish Christian churches. Vapenhuset, then, designates a room on the left side of the church’s main nave which is considered to have been a place where, during Middle Ages, weapons were stored, either when visiting the church in the day to day life, or in extreme cases of threat and war. This specific place, where in Swedish iconography the Devil was often pictured as hiding, brings us into the other element crucial to understanding Sandström’s art: spirituality. Fascinated by the use of enchantment in religion and mysticism, and especially in how crafts, specific materials and art have traditionally and culturally been used to instigate fear as much as the miraculous in the believers and in the general populace, the Swedish artist has always integrated these elements in her own practice. The idea of the necessity of building sacred spaces as a physical manifestation of safe spaces, comes directly from a truly felt yearning for spirituality and the protection from the world it affords. It is within these two perspectives that Sandström uses and often chooses her materials, techniques and iconographies, as she tries to find peace and hold her fears at bay in the same way in which stained glass and gargoyles did for Medieval churchgoers. From this ongoing fascination, a whole universe of private iconographies and sacral objects has brewed in the years. Symbols, like the pentagram, are often estranged from their original meaning and acquire new significance in this private mythology.(3) The enchanting coloured glass of Christian churches becomes entwined with pagan symbols and takes the form of epoxy resin hanging pendants that irradiate a magical aura. The very techniques employed, like woodturning and polishing metal, are chosen in their ritualistic and repetitive nature in an artistic process where nothing is left to chance and every little detail
and action has a meaning and an almost spell-like formula connected to it.

It is within this complex and at times terrible landscape of fear, anxiety and pain that we should imagine the marvellous objects that Emelie Sandström creates. And there lies the real enchantment: in the way in which she is able to turn pain into beauty, fear into safety and invite the viewers to step into the Vapenhuset she created for them, to behold the shields, armours, talismans and weapons she uses everyday to fend off darkness. The room is transformed in a sacred place we are invited in, where a spiritual energy is strongly present and irradiates from these sinuous and shining objects and, eventually, a place where the Medieval marvellous, magical and miraculous, that Le Goff described as separate yet crucial natures, can meet, in a practice which is at once natural, magical and spiritual.

(1) Le Goff, Jacques, Héros et Merveilles du Moyen Âge [Heroes and Marvels of the Middle Ages], Paris, Seuil, coll. Histoire, 2008, p. 32. Our translation.
(2) In this aspect it is interesting to look at the documentation of one of Emelie Sandström’s first solo shows, 2015’s Hin, Galleri KHM, Malmö.
(3) A pentagram medallion has become a coat of mail in one of the sculptures in the show, the object was cast in hundreds of copies from a gift Sandström received from a friend, and used without any relation to its emotional value nor the symbology connected to it. Instead, it was replicated in order to avoid the terrible things that the artist feared would happen to her, if the original medallion would have ever been lost (in a by-the-book OCD behaviour). The sculpture is aptly entitled “Keep Me Safe,” 2022.

All pictures courtesy of Emelie Sandström and NEVVEN.
Photography by David Eng.