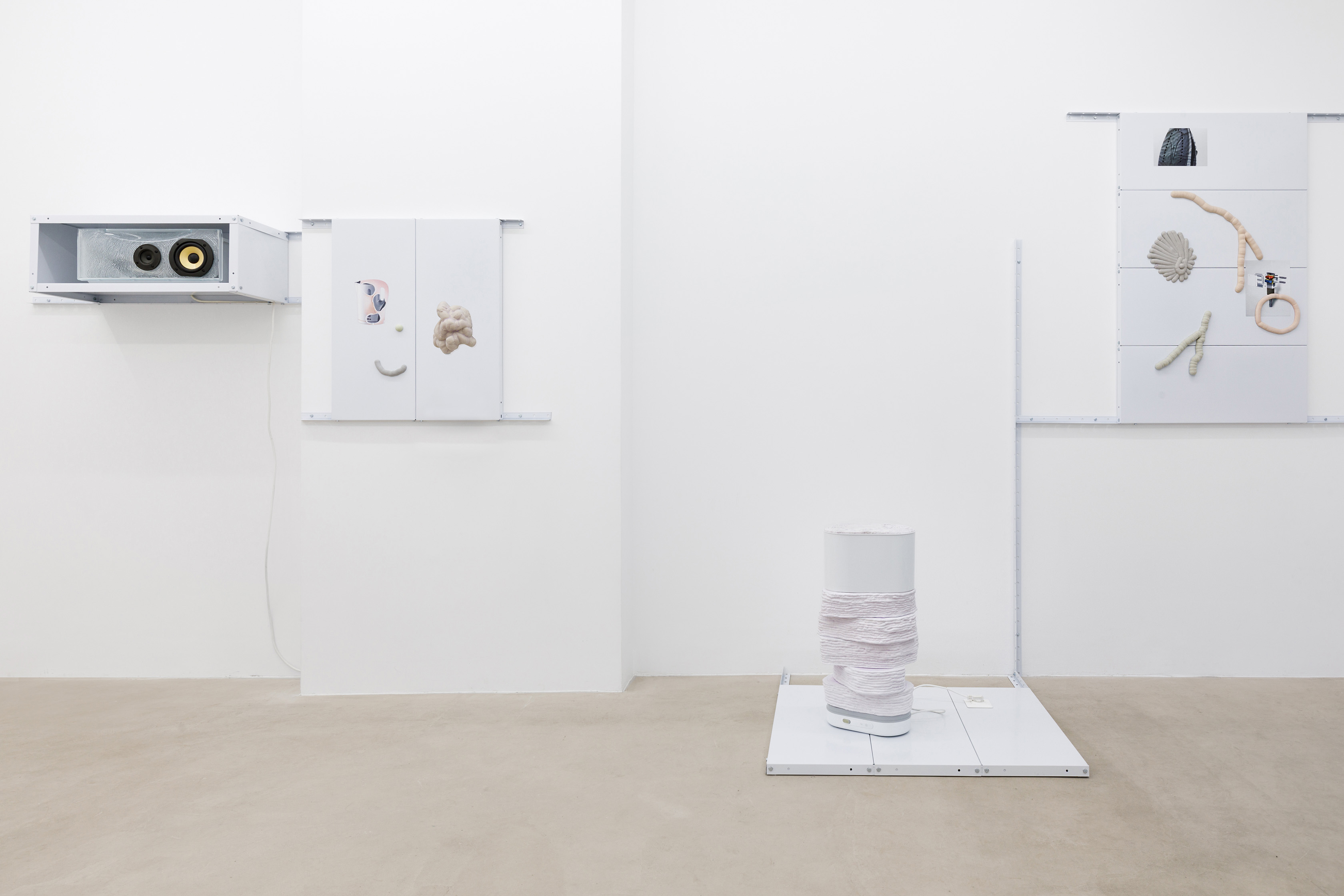 “Can they preserve us ?”

“And spare men they haven’t got either ?”

“Well, don’t we have spare things for everything ?”

Günther ANDERS, The Obsolescence of Man. On the Soul in the Epoch of the Second Industrial Revolution, 1956

In the forties, Günther Anders visited a friend suffering from an incurable illness in a Californian hospital, and recounted his last words. Spare man. The patient would have liked to duplicate himself, to be swapped with another man (but the same man) as we do with a lightbulb when it’s out of use. In his essay The Obsolescence of Man, the German philosopher questions our shame of being mortal – of not being machines. Polyurethane, plexiglas, polystyrene, resin, exemplify the many materials David de Tscharner combines to create unidentified objects. Nevertheless, like a perfume that stimulates the senses or a dish that excites your taste buds, the recipe remains elusive. The artist gleans objects of all kinds, brings together the Old and the New, causes mutations. The advent of machines and industrial artefacts in the sculptor’s universe creates tensions and generates new meanings. An encounter occurs. The thing takes on an animal-like, anthropomorphic aspect. Everything goes on as if de Tscharner has inverted Anders’ spare men into mortal machines, most definitely human. Chance is a necessary condition. The protocol is precise, rigorous, but the result is somehow accidental. Each part is removable, free, autonomous. The artist suggests, the artist invites. Nothing is frozen, the work recreates, reinvents, recomposes itself at any time. Falling somewhere between Cronenberg’s Crashand the Beatles’ Tomorrow Never Knows, the sculptures are combinatories, samples that interlock and overlap, LEGO games. The artist plays with the visitor as he plays with the materials, shapes and colours. But is it truly a game? Is it a coffee machine or the memory of a coffee machine, an organ, an animal, god knows… Is it a species that retains its features but no longer meets its functions? De Tscharner misleads, covers his tracks. His sculptures are the fossils of a bygone era when tools were still used, functional. From now on, the tool is dead. Only remains the field, after the battle.Elton Chile Freezing Canopée. Plastic-words, flesh-words, resin-words. Using 400 words collected from bathrooms, interior design and household appliances catalogues, the artist creates an Oulipian1 code, a database using industrial and commercial language only. Hijacked, these data give birth to a sound piece programmed to generate up to one hundred million haikus. The discontinuous and random mode of broadcasting leaves blanks that contribute to the work’s ghostly nature, its fragility, its humanity.Is it a dream? By showing us domestic objects and mutating by-products, the artist creates a post-apocalyptic universe, simultaneously close and distant, made of the everyday life and the uncanny. Although the objects were originally unidentified, their shapes become recognisable through these things’ remains. Everything is set up to let life penetrate and embody the object.