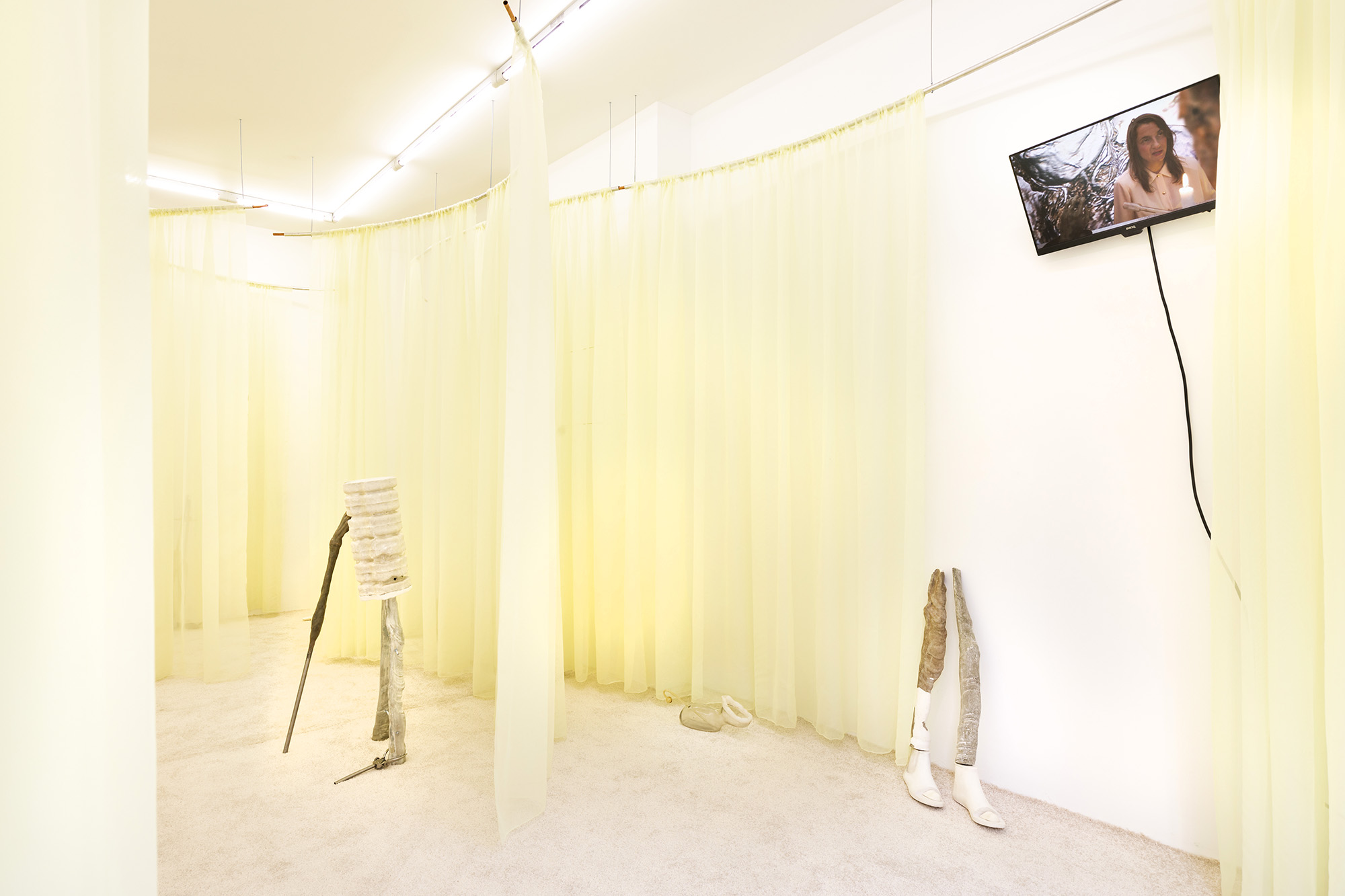 A dichotomy is often presented between film and video (although we do not really know the difference between the two). However, other split lines in the moving image production do exist, one of them holding in their origins: the line that separates what is captured from what is found. On one hand one shows, following their own logic, images mainly of a heterogenic nature, and made by others. On the other hand, one films things that really happened, whether staged or live captured (and of course, the limit between the two is always somewhat blurred).

Regarding her video productions, Laura Gozlan mostly worked over the past few years from what is found, using her favourite materials, gialli films (Italian romantic-horror-crime film noirs), science-fiction fantasy and documents found in scientific archives. She also produced pieces in synthetic images (The pattern of abandonment, 2018). But for this new exhibition, she re-engages with a practice she had long deserted, and appears both behind and in front of the video camera.

In a series of three short videos, she impersonates a rather strange female character, whose features send a scrambled message, as her fluid blouse and nude pencil skirt suggest an air of bourgeoisie, that her messy hair and dull-looking face meticulously deconstruct. On another note, this woman that the artist describes as androgynous, performs a series of actions that seem to obey a ritual logic (smoking organs, getting bones out of a basin…).This echoes a few obsessions that haunt the artist’s work: zombies, ghosts, dismemberment, and mummies. MUM pls (2018) thus begins with the image of a change.org webpage calling for people to –brrrrr– drink «as a carbonated beverage» the red juice stagnating in a giant granite sarcophagus rediscovered last summer in Egypt (a petition remarkably signed by 35 000 people). This semi-life imagery is considerably anchored in the field of cinematic production, from Tourneur to Romero, and through Stephanie Meyers’ successful books adaptations, or Hammer Film Production movies. It can moreover be interpreted as a discourse on film being used as a medium in the light of the Frankenstein myth, the video editing software replacing the dissection table in the creation of animated objects.

The exhibition’s title and the artist’s body of work however send us on another lead, towards a gaze that looks into our technologic environment (which is also the case for the pieces that are not as much technology-assisted, such as are her sculptures). We can understand this semi-life as an intermediate state between matter and information in an immaterial era, a new type of flesh, to quote the title of one of her recent exhibitions (Hail to the New Flesh, 2018), and the promises of eternal youth it offers, once existence is set free from all submission to biology. The tech world is incidentally full of very wealthy eccentrics who believe they will succeed in abolishing death. This is how Ray Kurzweill, the transhumanism pontiff, published in 1993 a diet treaty to prevent all risks of cancer: The 10% Solution for a Healthy Life.

However, facing this brutal truth that is the universality of death, all the apps in the world are for now of no help. After a decade of enthusiasm for detox diets that do not feed, extreme photoshop makeovers, continuous flow of make up tutorials on Youtube, we seem to suddenly remember that we have a body, that this body ages, and is even mortal. Moreover, the youth enhancement systems for super-billionaires that the artist knows everything about (child blood transfusion, cryopreservation, e-soul download in a new body) are probably not worth a good layer of foundation, a mummy juice milkshake, or a forgotten ancestral rite.

In her works, and in the organic systems that constitute her exhibitions, where the shapes move from the screen to the physical space, Laura Gozlan shows that these new rituals to ward off death are far from futuristic and encompassed in a long timeframe. The first anatomy treaties, magic rites and religious practices mingle with advertising, photoshop filters, IT and nanotechnologies. The convergence between technology and biology that we witness in a baffling manner, started long ago.

Let us conclude by highlighting that if the artist abandoned Italian B movies for some time, this new exhibition cheerfully practices the art of register change dear to the heart of Argento or Fulci, the gialli kings. We have social drama (why on earth is this posh woman falling into decay?), horror (oh my god, corpses!), intrigue (but who do these organs belong to?). As for the accented facial expressions, the character’s outrageous make up, and the objects she handles, of which a memorable urinal for women turned into a waterpipe (!), they at times confer to the whole an undeniable comical dimension.

Philtre and Filter, by Jill Gasparina