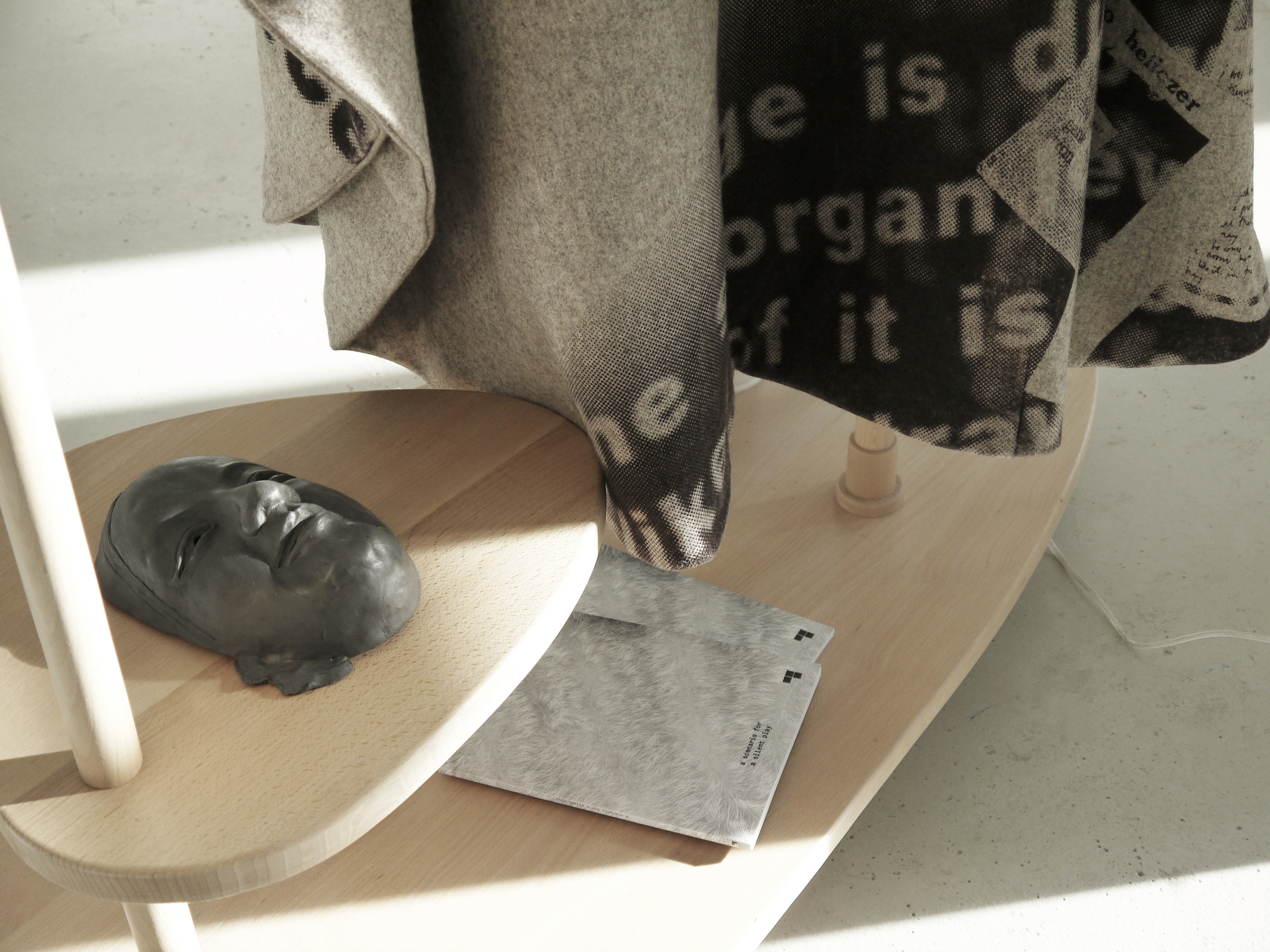 A scenario for a silent play

I start with the accessories. They are the heroes of this book… Accessories thus play the main role, the characters inhabit them for a moment then disappear, only to (for some) reappear later… Certain words or expressions also play the role of the hero which men use for an instant – zeros, that empty figure that is filled and re-emptied right away. Lay down from the start the main accessories that will predominate, viz., a voice, an outfit, an upper- class hotel, a film, a silhouette picturing a bust, head back, laughing, the face, fleeting and obsessive like a ghost of Lenin, etc. In the end, once again, all of that remains empty, a series of words.

As in this passage from a novel by Jean-Jacques Schuhl, picture a setting in which it would fall to the accessories to convey the narrative. “I start with the accessories. Those are the heroes of [this show].” They’d come alive for a split second, driven by the observer, who would bestow on these signs plausible identities, backgrounds, and plots. Before vanishing into thin air, inarticulate, pending renewed projections.

The place: backstage of a performance venue, filled with silhouettes and words.
The time: it’s night and day, no choosing, the ambient light varies, changes from bright yellow hues [the day is bright as urine] to reddish pink and make-up rouge [there is blushing despite the dark].
The characters: a length of printed fabric, costumes, a wig, a coat rack, an ancient symbol, masks upon masks upon masks. Their expressions and genres are unclear.

Around a year and half ago the director of Les Bains-Douches Sophie Vinet invited me as part of a residency to take a fresh look at the collection of texts, reviews, posters, ephemera and correspondence that she has been building up since 2011 around Piero Heliczer. Publisher, poet, filmmaker, actor, child star in Mussolini’s Italy, and founder of the Paris Filmmakers Cooperative, Heliczer is heir to the writers of the Beat Generation. Even though he stood at the crossroads of the history of poetry and film as well as underground culture, he continues to be a marginal figure, a meteorite, appearing glancingly for the most part in biographies and works devoted to others (Warhol, the Velvet Underground, Gerard Malanga, etc.).

Les Bains Douches has a wealth of documentation regarding Heliczer that boasts numerous remarkable names, each representing a career more singular than the last, Angus MacLise, Gregory Corso, Jack Smith, etc., and before such a plethora of material I found it difficult to follow only one thread. During the months of research, however, I did trace a few and was especially interested in the stage plays that Heliczer wrote. They are indeed rare, brought together in three collections published in 1971, each of which is particularized by the color of its flyleaf, be it blue, green, or yellow. The present show draws its inspiration then from these plays as much as it does from the figures, motifs, and obsessions that fill his poems, films, and collages.

To echo the movements that are at work in Heliczer’s writing, the doublings, disguises, and successive incarnations of one and the same identity through multiple bodies – whether organic or not – several authors were invited to haunt the exhibition with their voices and dress with their words the accessories, the silent heroes of this show.

isoud opens back curtains preparing to leave the stage darkens instantly the puppet tent is silhouetted in a manner that one can see the lifeless dummies hanging inside the frame henry james wearing a ghost mask dances a wild and tense dance called the dance from the tomb into the grave at the end of it he stops suddenly and throws his mask at the puppet stage
Piero Heliczer, The Plays of Piero Heliczer, vol. 1: The Tomb of Henry James, 1971