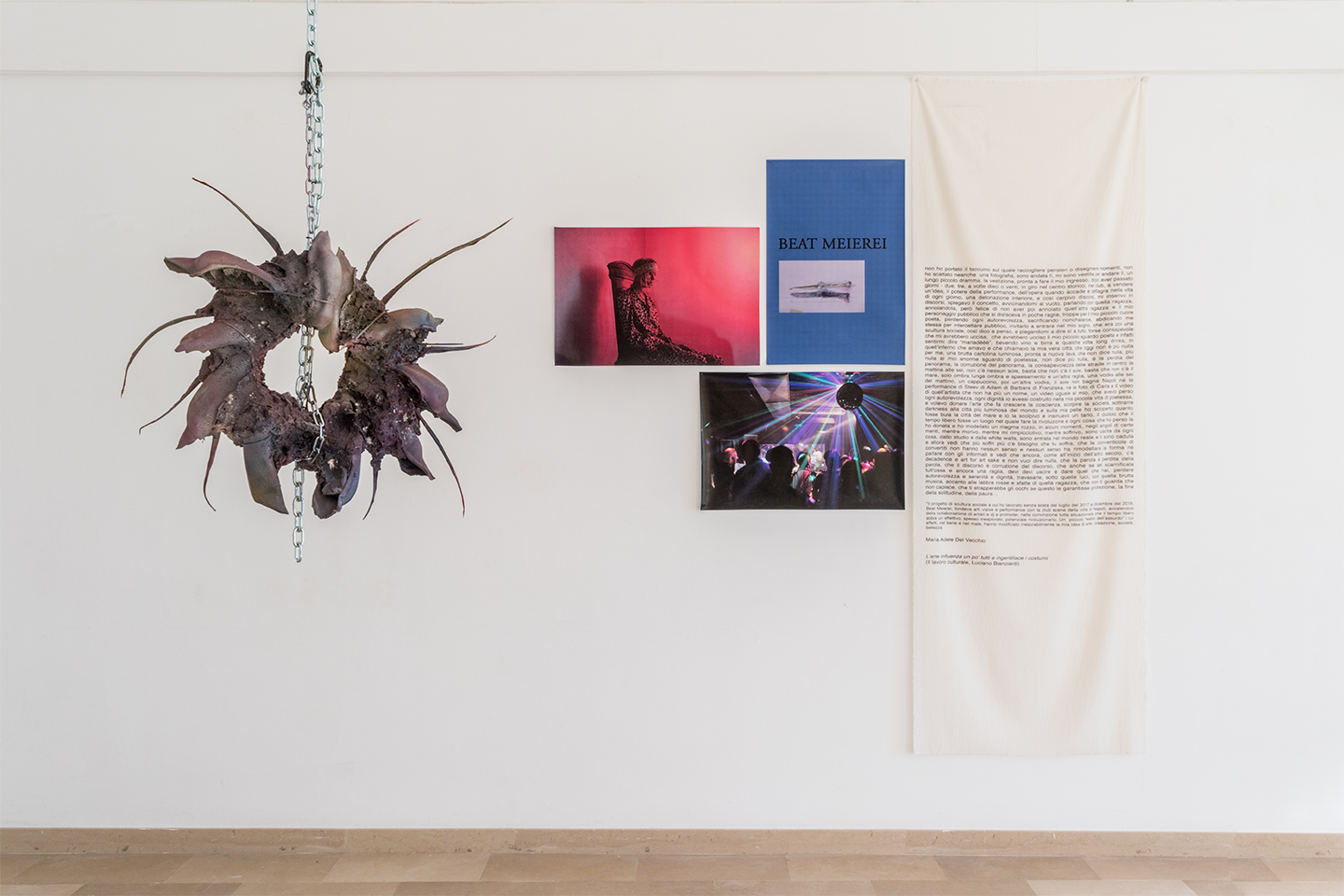 “I’ll slip an extra shrimp on the barbie for you”

Organized by Like a Little Disaster and Pane Project

A bait ball occurs when small organisms (fish, birds, insects) move tightly packed in a spherical formation around a common center. It is a defensive measure adopted to escape the threat of predators, but it is also a cohesion exercise enhancing the hydro-aerodynamic functions.

A coordinated bait ball that moves and glitters in unison is a mesmerizing image; hundreds or thousands of individuals moving together under radio control or a pre-established choreography. They are even more surprising considering that there is no leader or hierarchy within them.

The “balls” are formed through that spontaneous emergency known as self-organization. It emerges from the bottom upwards, it is an a-centered and non-linear phenomenon, it is an irreversible process, which thanks to the cooperative action of subsystems lead to more complex structures in the global system.

A bait ball rotates, contracts, expands, separates and returns all one, without interruption – single individualities with a hive mind. Cohesion is achieved through the coordination of each individual with respect to the nearest neighbour. A massive coordinated “ball” is made up of thousands of individual actions that make up a single collective movement.

Heterogeneous, “aggregated” patterns in the spatial distributions of individuals are almost universal across living organisms, from bacteria to higher vertebrates. Whereas specific features of aggregations are often visually striking to human eyes, a heuristic analysis based on human vision is usually not sufficient to answer fundamental questions about how and why organisms aggregate and nor about how and why the same associative processes invest “inanimate” elements such as water vapour, sand dunes, galaxies, in which these patterns derive from simple abiotic interactions between the individual components.

The project BAITBALL follows the same natural, mutualistic and universal mechanism to create a hybrid subject/object, a collective dimension; what remains after eliminating the artificial notions of nature and culture. It emerges from the continuous articulation of humans and non-humans, artifacts, inscriptions, animals, plants, spirits, ancestors, gods, organisms and technological prostheses, local and universal, apocalyptic fears and technological hopes.

“us and our technologies in one vast system – to include human and nonhuman agency and understanding, knowing and unknowing, within the same agential soup”.

BAITBAL is neither an object nor a subject, it is a relationship. It is a phenomenon that can only be represented as an interaction, thus allowing to pass from the obtuseness of “I” to the fluidity of “Us”. It is not a fixed point, an invariant structure, but a circulation being that draws a multi-centric network. It is an interlaced tangle that constantly acts with all the other animated and inanimate makers of the world. Within it, human and non-human associations become cognitive paths of the world because they generate it with their mutual action, hic et nunc.

BAITBAL is a toroid, in it the energy flows from one end, circulates around the center and comes out from the other side. It is balanced, self-regulating, can sustain itself and is made of the same substance surrounding it, like a tornado, a ring of smoke in the air or a vortex in the water. The toroid allows a vortex of energy to flow outwards and then return to the vortex. Thus the energy of a BAITBALL is continually regenerated and at the same time expands self-reflecting on itself.

BAITBALL is not a macro-organism, nor a subsumption of the parts in a superior totality, but an inter-penetration of the entities, a zone of indistinction and transformation.

BAITBALL creates lines of growth and movement, it does not live in places but along paths: the “wayfarer” is its original condition. Its dimension is defined based on movement and relationships, its contours are so blurred that its definition becomes possible only from a contextual ecological point of view. Its environment is not simply the “thing” that surrounds it, but rather an inextricable “imbroglio” of lines, a tangle of interlaced paths.

This tangle is the texture of the BAITBALL, beings do not simply occupy the world, they inhabit it, and in so doing – in threading their own paths through the meshwork – they contribute to its ever-evolving weave. Thus we must cease regarding the world as an inert substratum.

If the modern, colonial, naturalist power/knowledge tends to contract the collective’s action in an orderly system (a structure, a chessboard, a cartography), BAITBALL instead extends the perception of reality in a multiverse made of traces, textures and weaves – from the projection of luminous imaginary chains between one star and the other, to the construction of magic seals, to chiroscopy, or to other forms of mantic. This process amplifies the original intertwining of organisms, mythologies, and ecological relationships.

BAITBALL is a place where to live together across difference. Whatever the new arrangements will bring, human exceptionalism and individualism will very likely be a difficult embarrassment for dreaming up new worlds to become-with-others.

The ecosystem that emerges from the perspective of the BAITBALL implies a reconsideration of the Darwinian theory of evolution: instead of considering separate classes as individuals, kingdoms, species, biomes, it is necessary to consider the single entities as vortices in a flow. These entities, in fact, do not exist as stable objects, but continuously mix in an unstoppable confluence of flows. BAITBALL describes a position of translation, mediation and relation that becomes the pivot of a morphological and ontogenetic model.

“The view of evolution as a chronic bloody competition among individuals and species, a popular distortion of Darwin’s notion of “survival of the fittest,” dissolves before a new view of continual cooperation, strong interaction, and mutual dependence among life forms. Life did not take over the globe by combat, but by networkiing. Life forms multiplied and complexified by co-opting others, not just by killing them.”

BAITBALL is activated with what we cannot see or foresee with the unexpected, invisible, invisible consequences of collective actions, beyond the limits of the standardization of the possibility of control.

BAITBALL Identity is not an object; it is a process with addresses for different directions and so it can be fixed with a single number. BAITBALL is more like a verb. It repairs, maintains, re-creates, and outdoes itself.

BAITBALL is an evolutionary stage, a strategic mechanism to circumvent extinction, to lie to death.