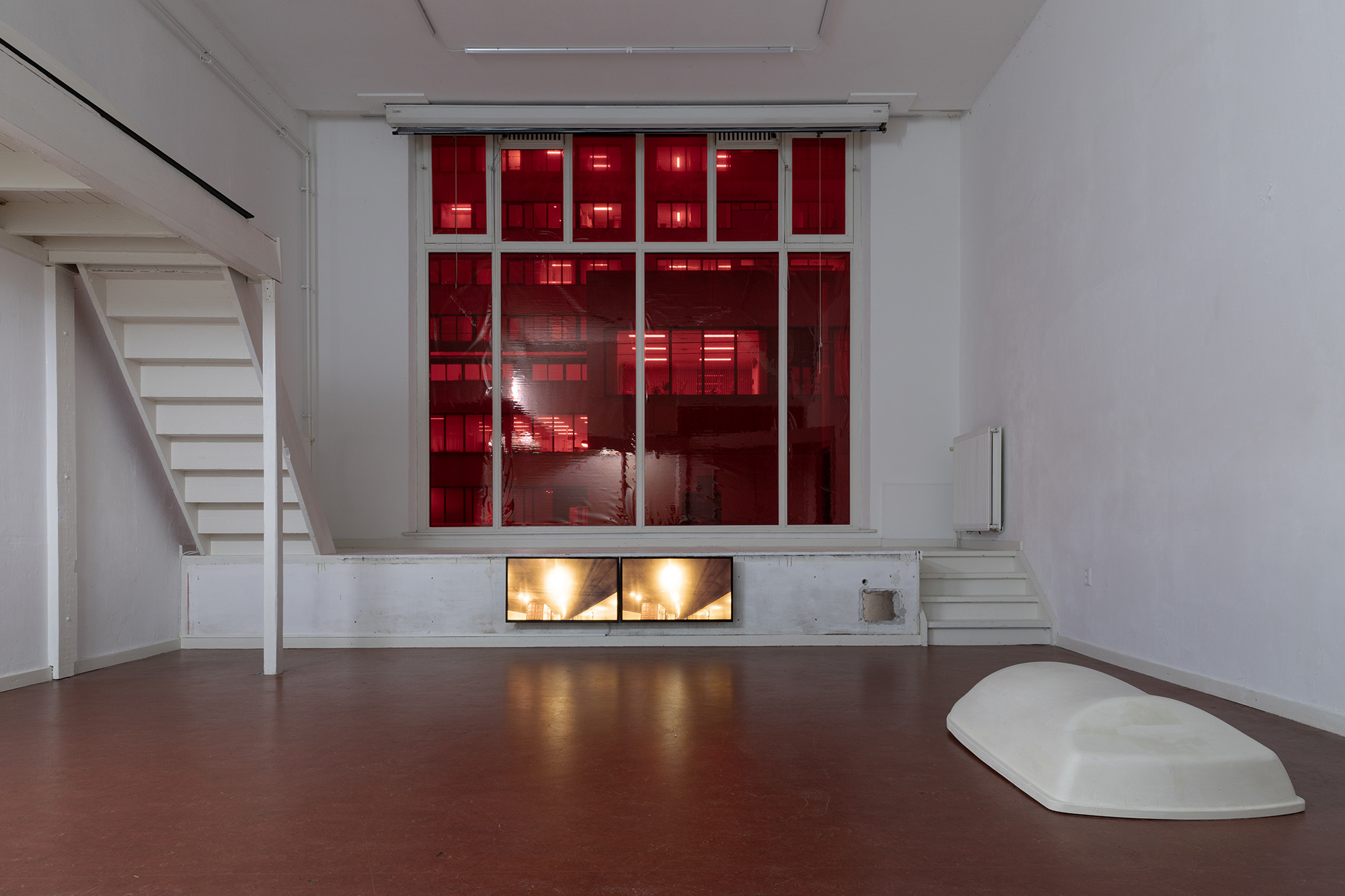 “When you turn on the faucet and water does not flow, the entire water sys- tem leaps into the cognitive field.”1

For decades Google has been training bots to “see.” Within an image, ai is being tested to classify “tree,” “stop sign”, “car”, “dog”, “child”, largely to decide what is the best option for a self driving car to hit in an inevitable accident. The response to these programmed disasters is arrived at through the infinity calculated in its simulations, realized in an inhuman speed. The social relations produced by our technologies of motion and production, our infrastructures, are in turn producing further technologies. Computed realism becomes an impulse as a million possibilities are deducted to one in a fraction of a second. A similar compression in me says “jump” the instant that I know I cannot; sees the whole nation underwater (again) while driving over its largest dike.

Spatial awareness is central to Come Hell or High Water, yet it involves so many structures that are meant to be used or followed rather than perceived. These works are drawn from the periphery of utility, placed into focus through their dismemberment. The artists trace this periphery through strolls across the edges and centers of urban spaces. Quality time spent on manufactured concrete routes, their approach is personal and reactionary as opposed to planned. Guided by curbs and levies, they craft an intimacy in these artificial stones.

Surely, walking through a cute European town, you’ve noted the difference in brick work from that of your home. The specificity of our spatial con- tours, the dialects of detail in our fundamental constructions form these cultural shimmers. So we bring with us the accents of our transit systems, our screw threads, the water level of our toilets. Those are our companions in Hell or High Water. As the exhibition presents nearly familiar components of motion and restraint, it inflicts upon us our own peripheral knowledge by dismantling it.

Immediately upon entering Mutter, you encounter the mezzanine, an archi- tectural highlight of the gallery. Suddenly, it bears a large, shoulder high con- crete barrier. The structure is poured onto and around the wooden ledge, clamping onto it. Displaced specifically into the mezzanine, the barrier rep- resents its prevention, what it holds back. Carrying the option it forbids, its construction alters my memory. I think of the times I have climbed up the stairs to the naked edge, hand urging to grab a banister it knows is not there. Striding with an adrenaline of risk and confidence. The sudden presence of this concrete edge makes me think “How have I not fallen from the edge before?” It joins a family of curbs: dikes, dams, sluices, constructed to bridle natural liquid flows. The withdrawn space before and against it is riddled with sublime potential. This insertion bears the violence of what it protects you from, embossing memories of its previous absence with warnings and alerts.

Surfacing on each floor of the exhibition space carriers, severed at dif- ferent joints. The front halves of two lithe row boats erupt from the base- ment. Their sharp beaks, which once cut through the current of the river Main, pushed by synchronized rowers, point towards the underside of the mezzanine. Car storage tops, mass produced to fit atop specific vehicles, appear to be polished down to a glimmering white surface, becoming behemoth bones.

Stagnated vehicles, their movements are removed from forward motion. In the stillness of these scalped car tops, the strangeness of their storage appears. Pack in a suitcase, an inflatable pool, let it carry the dust of your home to a whole new outdoors. Taken from their elements, these containers enter the scale of stability of a silver gelatin print, or the skulls of dinosaurs, flesh eroded, carbon dated xxxx million years. Their severance dilates the time of their previous use, specifically because it inhibits these functions.

As carriers made to cross water or asphalt or air, confiscating their motion de-transits them. The insertion of motion in another work, Ferryman here inserts a misstep. Two videos float along the edge of a stage. Facing the ceil- ing, there is a heavy sense of compression in the films. The camera’s zoom renders it super flat. Certain details–windmills, electrical towers–struggle to be recorded as more than a texture beneath the screen. The content of videos are identical: a mash up of several man-made structures, car traffic in tunnels, taken from different points in the world. However, their playbacks are slightly misaligned. The space created in between their hobbled dou- bling gives me a memory of their synchronicity that I do not have.

Perhaps their compacted form is because it’s impossible to tell how fast we are going. They seem to be captured from a camera on a bus, or a car, or a train – at a more than human speed and distance for visibility. The delay, the compression, the speed take part in an ambivalent physics. The laws that regulate these structures that fire our coal and control our water flows both scintillante and limp as a recorded image.

Much like Hammerhead, the videos observations abstracts these titans of utility into. Composition of mechanical forces, whose manned physics cre- ate specific social rules within their built environment. Their stoppages at once keeps our man-made water system and electrical flows in motion while betraying their own (inevitable) disaster. How does such a severe interven- tion upon the land escape my eye? How is it not seen each time I fill my glass from the tap, take the ferry? Camouflaged by its repetition, these technol- ogies may work in the shadows, a second “natural” layer. You should never think about it.

Come Hell or High Water presents several artificial displacements. They draw the innate intrusions of infrastructure on constructed space into this red room. With an anatomical attention to its parts, Aninat and Shim Sutcliffe describe a spectrum in which these objects, brought here as art, occupy at once the stage of infrastructure and product.2 The artists perform the most personal depiction of this social and technological contingency, arriving at these works through conversation, quality time. Their own attunement with the built space is manifested in sculpture interventions and observations.

2. Drawn from Mathew Poole, “Infrastructure, Ideology, Hegemony”, in Between the Material and the Possible: Infrastructural Re-examination and Speculation in Art, ed. Bassam El Baroni (Sternberg Press: 2022): 51–68.