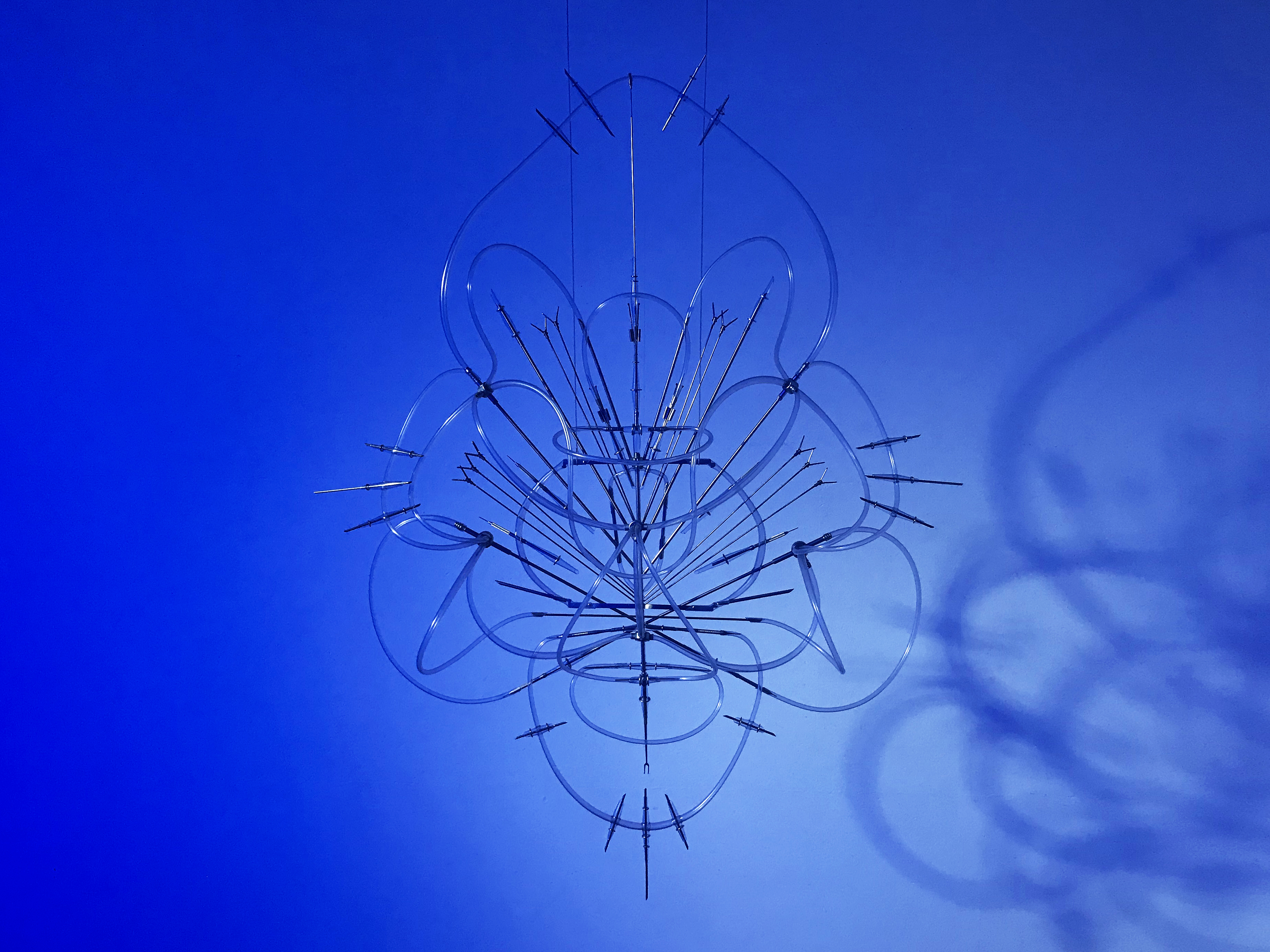 Cura Te Ipsum, ” heal yourself “. It was on the basis of this injunction that Floryan Varennes explored the feld of care during his residency at the Ferme Asile in Sion, Switzerland. Used to plastic contrasts and semiotic shifts, he explored the ambiguity of the medical domain by bringing it closer to martial arts, questioning the antinomic curative dimension of war and the inherent violence of healing processes. If it is indeed about care in his works, it is above all about self-care, referring to the need to take care of oneself, as well as to the self-destructive impulse contained in each one and which one must guard against. The ” heal yourself ” is thus coupled with another injunction, that of protecting oneself from oneself, so that the tension perceived in the works of Floryan Varennes seems above all to be the spectre of an internalized violence, projected onto sculptures whose absence of representations of the body calls for our own image.

An ensemble of plastic tubes and metallic medical instruments taking the contours of a flower, Iris is a floating bas-relief, human-sized, projecting a threatening shadow on the walls: a futuristic coat of arms, the complex structure of the work confronts us with the materiality of the medical equipment (scalpels, pliers, probes, …), both tools of care and weapons that dissect and bruise the flesh. The tubular interlacing that connects these different elements still plays on the ambivalence of the hospital imagination, referring to the state of suffering of the body, as well as to the network of cables that keep it alive. With Panoplie 2.0, Floryan Varennes continues to explore the connections between healing and war, based on the military tradition of displaying the weapons of warriors defeated on the battlefield as trophies. A mark of triumph, this practice also has an apotropaic dimension that the artist emphasizes by using medical equipment: he uses surgical retractors to support double glass arrows, as well as dried stems of purple echinacea (Echinacea purpurea), a plant with antiseptic and anti-inflammatory virtues. However, arrows armed with two points prove to be a threat to the enemy as much as to the archer who is bending his bow: the work thus suggests that it is also from oneself that one should protect oneself, considering the clean body as caught in an auto-immune struggle.

However, there is no fatalism in the artist’s statement, who certainly confronts us with our own self-generated ills, but at the same time offers us remedies, drawn from medical technologies, phytotherapeutic traditions, and sacred rituals. Another bas-relief, Semper Fidelis, even opens the paths of healing to other perspectives, including the Other in the self.A speculum, a gynecological instrument, serves here as a container for ivy, a plant associated with fidelity: that of lovers, but also that of medieval warriors, united even to death on the battlefield. Mixing war and care, Floryan Varennes considers here the possibility (if not the necessity) of finding resources in the Other, symbolically signified by the presence of the climbing plant, and visually by the incongruous encounter between

metal and plant. Never represented and yet omnipresent, the body is suggested by the medical instrument that materializes the contours of a body-receptacle, evocation of the sensual connection between two human beings who interpenetrate, unified in a symbiotic apparatus that ivy rightly evokes.

Juxtaposed with references to plants (iris, echinacea, ivy) that come in different forms (by analogy, dried, alive), it is however in an abyssal atmosphere that Floryan Varennes has chosen to present his sculptures, immersing the exhibition space in a bath of blue light that significantly alters the perception of shapes by changing their tone. The feigned darkness in which we are paradoxically submerged, thus generates an intimate atmosphere propitious to introspection. The blue light is also a reminder of the cold and sanitized atmosphere of hospitals, where pain and its appeasement are mixed and mingled, a metaphor of our own psychic mechanisms of destruction and healing, inextricably linked. Seductive and threatening, Floryan Varennes brings out from his works all the ambivalence of care and violence which, far from being opposed, are united in a Pharmakon, pointing out both the affliction and its remedy.