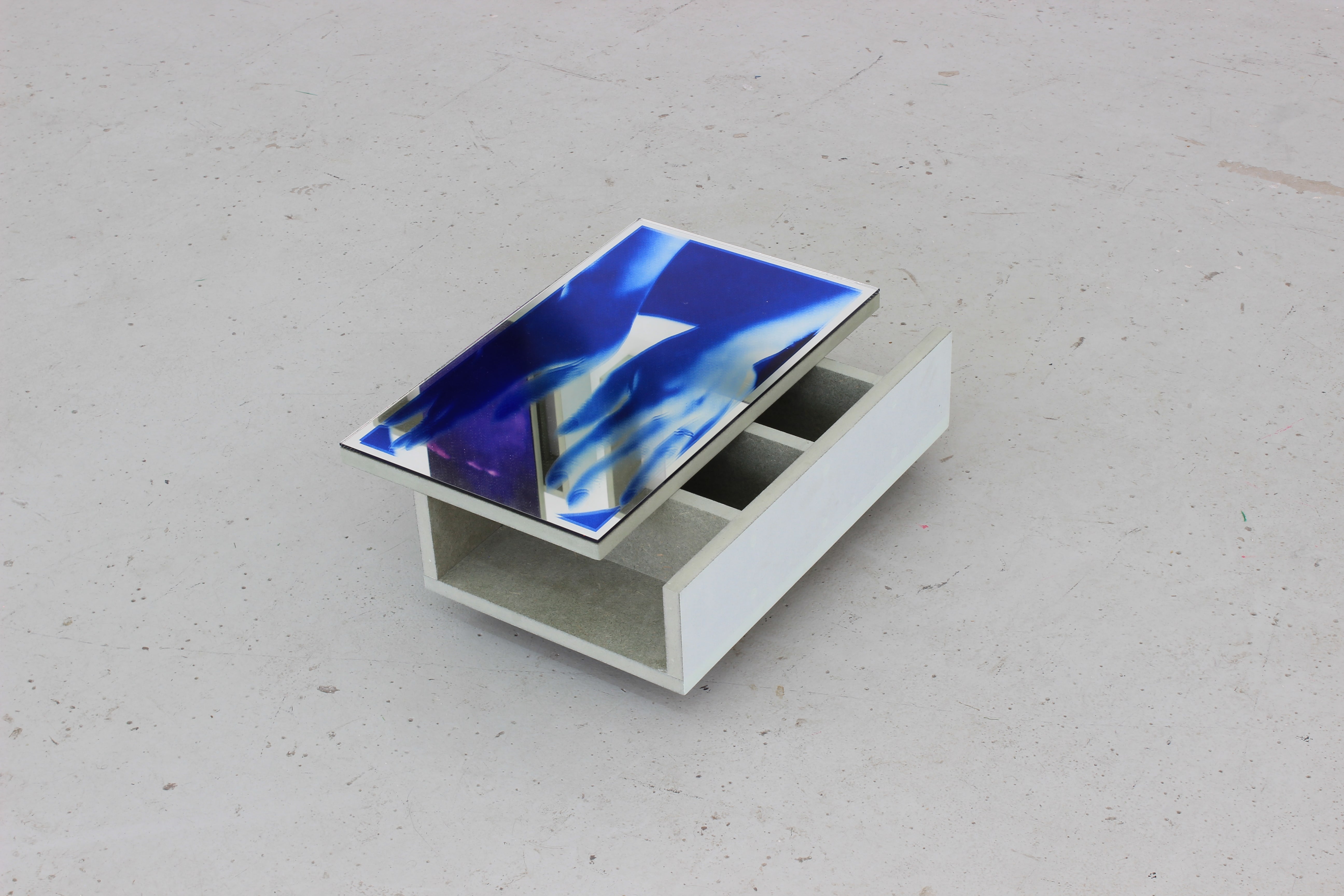 « Oedipa stood in the living room, stared at by the greenish dead eye of the TV tube, spoke the name of God, tried to feel as drunk as possible. But this did not work. » – Thomas Pynchon, The crying lot 49

To settle in images as in a space from the rear where spectral figures and gestures would outline the possibility of a counter-world. It would be a matter of reversing the space, provoking a vertigo, insinuating the floating of an inverted reality. In fact, space and time cross the image in the work of Ludovic Sauvage and induce the starting point of exploded forms. Daytime TV would be like a plot, made of alcoves hidden under reality ; of absences and presences whose material would have been disseminated here and there. Towards a sensitive and codified space where each surface reflects as much as it absorbs, and where each element replay its own revelation.

A mise en abyme that could be compared here to what some critics have called “metafiction” as a literary genre[1]. In its postmodern extension, fiction beyond its strategy of self-reference[2], pastiche and quotations to earlier genres[3] unfolds as a reflector of what shapes our relationship to the world. It thus attempts by the absurdity of its scenario to paradoxically snatch the texture of reality. In the same years 1970-1980, this taste for archetypal appropriation is the trademark of the Pictures Generation artists, one of the critical vectors of which aims to uncover the simulacrum peculiar to the mass media. But it is in the 1990’s that artists will fit into the fictional process to extend it to the exhibition display, thought of as a transitional space[4], suddenly ready to exalt reality. As with literature, fiction as a tool highlights the degrees of maneuver in our relationship to reality. These formal juxtapositions generate a porosity between what is illusory and real, intensify what is outcropping and relay a proximity to the world. But what about a metafiction that goes from the literary genre to concrete forms, applied to the materials of reality?

It is perhaps from this intuition that Ludovic Sauvage conceptualizes over time a practice of installation where images take shape by their deconstruction in the environment. Each gesture empowers them and operates a temporal shift, as they become by turns, moment, object or pure surface. Metafiction is therefore not so much about pastiche but rather to inhabit images. If he extracts a battery of stereotyped patterns, snatched from their context, it is to generate a malleable material and extrapolate them to new situations, to expand the atmosphere of a world punctuated by inconsistencies of which each form seems to flirt with reality and give it a closer taste. The gesture thus injects the images with a captivating formal presence of the most elusive, situating them as against time.

Daytime TV, does not escape this process of appropriation where now the simulacrum is stretched to the limit of abstraction. Ludovic Sauvage infiltrates the image except that here he abandons a frontal use of light for a digression through the object. In addition to images, pieces of furniture spread in the exhibition space. Perched on water-repellent wood modules – a distant nod to the original function of les Bains-Douches – surfaces are no longer fixed but transitory shots whose images are incarnated on screen mirrors.  On the ground, printed mirrors could illustrate, in the manner of chapters, domestic manipulations, not without being tinged with a charming strangeness, and which blue velvet touch remains intangible. Inserted on modules, systematically offset from their structures, these works envision an unveiling of the image, such as a concrete shadow drawer revealing a reality sometimes silent, barely concealed. On the wall, cottony spectra nuance and weigh down the atmosphere with purplish mist as a gradation printed on sliding mirrors. Except that here, mirrors are no longer intended to enlarge the space but simulate to scramble it, already in an intermediate stage. Blue surfaces embedded and perforated -recurring motif-tool in the artist’s work – project a missing part, where the image vanished, it only reflects that of the inverted space in which we might abandon ourselves and dive. It’s up to us to let ourselves be sucked in, to settle in the darkness of the off-screen. So that the missing image reappears elsewhere, illuminating another interior, inside of a jacket left hanging.

At Les Bains-Douches, Ludovic Sauvage materializes a perceptive loop that suggests reality as much as it misleads it : a sort of temporal ellipse substituting the linearity of time. Each form is emancipated at the same time as they participate in the exhibition ensemble. The mirrors constantly bring the screen of reality in a mise en abyme, crossing it and surrounding us. If the original meaning of the image is diluted it is in favor of a new receptacle – Eternal loop. From now on incarnated in the mirror, images would make us doubt the objectivity of the latter, no longer intended to reflect what we can not perceive but transfiguring its presence as an instrument of self-discovery[5] over what escapes us.

[1] Particularly American literature, few of the following writters have been mention such as : Thomas Pynchon, Robert Coover William H.Gass.

[2] GASS, William H, Fiction and the Figures of Life, New York, Knopf, 1970. Gass states a fiction genre of literature staging a mise en abyme and its own critic in order to demonstrate a second level of speech.

[5] DANTO, Arthur, The transfiguration of the commonplace: a philosophy of art. Harvard University Press, 1981.