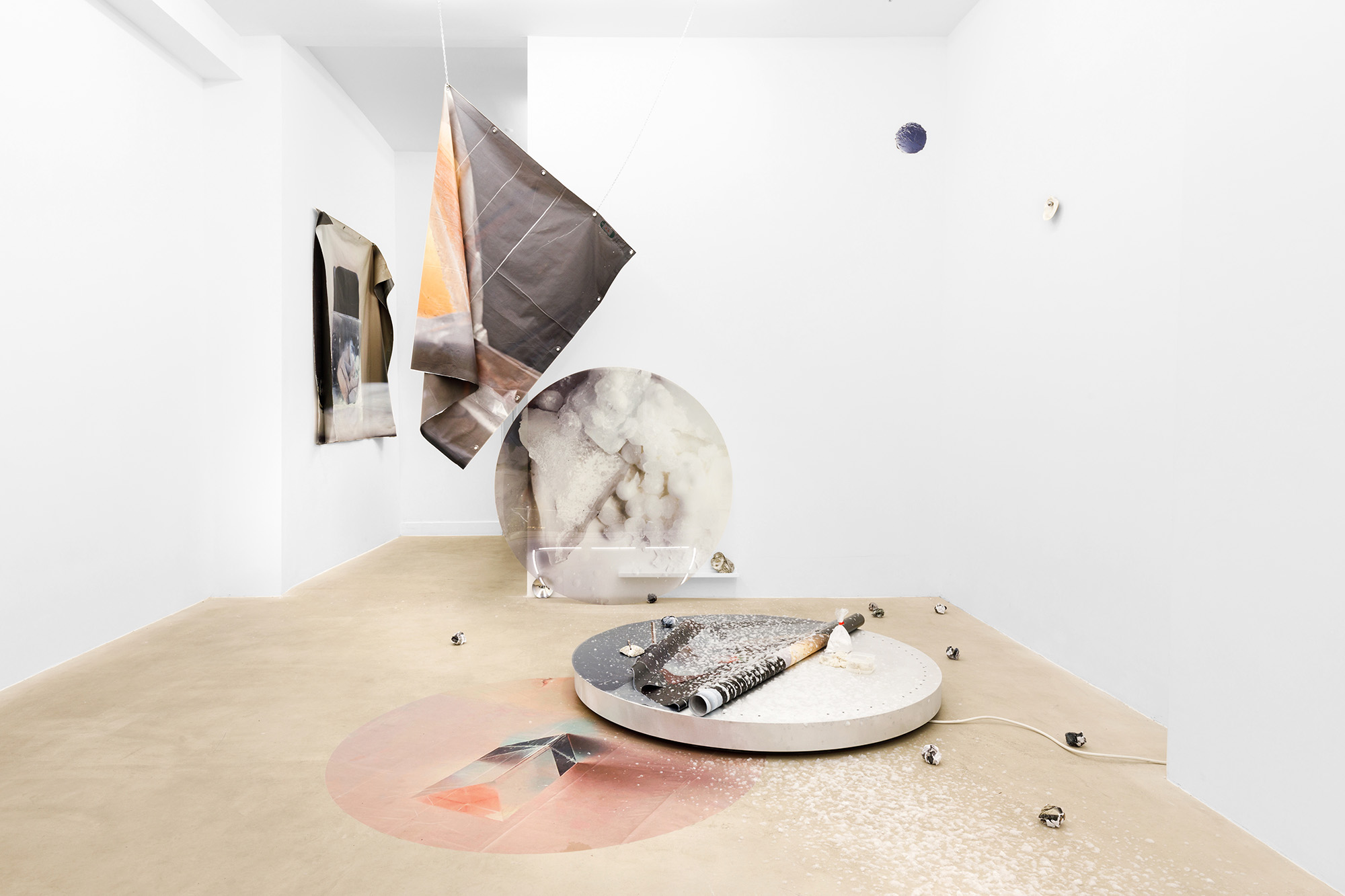 de l’Ekumen project finds its origins in Kyoto, in the context of a winter residence of Aurélie Pétrel and Vincent Roumagnac at the Villa Kujoyama, of which they are both 2020 laureates. During two months (instead of three months initially planned, the residency was indeed interrupted due to the pandemic situation), they carried out a fourfold research in Japan in dialogue with a dramaturgical work based on the photoscenic adaptation of Ursula K. Le Guin’s science fiction novel The Left Hand of Darkness (1969). Firstly, their research looked at the futuristic cryospheric landscapes in Japanese science fiction and Japanese cyberpunk – from the emergence of the sub-genre in the seventies/eighties in relation to its Western expression – to its contemporary manifestation (research carried out with local researchers affiliated to the collections of the Kyoto International Manga Museum). In a second movement of exploration, they investigated the phenomenon of transparency in Japan, with a focus on the shifts between the opaque and the optical, and between 2D and 3D, in the architecture and arts history of Japan, a focus coupled with a field approach to the glass and mirror craft of the Kansai region. White powders were the third axis of their research, and this from the study, on the one hand of «oshiroi», the white powder traditionally used as a make-up base, and on the other hand of «gofun», a pigment obtained from the grinding of dried oyster shells. In the second part of their residency, and based on this multiple research, they staged the play from the theatrical transcription of the novel, first indoor, in response to the SF architecture of the Villa Kujoyama, and then in the mountains of Nagano. This work of mise-en-scène in collaboration with Simo Kellokumpu (choreography/performance) and Nagi Gianni (masks/performance) was documented through photographic shots; the latter were then transformed into photographic objects to compose the narrative corpus of the duo’s photoscenic piece, de l’Ekumen, the third of its kind and the final episode of a trilogy.

Pétrel I Roumagnac (duo)’s photoscenic pieces take as a starting point literary and/or theatre material. So far they had worked on Shakespeare (A Midsummer Night’s Dream), Borges (The House of Asterion) and Euripides (Pasiphaë’s monologue/The Cretans). In the third piece that they carried out at the Villa Kujoyama in Kyoto, they chose to work on the technofeminist/cyberqueer science-fiction novel by Ursula K. Le Guin, The Left Hand of Darkness (1969). The experiment with the photoscenic pieces resides in the fact that they never perform those theatre works (the «live» part) in front of an audience as a «show», but instead, they collect photographic traces of the various rehearsals/ performances in specific locations, in order to re-stage the work, in a deferred way, in the exhibition space, or in a theatre; this « re-staging » operates through the unfolding of the piece otherwise, in the absence of the interpreters of the text, of its logical, conventional, embodiment, but within the spectral persistence of the scenes, the choreographic games, and other performative gestures, as well as the preparations and the «afters», all the ritualistic components of “making-theatre”. All the pictures printed on the heterogeneous elements of the installation are shot by Aurélie during the period of mise-en-scène, in relation to the specific geographies and seasons where each research-creation takes place (Finland/Portugal/Japan). All the photoscenic pieces work on the same display principle: all the photographic objects are assembled in the form of a stock, a reserve, a latency in the exhibition space. Over the course of the exhibition of a photoscenic piece, groups of objects, predefined as «scenes» are taken from this «reserve» and are staged in a space close to the «réserve» (reserve) called « plateau » (proscenium/stage). The display of these scenes is changed regularly, one following the other, during the duration of the exhibition, so the two sets «réserve» and «plateau» are in perpetual motion. de l’Ekumen operates from its prologue (titled « décor » i.e. set) and for the following acts, according to the same regime of double-spatialization and reconfiguration/metamorphosis.

Ashe I am writing to you from the ice, from the northernmost latitude. The present is in two states. Time goes on when we stop and freezes when we decamp. My fingers are incandescent, the blood vibrates against the skin of my fingers on the paper in the shelter of our tent. Tonight I was preparing kadik genmai and the earth-like scent of your hair emerged, at Ebos’ lake, with a taste of dirty snow which reminded me of bodies and cities. Since we started walking on the glacier, I feel like walking backwards. The kemma is coming and the sap flows back up in me as in an ascending moon. Close to the estranged softness of my friend’s body, I feel like a hemmen covered in crimson buds. My words dissolve like the ash in the melted snow and tint themselves with the Obrin’s lava dark red colour.

When I came to see you at Estre three years ago, the sun was with us but we parted in the ice. I would not try to break it: at every neserem, it densifies not in oblivion but in the certainty of our bond. Here now, it is everywhere and nowhere. We move along the blizzard walls as if locked inside a sphere. Its blinding whiteness riddles our retinas with sparkly stains, as does volcanic slag on the snowfields. The landscape clenches around us like a crumpled paper ball. The wind always eventually dies down therefore the abstract plateau resurfaces. I watch out in the shadows for the ice’s hazy accidents, indistinct crevasses, questionable rocks, the red mountains’ silhouettes.

When in the evening we find ourselves back in the tent, it becomes a hearth. The fire inhabits the space between us, radiates in the space around us like the rays of a sun, a sun among others as I learnt thanks to the Ekumen. The incandescence doesn’t come from the stove nor from my body nor from Ai’s but from this piece of darkness chasing us.