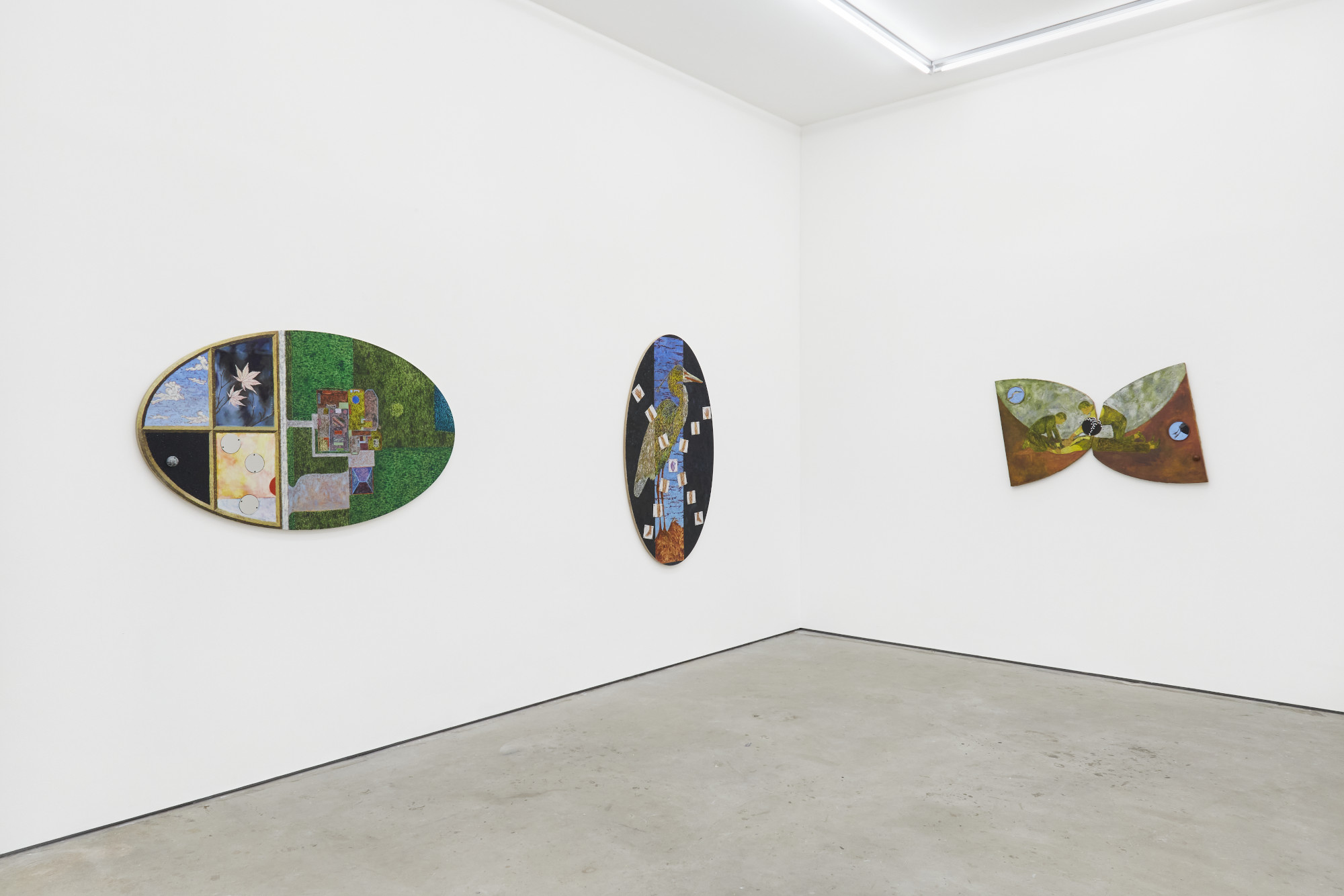 As ever-flowing ideas repeat in his brain, thoughts darting from one to the next, Kenneth’s paintings await their next move. For him, painting is what the matchbox is to a match – igniting endless possibilities before quickly diminishing into the ether. Painted on oval-shaped boards and canvases protruding with various appurtenances, influence creeps through gaps left ajar in his mind – snapshots of birds and skies taken by his father or him from his hometown in Chesapeake Bay, for example, or illustrations from a First Aid book saved while helping a family member clear their house. He uses what’s at hand to build scenes anew, the elements often frantically stockpiled on the desk of his pokey studio, quietly awaiting their turn.

Kenneth’s intuition for painting means his plans and revisions are forged directly on the surface, rarely surrendering to too much reasoning or doubt. They map both the trails he’s walked with brush and in life; as you’ll notice motifs of an endlessly entwining spider’s web in ‘Last Walk’ or the converging of planets in ‘Projection (for N. Fyodorov)’, echoing a never ending cycle. To him, a board or canvas opens up a microcosm of possibility where nature is altered to fit his criteria. Windows of incongruously sized birds or landscapes from his burgeoning collection adorn the surfaces, as other mirrored and metal portholes reflect the movements of the onlooker. The sky is an all-consuming feature of Kenneth’s paintings – he’ll use materials as stand ins for distant twinkling stars in ‘Projection’ or frequently divide his compositions by horizon lines in ‘Acéphale’. In the same way our eyes adjust their focus when day turns to night, his paintings inspire orbiting and close attuning to the abrasive textures up close; each painting inspiring a curiosity and child-like ingeniousness about our vast universe.

The exhibition is titled ‘Divinity (sic)’ – ,‘(sic)’ being a Latin term editors use to indicate an exact transcription of an erroneous original. So, he asks, are these paintings, or the natural worlds they depict, evidence of a higher power? His processes replicate the title’s structure – collaging and forging found materials to authorise them as his own. Motifs of moons and suns will often nestle their way in, reminders of Earth’s shiftings and time’s passing, as he’ll make other more abstracted marks over various sittings. He’ll mix oils with shavings of jute or dirt from his floor, the impasto effect resembling specks of moss on trees; or otherwise he’ll dilute paints in turpentine and thinner, seemingly freezing scenes under a winter frost. Kenneth works best under such contradictions – ‘setting up problems to work against’ as he describes it. Whether it’s the transitioning of day to night, awake to sleep or life to death – they take place as one, in harmony. This is an idea adopted by the Surrealists, too, notably in Andre Breton’s, ‘Communicating Vessels’, a favourite of Kenneth’s. Breton borrowed his title from a scientific experiment: when two varyingly sized jars are joined by a tube, the gas or liquid passing through each will always rise to the same level. Kenneth’s paintings ponder this balancing act, too – celebrating life for all its awe and anguish, as he asks, ‘can a painting exist as a time machine, a window, a novel, a sentence, a film, all at once?’

In previous paintings, he’ll make known this longing to sense what he can’t entirely grasp – as a hand might reach out to the sky, or an ear awaits a story. Here, he plots his routes to discovery with brush, but turns to various adornments to determine his path: metal grommets, rope and door knobs puncturing the surfaces. These accoutrements aid in negotiating an ending that is entirely Kenneth’s own, compiled only from what earth has supplied him. Until the cycle turns, with new findings and aspirations…