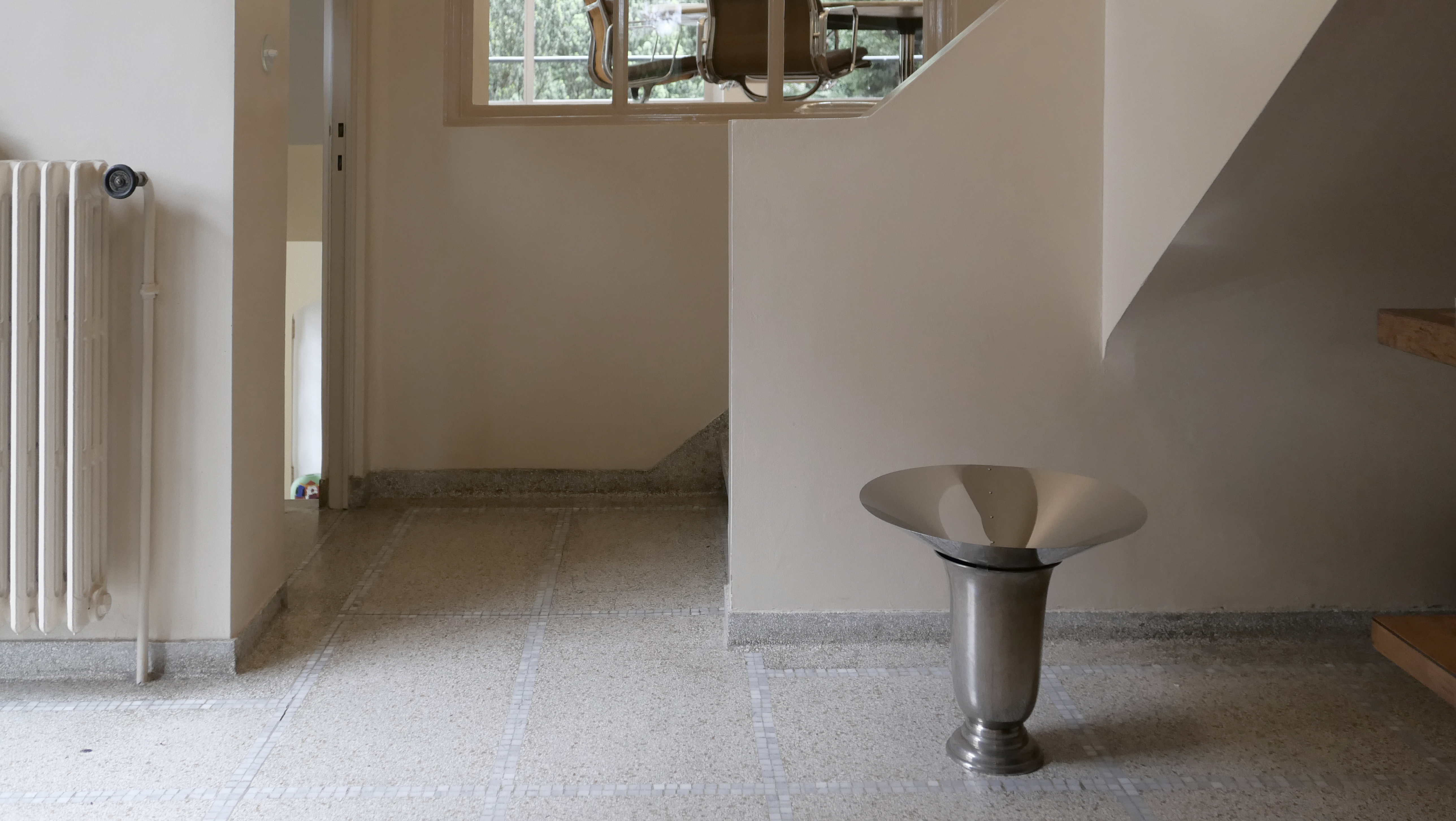 From Above, As a Rain

Bn PROJECTS & Maison Grégoire are very happy to invite you to From above, As a Rain, a solo exhibition by Valérian Goalec specially conceived for the space and garden of Maison Grégoire. 37 and H20 are the key figures and letters of the project. Water is indeed the red thread of the project, as it lies at the very chore of every form of life, with the all the more crucial and vital issues that are brought about by climate change in terms of water management and distribution. Water, which we unfortunately in Western Europe have taken to consider as a self-evident commodity, stockable, transportable and wasteable ad libitum, is currently reasserting its impe- rious rights. Whether it becomes scarcer and scarcer, or, on the contrary, unfolds its inexorable, uncontrollable, and sometimes devastating forces.

37 corresponds to human scale, that of the artist more precisely, sub specie to the 37 liters of water constituting his own body. That is why he has fashioned some malleable containers designed to contain, in parte or in toto, an equivalent volume of water. As such, these Bodies act as mediatized and symbolic effigies of a given human being, in all their finitude and interdependency with the natural elements that constitute them. Two series of modular sculptural shapes, containing each 37l. altogether, will adapt to the architecture of the Maison, and to its outdoor spaces. All in all, what certainly fascinates Valérian Goalec is to try and explore the infinite shapes that shapeless water can assume, in all its liquid and also potentially transmuted states.
A collection of vases and containers, found in Maison Gregoire or in the private collection of the curator of the exhibition, will act as supports of Catchers, a modulable series of inox steel cones of distinctive diameters (30 / 50 / 70 cm.). These elements will adapt to the aperture of the different containers, thereby expressing the necessity to catch any single and metaphoric drop of this precious element which is water. Sometimes in vain though. Endowed with a both symbolic and sculptural valence, they will be shattered through the house and the garden.

Contained and invisible, escaping our first immediate apprehension, the water will surprise the visitors upon their visit through the garden, which was also designed by H. Van de Velde. Untitled Portrait, if is, a sculpture / structure, inviting to conversation and contem- plation, will act as a freshener and stimulator, revisiting the vogue of disarming water features dear to Baroque gardens. This refreshing welcoming gesture, sometimes, but not always, very precious in a June afternoon in Brussels, will also act as an indirect reminder of the inconsiderate / wasteful use of water, which soon humanity will not be able to afford any longer. Besides, the atomized water could also evoke, if in a gentle metaphoric way, the more threatening stormy shapes and actions that water can take, as if to express its dreadful revenge, with the effects we start only to well know in our temperate climates, of a climate and water management clearly unbalanced by mankind.

The eponymous video presented on the computer of the owner of Maison Gregoire, From Above, As a Rain, will gather a series of images shots, caught on the occasion of the artist’s travels throughout France, whose shapes and / or landscapes (dams, glasses, funnels, moun- tains, valleys etc) retrace the potential liminal movements of water, adapting to a variety of situations and evoking the drying out, or, conversely, the possible overflow of these very shapes.
Dialogues is made up of 3 C-Prints which evoke a more restrained and contained, if not civilized use of water, echoing the potential activation of the domestic context of Maison Grégoire. They feature views of meeting tables, in close up, with the common thread of water glasses, half-full or half-empty, deemed to stimulate, or, a contrario, pacify business conversations or mundane exchanges.
The last piece, Titles, is to be found in the kitchen of the house, as a further illustration of Goalec’s predilection for the subversion of the usual functionality of mundane objects. Over 400 paper cups have been printed with the titles of the works displayed in the exhibition, thus acting as the list of works of the show as well as its ultimate trace.

You will be free to use it, ad libitum, to quench your thirst or to guide you again through the exhibition. Cheers. And enjoy the refreshment!