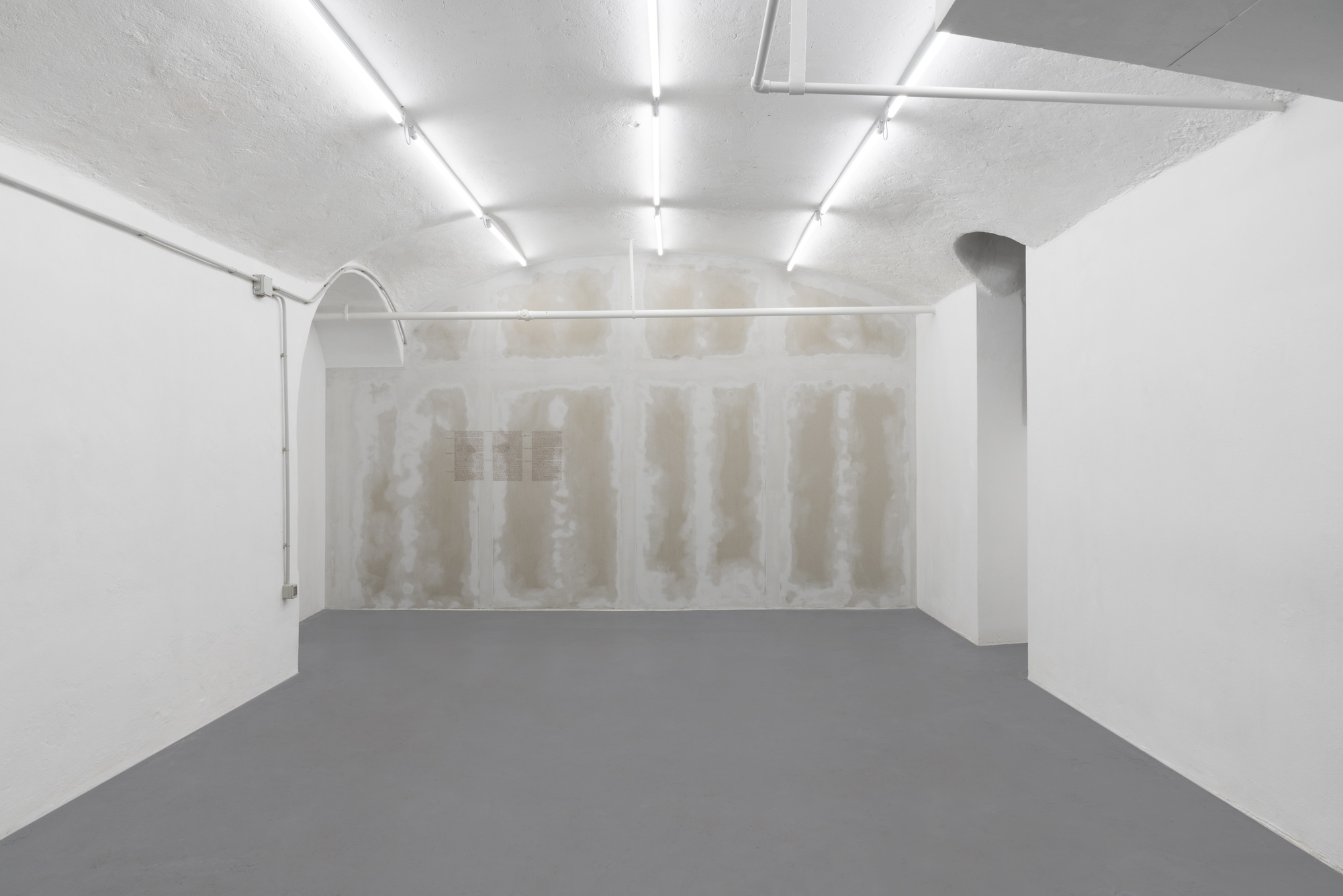 Genesi defines multiple starts inside and surrounding MASSIMO. It’s not only the chosen title of Tommaso Gatti first solo exhibition, but also the beginning of the art space’s calendar of shows which will be taking place inside its – never revealed yet – area. It comes both as the first chapter of Aparición, the critical essay that the artist started in 2019, and as the beginning of a series of events which are related to the book and designed to take place within diverse spaces. With its etymology, Genesi suggests the starting point of something new: MASSIMO is the medium through which Aparición finds its opening words.
Aparición is about a pupil and his master. The first chapter, coming as the conceptual fulcrum of the exhibition, recalls the meeting between the two of them on the occasion of a vernissage. A voice-over introduces the observer to Sebastian Shatten, an art critic and fictional character who takes charge of revealing the artist’s thoughts through his works and actions. Sebastian discusses issues like Félix González-Torres critical legacy, the act of playing in terms of metaphor for art and the poietic nature of the artistic experience. By commemorating it, the artist evokes the atmosphere of an exhibition which has been purely envisioned, while asking the observer to look at its backdrop: a sacred yet religious ambiance that enables to experience art.

On the occasion of Genesi, Tommaso Gatti involves a series of artists from diverse fields in the making of a challenging show that aims to cross multiple platforms. By conceiving part of the exhibition exclusively for MASSIMO social media, the artist marks the strict connection between the performative moment itself and its promotional tract. Fashion photographer Giuseppe Triscari and stylist Sebastian Palomares are called upon to visually outline the narration through the photographic series “The opening” (2020). Coming as a hybrid between staged and fashion photography, the pictures are a result of a performative moment in which few background actors played as guests of an exhibition opening. Posing and moving with preconceived and sampled gestures which are typically related to the exclusive vibe that surrounds the vernissage experience, they are the first unconscious users of what a show actually is.The glossy flavor that covers the resulting pictures, virtually shared through MASSIMO’s site, is deliberately in contrast with the extreme barrenness of the real life exhibition: an empty art space, composed only by the Genesi’s text itself, handwritten on a plasterboard wall that incorporates it by absorbing it into its own structure. The text thus becomes a permanent mark of a temporal interstice that survives in the very place it was conceived for. During the show, a paper publication will be presented, designed, and produced by Graphic Designer Paola Bombelli, who curates the exhibition’s visual identity.

Exhibition view by Riccardo Giancola. Courtesy of the artist.