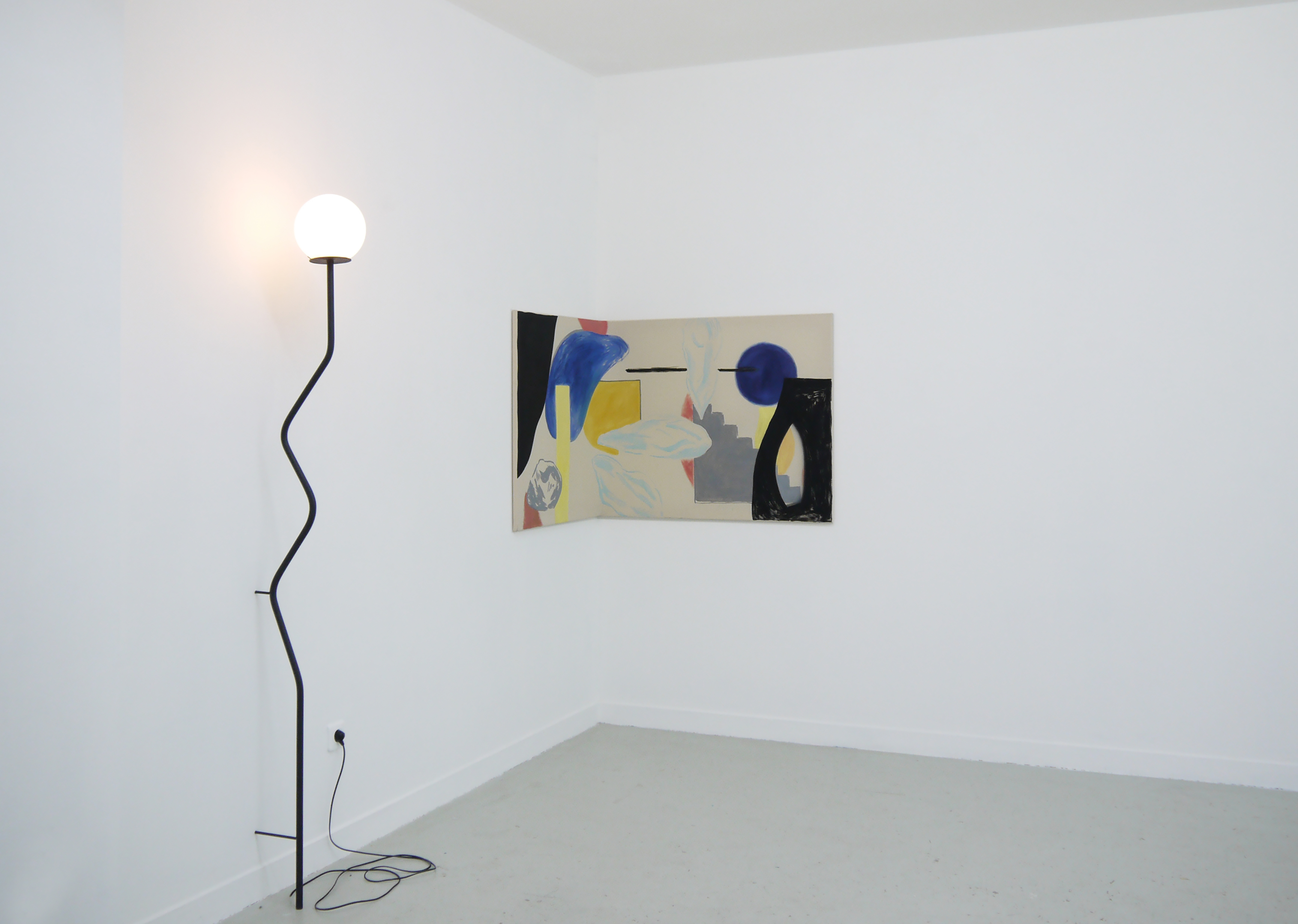 Perhaps we don’t take enough time to wander around the city, zoning more out of indecision than intention. If it might be difficult to free ourselves from the established grid of the city, we would still have the space of memory where objects and thoughts come and go. May it all escape into the insignificant space of life or reappear elsewhere.

What happens next takes place in Zoé de Soumagnat’s painting where figuration and abstraction slide, one towards the other. It is certainly taken into this desired state of floating that the feelings and enigmatic forms that she finds in everyday life come together and become triggered by voids. The studio is thus assumed to be the place where the stroll arrives, where memories flash mental images on the canvas and deliver autonomy to impressions of reality.

The gaps – Lacunes – that give their name to the exhibition would embody these interruptions where it becomes possible to venture. Deliberate steps sides on continuity, they are not so much a gap to fill but a breach to dive into our thoughts. And if, in the field of artwork restoration, they palliate a deterioration of the pictorial surface, for Zoé de Soumagnat there is no question of putting pieces back together, it consists in altering it. This would suppose hiding and revealing the appearance of the image, playing with its presence by the means of painting. After all, it would be in their disappearance that things are best captured.

This is where lies the interest of a pictorial register that shows while concealing perception. The background in rubbed tones, reminiscent of urban lights, seems to ooze through the grainy texture of the transparent plaster. From these palpable atmospheres, each “lacunar” composition diverts the superpositions of successive layers towards materials which interfere and enter into relationship. Then, it is when the surface blurs, fades and smoothes the rough edges that signs appear, daily collected by the artist. An idea of boots, stairs, then formal clues float in a completely different, indefinite space. If each sign figures, their loss of information which hung them to the sensible, drags them into a process of abstraction. Nothing binds them together any more, or it is precisely this emptiness which animates them, giving them the possibility of being the contemporary resurgences of a latent mental environment. In this hallucinated context, presences reassure the painting, and help to de-dramatize it. Street lamps made by the artist twist and ramble. Infiltrated in the exhibition space, they accelerate the night and try to delude us about the temporality going on outside.

Eventually we would end up not knowing if we are there for the painting or if the painting is there for us. Memories pass, signify and abstract in it. At Les Bains-Douches, Zoé de Soumagnat reveals a poetics of gaps, imbued with forms of sociality, hints of feelings as much as reminiscences of painting. The only thing left to do is to let yourself be embarked on a visual and mental trip, bordered by the urban landscape, knowing that there will surely be gaps.