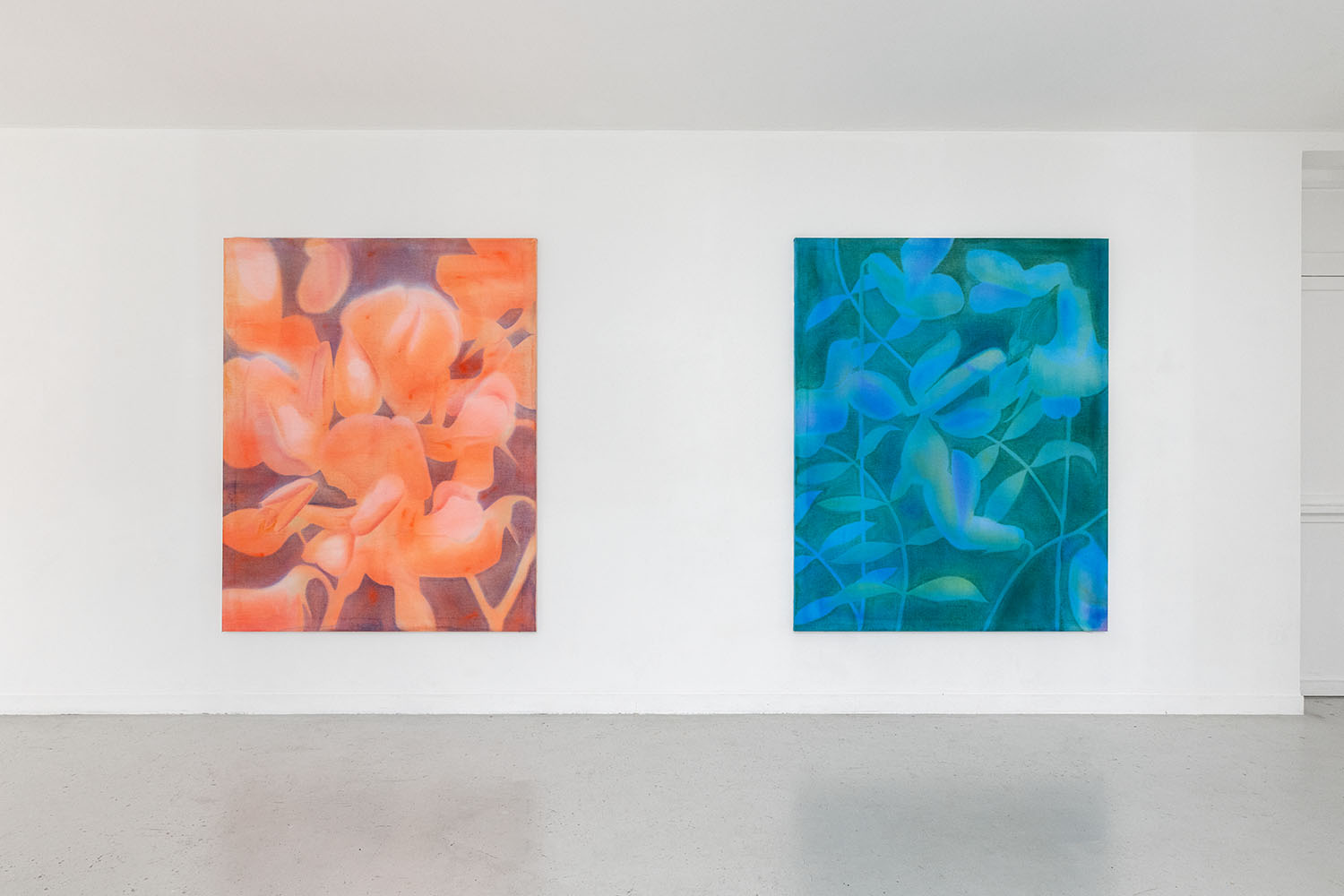 One day many years ago in Hérault, while I was playing alone by a stream, I remember being suddenly scared stiff when I noticed in the dry grass an odd-looking creature that I had nearly crushed between my fingers. Its body looked exactly like a blade of grass but it was its eyes that had frozen me right there. In a surprisingly quick movement, its triangular head had turned and quite clearly fixed its gaze on me. The impression it left me with, beyond the initial fright, was a kind of uneasiness. Probably the idea that there was something of a malicious deception in that look, which was maybe even directly addressed to me. I had been for the first time a victim of the strategy of mimicry.

This same strategy has made the orchid mantis look like a delicate flower, which gave rise to a lasting fascination for the artist Jean de Sagazan when he first encountered it. This small insect from the tropical forests of Southeast Asia, which is related to the praying mantises that haunt the edges of paths in France, imitates the flower of the orchid to perfection – its thorax and forewings going so far as to adopt the same translucid texture, a white that verges on pink. Thanks to this the orchid mantis is able to fool flying insects, which take it for a source of nectar and are seized by the predator in a quick lunge of its prickly front limbs. A monster among the flowers. This is no overstatement because the biggest species among the mantises can indeed prey on small vertebrates (lizards, birds), even take a nip out of a human finger, and all are well known for their voracious appetite, which incidentally extends to individuals of their own species, including of course the males, whose head serves (at times) as a snack during copulation.

The series of works on view at Les Bains Douches is the outcome of de Sagazan’s discovery and exploration of this new pictorial motif, where one colored form devours another. The exhibition space is dominated by large-scale pictures worked in acrylic washes, which approach the overlapping flower-insect motif in an almost abstract way. Colorful, busy, and playing with the transparency of the supports, these oversized paintings suggest the decorative panels seen in Art Nouveau, even if a close examination of the image allows viewers to make out the silhouette of a mantis patiently waiting to pounce in expectation of the upcoming feast. More discreet and darker, the small-scale pieces work the devouring motif in a more figurative way. There we clearly see a mantis head whose jaws are busy tearing apart butterfly wings. Just like the bodies of dancers pierced through with light that peopled de Sagazan’s earlier series, the mantis, the butterfly and its surroundings form a set of overlapping fusional motifs. They are part of a triangular relationship between flowers (the model), the mantis (the mime), and the butterfly wing (the dupe), a triangular connection of love and death.

With this latent threat de Sagazan fashions a hallucinatory motif. From painting to painting, the shifting colors, sometimes saturated, at other moments thrust into a thick dark layer (the artist is known to soak some of his canvases in dye baths), conjure up for the viewer the image of an anxious unstable world. Elongated mantis heads, bent limbs in the form of a scythe, and butterfly wings sporting a psychedelic smile underscore the fictitious dimension of these painted images. A far cry from the precise, descriptive style of botanical drawings, de Sagazan’s works plunge viewers into the artifice of painting, its ability to produce a completely invented world, which heightens the feeling of repetition. There is surely a connection with the fact that de Sagazan remains as close as possible to the very canvas that forms the paintings’ support. The cloth is part and parcel of his artisitc vocabulary, and some of these works, as unlucky as his butterflies, were torn apart to end up transformed into a shirt or a trench coat.

For an earlier exhibition, the artist provided in a short text the story of a hallucinatory vision, a setting of multiple suns on a beach of incandescent psychedelic colors where various figures, deformed by some sort of anguish, indulge in an explosion of violence. Beyond an ode to the Living and its ability to surpass humans in their creations of form, the paintings making up the show “Le Modèle, le Mime et le Dupe” point to a search for an intense visual experience, in which lights, shadows, and colors reveal a form of struggle with the world, doubtless so as not to let oneself be devoured by its mirages.