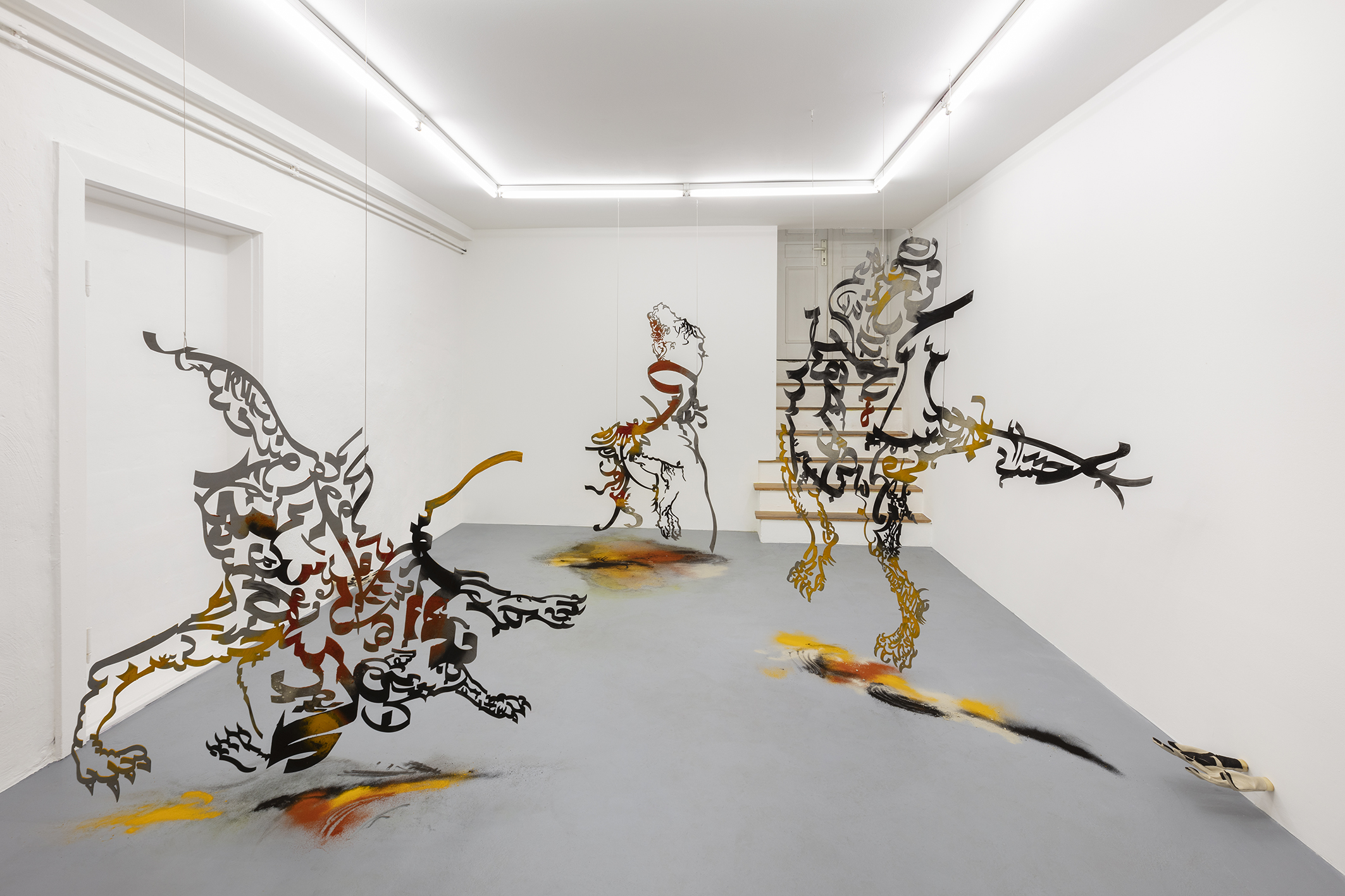 “In Tunisia, the hinnā night is the night before a ceremony. For me as a child, it was a time of immersion in my family’s culture. Saadiya, my father’s sister, would prepare the hinnā in a yellow plastic bowl, stained with the dark color of an orange pigment, which she had seen so many hinnā nights. When the mixture dried, she would take small portions and hold it in her mouth for a while, to rehydrate it with saliva, before pressing it onto my palms. A hypnotic gesture that lasted for hours. During the night of hinnā, the tattooed limbs are wrapped in cotton bands or silk scarves to protect the contours of the design and the success of the color. Hands and feet, thus wrapped, must remain motionless without touching the ground throughout the night, after which the bands are removed from the feet and hands and the dried hinnā is rinsed off. What remains is the imprint of that initial dark, full-bodied paste, which will last for many weeks. The sculptures on display crystallize this moment, one night only, not touching the ground, wrapped in a mellow color, and a spicy smell.”

Monia Ben Hamouda (b. 1991, Milan) presents Night of Hinnā, a sculptural installation at Bungalow, ChertLüdde. Following the belief that each individual is inextricably connected to their family tree and the psycho-mental universe of their ancestors, Ben Hamouda attempts to master her influences in a contemporary and constantly changing landscape. Born into a Muslim community as the daughter of an Islamic calligrapher, Ben Hamouda navigates and confronts her ancestral heritage through what she calls a shamanic process –creating works that act as gestural exorcisms of the expectations placed upon her by family, tradition and the politicized present, drawing their power from the urgency of expression.

Borrowing from the tradition of Aniconism in Islamic calligraphy, Ben Hamouda uses this ancient strategy of circumvention in Aniconism as Figurative Urgency (2021). Calligraphic brushstrokes that mimic Arabic text yet signify nothing, the iron sculptures are abstract forms that occasionally have the claws and hind legs of animals such as the dog – a creature considered impure, harām, in Islam, but which for the artist possess a strong life energy. Covered in fragrant spices such as cumin, curcuma and curry, the sculptures protect and are protected by their medicinal, ceremonial, culinary and ritualistic properties used for thousands of years. The series Night of Hinnā (2021) is a questioning of the artist’s identity through multiple lenses– that of her
innermost self, her Arab family, and the western world. The sculptures, laced with hinnā and drawn in a nontraditional, western design, are scaled to the artist’s hands– albeit slightly tight. Like a pair of ill-fitting gloves, Ben Hamouda’s dim memory of decorating limbs reflects the paradox of a gesture that feels at once familiar and alien, the ownership of which is the artist’s key to understanding her own personal history.