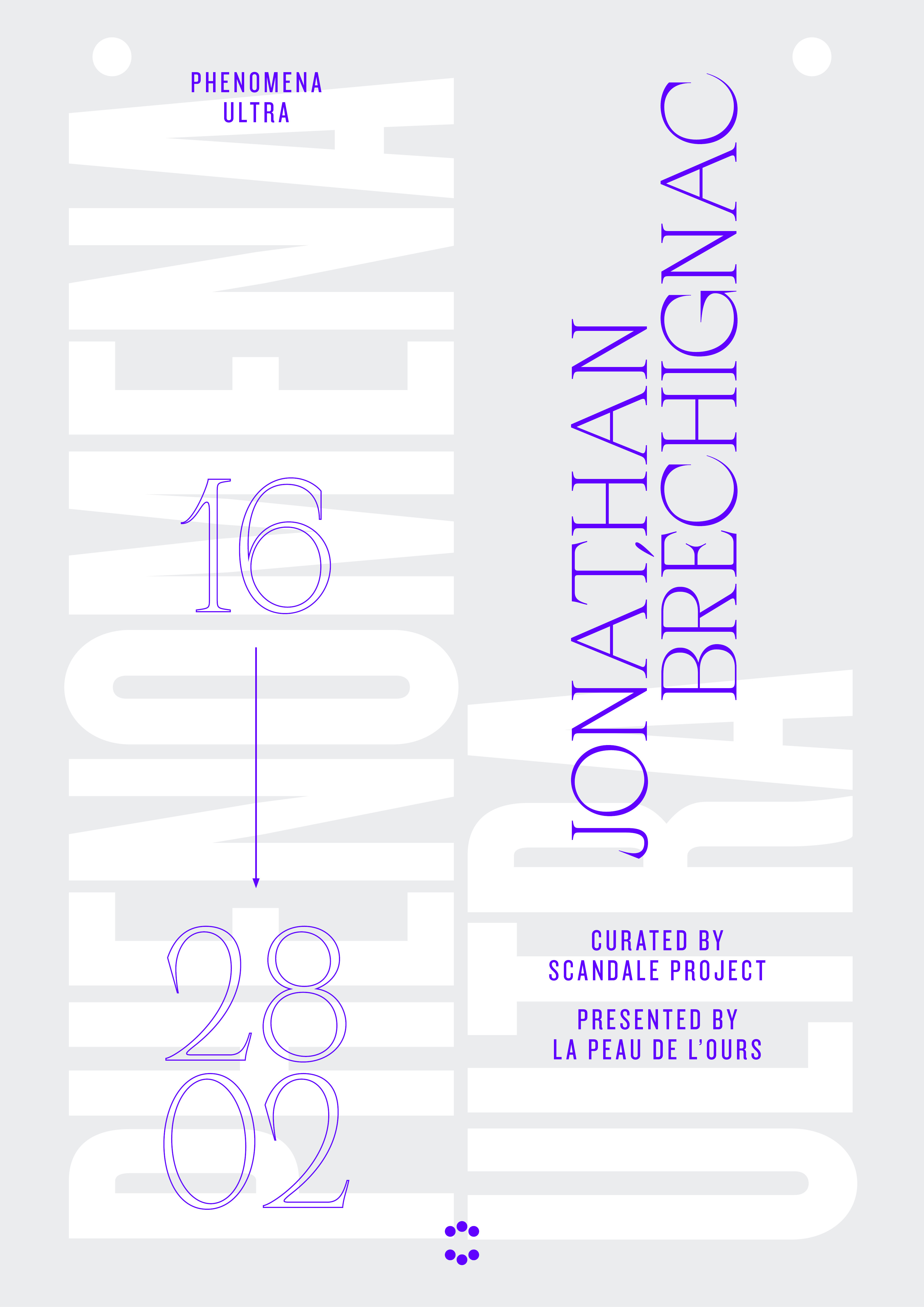 A simulacrum of nature blending organic and artificial.
An exacerbation of the matter, all the matter as long as it mimics reality.

Fascinating, iridescent, bioluminescent, sometimes troubling. Phenomena Ultra results from natural occurrences, which Jonathan Bréchignac speculates upon a nature, where organic and artificial unite. His approach relentlessly plays a collision in between human and « natural » matters, blurring the perception patterns. Everything is not what it pretends to be anymore. If the environment is overflown with life and movement, the biomimicry (term popularized by Janine Benyus in 1997) era assimilates its shapes and features, enhanced by the technological temptations, innovations and further technical progress. From now on, categories flicker and announce a state of doubt towards matter and form. Infused with absurdity along an aesthetics bound to science fiction, Jonathan Bréchignac’s work mingles desires and glitches chasing for evolution where organic and technology blend together.
The ambiguity of a nature 2.0.

The attractiveness for an implausible reality, that Jonathan Bréchignac translates through speculative forms hold on the edge of realness. If technological advances urge for a reawakening and a transformation of the environment, the downward spiral would consist in a deep distortion of phenomena. Matter seems to have mutated while neglecting its original properties. Unsettling, the new specimen of stones (Alien Rocks) and the pseudo-organic fragment (Pseudo Eco-System) close to a new era, imagine a mineral and vegetal matter, affected by synthetic features. Each extrapolation lead to hybrid forms and reveal an environment, where human activity spread through the biosphere. Human influence over the planet results in a new geological era : the Anthropocene1. These speculative layers pose a reflection over “the now” and the future ecological preservation. Either from the unnatural frost (Zéro Degré Celcius) or the delusive iridescence (Thin Section), Jonathan Bréchignac examines tangible aspects of these events. Contrastively, subtle treasures (Svalbard Petri), observe their initial condition idealised by the inclusion process inside epoxy resin. Jonathan Bréchignac draws his inspiration from the Norwegian Archipelago of Svalbard, where an underground bunker is buid, the Global Seed Vault. The arctic geology gages the world seed care with the aim to preserve the genetic diversity and predict from potential natural disaster.

The successive components of Jonathan Bréchignac’s work suggest foreseen shapes towards a world transformation, delving into the porous nature of elements. Therefore, the co-existence of “natural” and “artificial” pushed until the inability to distinguish one another. Each alternative, each anticipation, subsequently sets out “ways of worldmaking” using the formula of Nelson Goodman (1978)2. A world of multiple versions advanced by Humans. Creations, descriptions and symbols through knowledge producing a truth tailored for a version of the world. If truths evolves within each version, Goodman explains the importance of compositions and decompositions, deletions and reformations, as “our capacity for overlooking is virtually unlimited”. Fictional worlds are possible ones, emerging from real worlds. To Goodman “Worldmaking as we know it always starts from worlds already on hand”. Based on the form and the matter Jonathan Bréchignac unveils his own version. As if calling the fictional in the plausible would allow the access to another truth.

Phenomena Ultra becomes a laboratory where hypothesis develop ways of worldmaking. Facts oscillate between the inconceivable and the credible, between illusion and sciences. The deliberate fictional turn opens a spectrum of observations over the world available. In the style of “an adventure of science pushed all the way to the marvelous, or the marvelous envisaged scientifically” mentions Maurice Renard, behind the term “science-fiction” (1909)3. Investigating the temporality where human and non-human, organic and artificial intertwine towards abundants possibles and others strangeness. Over the exacerbation of the matter, all the matter as long as it mimics reality.
To come – to become. 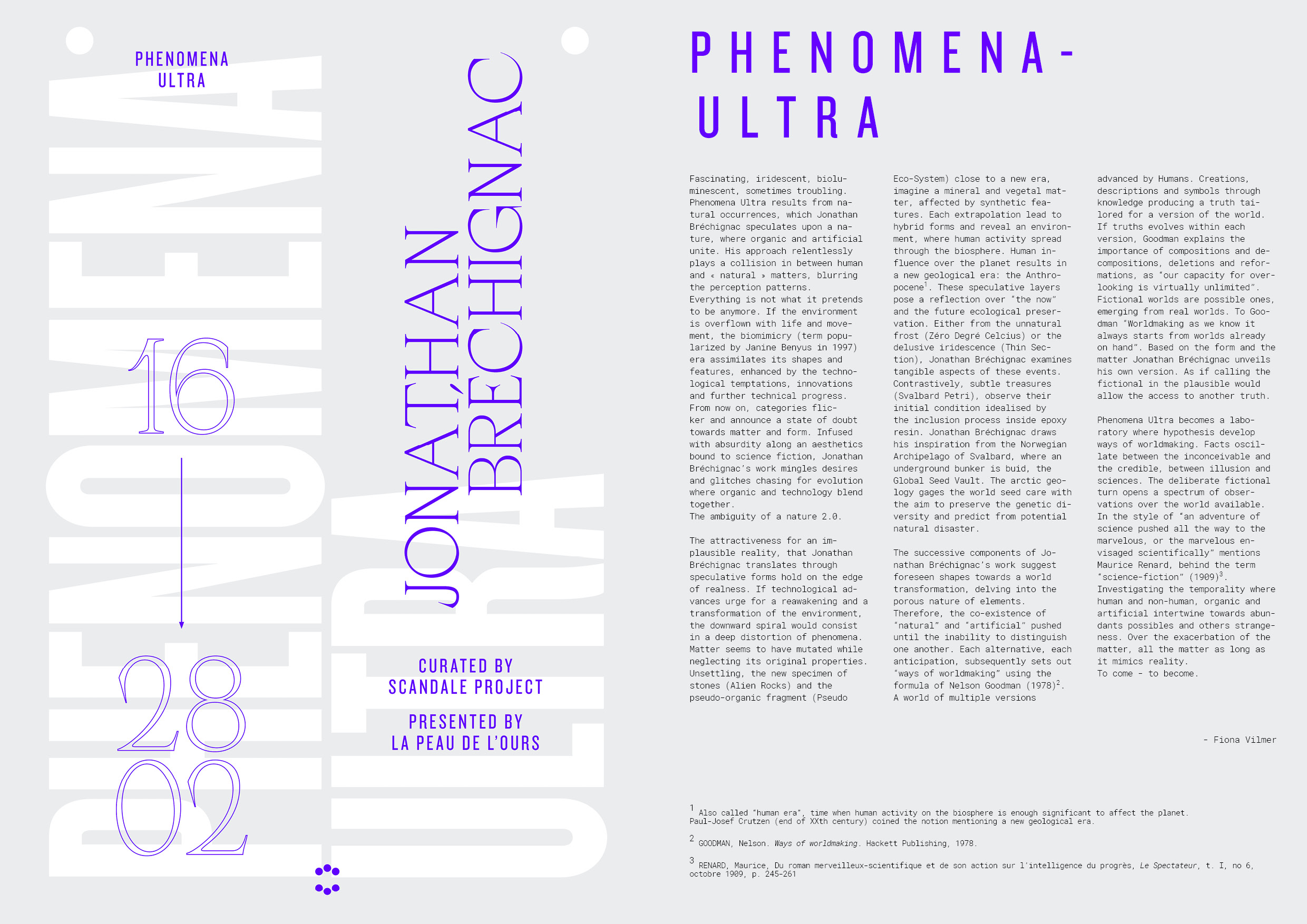 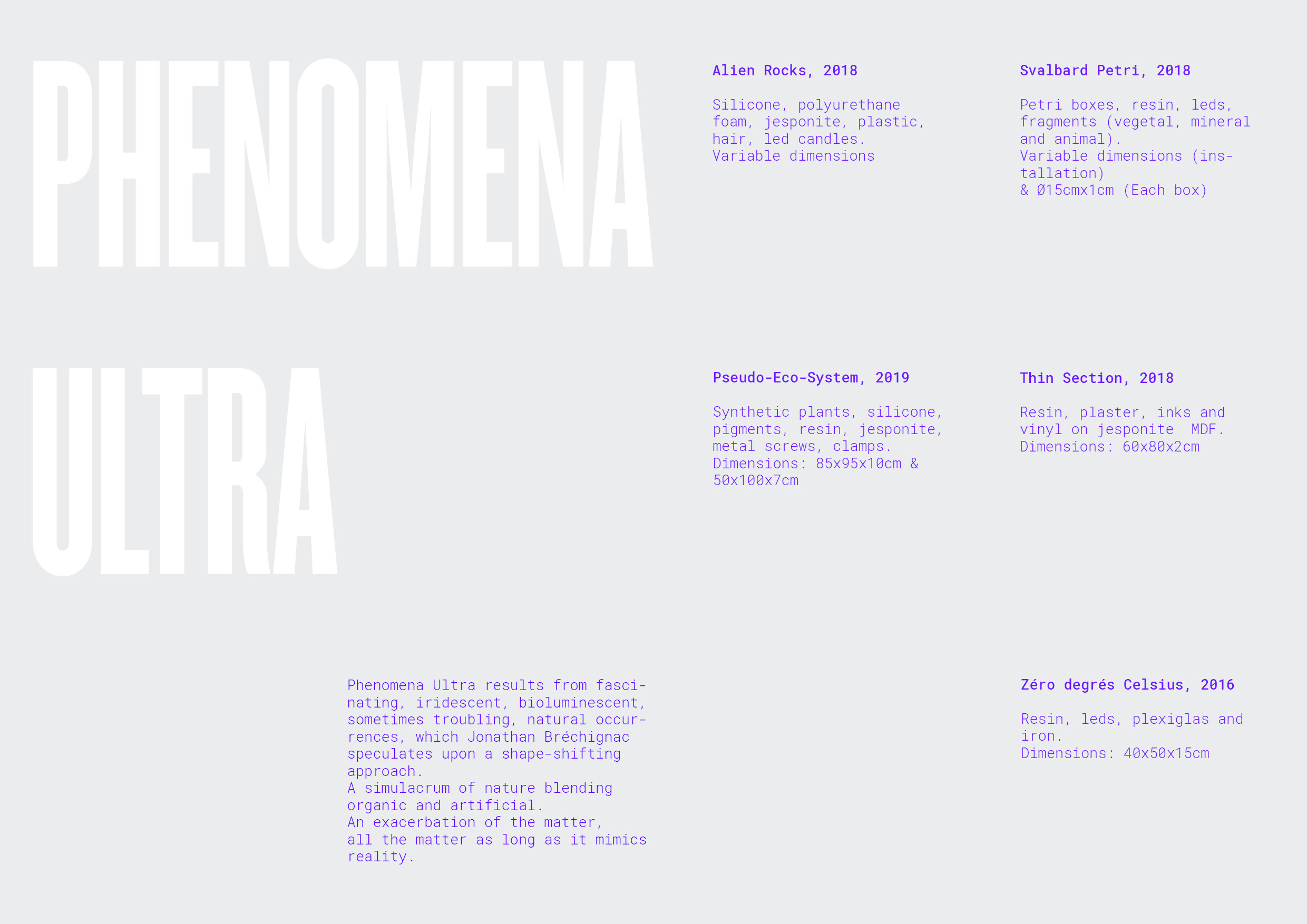 Jonathan Bréchignac explores this discrepancy, through the development of processes inspired by scientific mechanisms.
Mirroring the way science always departs from nature (such as the research on bioluminescence inspired by fireflies), he uses technology as tool to cast light on the captivating elements of the environment. The resulting works act as an ecosystem, where each part dialogues with the rest. His practice offers a singular look at the capacity of art to grasp the indefinable, and the way in which nature fascinates the human mind. Jonathan Bréchignac was born in Provence.

He is a graduate of the École de Recherche Graphique (Brussels) and Saint Exupéry (Marseille). He lives and works in Paris.