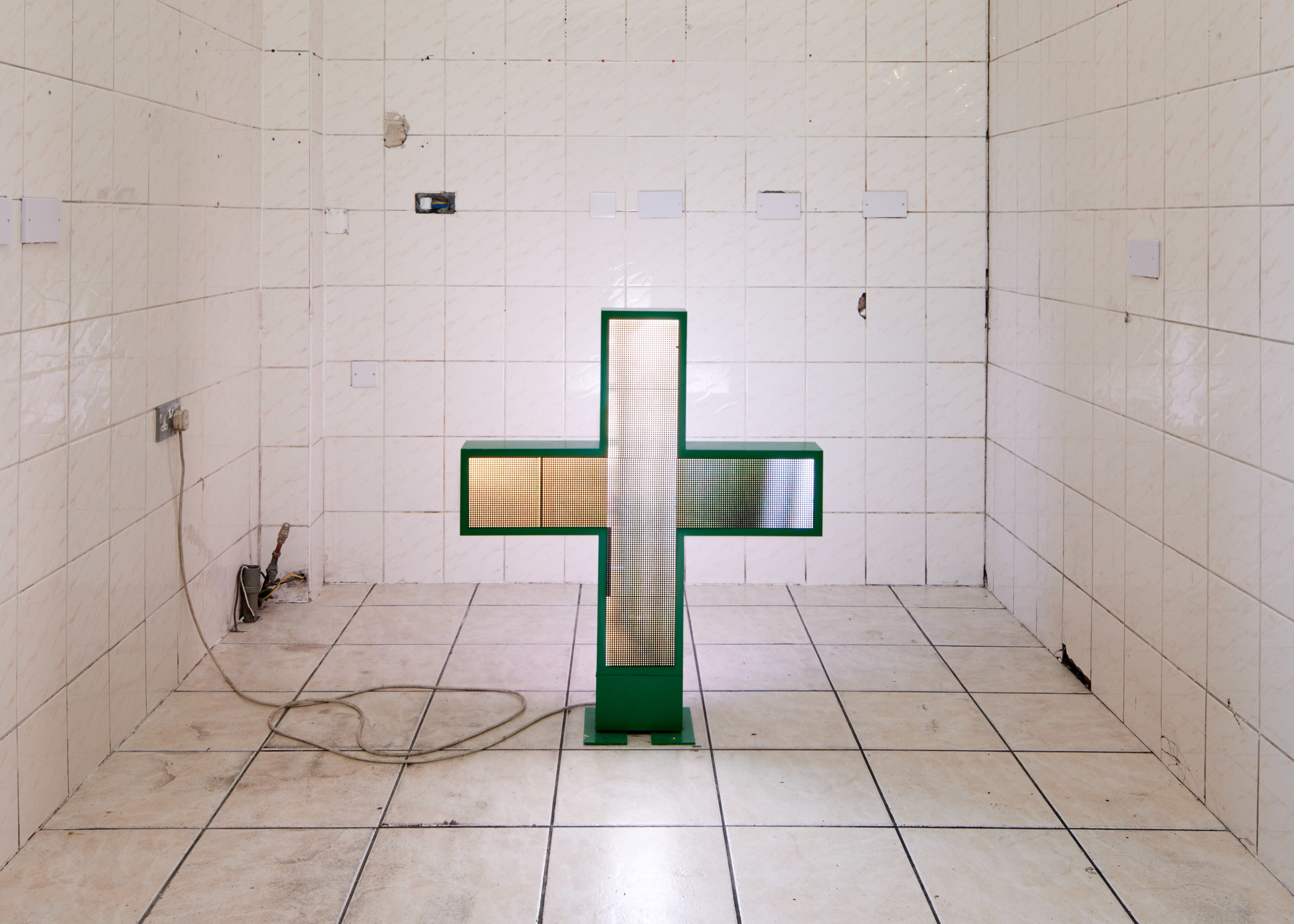 Qualified to Care draws its title from Racheal Crowther’s background as a long-serving support worker. Having spent six years working in the care sector as a caseworker, her exhibition at Ginny on Frederick combines much of the altruistic and investigatory skills she gained along the way. By repurposing discarded objects she’s procured over time, Racheal then carries out a meticulous deep-dive into their origin – the practice revealing an affinity for uncovering the hidden truths about people.

The evidence in question here is a discarded LED ‘Pharmacy’ sign she found in Lewisham. Initially intrigued to reprogram the outdated inner mechanics, Racheal’s interrogation of the sign’s provenance led her to meticulously research its past, noting her fascination for found objects ‘revealing manifestations of their environment’. Her realisation of the sign’s universal reading as a beacon of care, too, quickly became the framework for Racheal to modify the software inside, transforming it into another of her thorough investigations.

Playing inside the cross is a film chronicling the decline of Queens Road Day Centre in Peckham – a former meeting place for adults with learning disabilities. She videoed the premises in 2018, the day before it was due to be destroyed, having studied a month-by- month demolition schedule. She captures the occupants’ belongings; cameras, dvds, toys, files, seemingly left in perfect condition just hours before their diminishment. Racheal’s footage, refracted inside the pharmacy cross, another relic of both rescue and neglect, exaggerates a sense of loss at the demise of both – all the more so as she realised the former day centre is still empty four years on. As you walk to approach it, the muffled sounds of her shuffling footsteps and a distant alarm emanate from two neighbouring speakers, placing us at the centre of a desolate scene.

There is something especially appropriate about Qualified to Care showing in the particular context of Ginny on Frederick, a gallery which has the same tiled walls and signage left from its former life as a sandwich shop. Both the gallery and artwork share a similar reverence for holding on to the past. For Racheal, objects that, in her words, ‘evidence the impact of existence’, gain resonance by passing through hands, their wear and tear revealing something of the people who once owned them. Through her close rumination of found items, impressions reveal themselves over time, continuing to surprise and intrigue her.