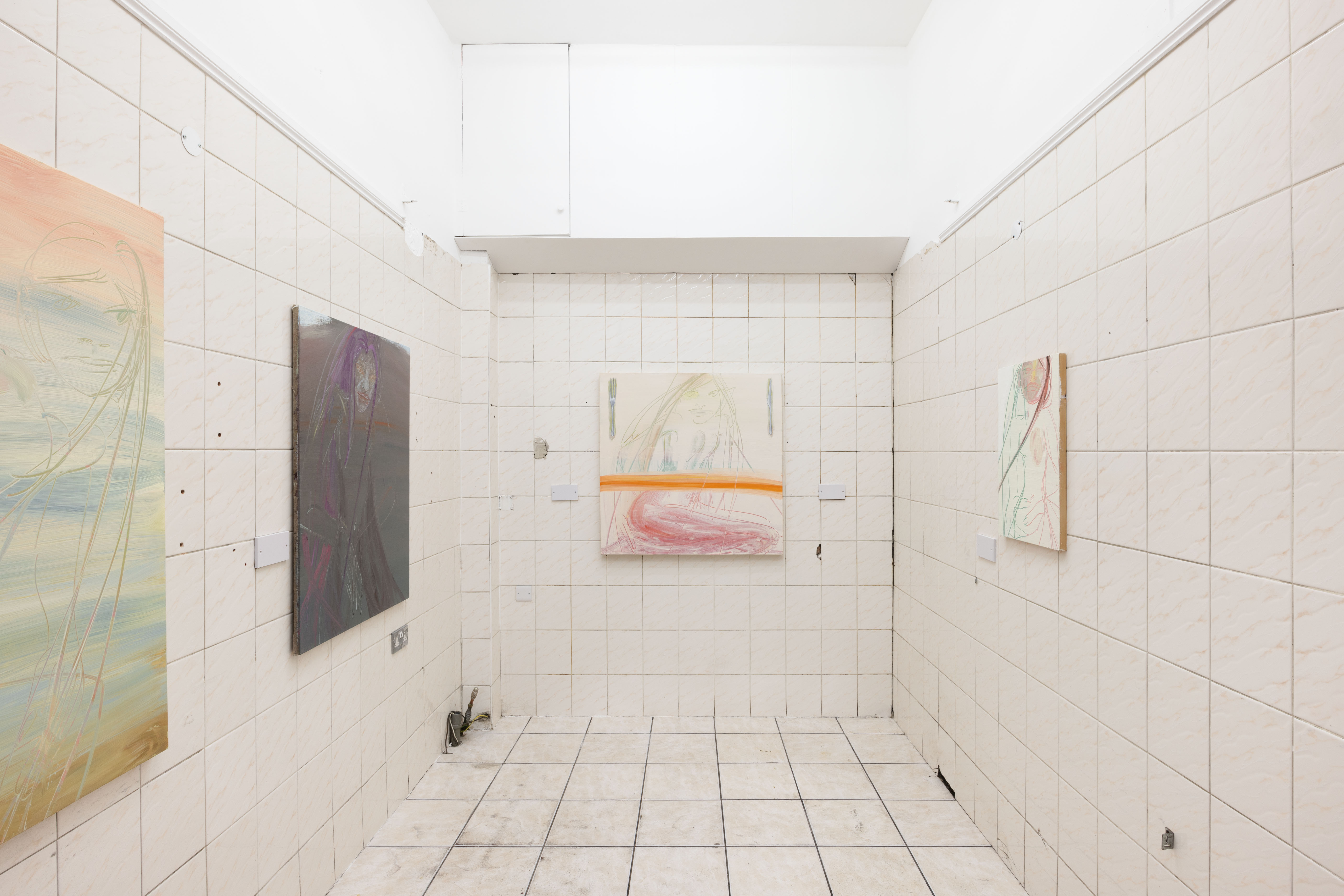 I have come to a recent conclusion, there are two tendencies when writing about contemporary painting in the context of an exhibition:

1. To aid and abet the image

2. Or, to fight against the image

Take the first tendency: this text wants to write you around the four corners of the square. Together, spiralling around the impasto paint, smothering you with words so thick you might mistake yourself and the author as encrusted within the furrows of paint. Often the effect of such writing is much like swallowing the thick milkshake sludge following a heavy meal; it produces a cloying sensation at a time when one most hungers for a palate cleanser.

In counterpoint, there is the second tendency: the text that wishes to overwhelm the image, to do – in swift, hard keyboard strokes – the act of taking apart the image. The writer’s rugged palms and shovelling pen get into the buried depths, which are supposedly hiding underneath the smooth, manifold surface until all that remains is the torn-up soft tissue of the flayed canvas.

These are my observations, and proving the extent to which they bear out as facts in is not the task of this text. The point is one of delineation, which acts as a prompt, a wayward proclamation: a proclamation that is about as silly as any proclamation about the direction of all contemporary painting. I have no desire for argument per se, but it is easier to begin by staking out a claim, even if that claim ultimately bears out as incorrect. I do such erroneous thinking for one reason alone: in the hope that you might re-asses what you expect of this page in relation to those images, the ones that hover above the plane of the page.

Rarely do these kind of things (exhibition texts and its various siblings) bother with a direct address. There is rarely a ‘you’, at least not specifically, everyone a little too embarrassed about the looseness of this lettered stare. There is a preference towards the general and the amalgam over the terror of speaking directly-to. It is not the etiquette to suggest that there is more in seeing the image yourself, than having the images filtered through the textual chasm of this blank page. Nevertheless might I suggest that it could be a useful deployment of your time to avert your eyes from this affected attempt at critical assessment to take in what you see.

The page, even in its self-conscious linguistic blush, could never do what you can already. There is already apparent herein a diminishing return.

Dare you to go forward?

*
I recently had a conversation with a friend who I had not seen in a long time. I sent her a series of texts, the kind of funny, flirtatious messages that one might send a stranger. My phrases were idiosyncratic, globules scooped up from my subconscious that I thought she might enjoy. Words felt pliable and free, dashed across the ludicrous background pattern of what’s app.

The outcome – outside of my own enjoyment – was that she had no understanding, the gap in our friendship meant that the mess of my texts was nothing more than obfuscation. In the missed connection of our exchange, I thought about how, unlike the strangeness of words, the eye finds figures so easily, even when they are not there. There is even a name for this illusion: pareidolia, coined by Karl Ludwig Kahlbaum in papers titled with grand, somewhat magical names, like ‘On the Delusion of the Senses’.

What is obvious is that we need so little information to see in the blur of light evidence of ourselves in the form of faces. The eye finds figures in everything. This illusion is part of what animates a line, what gives the gesture of an emptied-out paintbrush, dry and bristly, torn across wet paint, its sudden consciousness. In the space between a flat background, we begin to see approximations of ourselves. Out from the lipid blur comes the flesh of figuration, which spurs the illusion of the
accoutrements of self. So easily can we tie these scratches to the body: in a suspended fork we see the handling of food, and in a paintbrush we can imagine the handling of one’s own image. Feed me, paint me, so the self says, give me the precision of your own consciousness.

*
And yet, despite this uncanny ability of the mind to fill in the image with its own narcissistic replication, the actual figures of the people we love and surround ourselves with remain forever unassimilable.

Writing to Andrei Tarkovsky, a fan confessed that “…we really don’t know our mothers’ faces. And how simple…”

I may be wrong but something about the fervency of the confession made me think that she was talking about a mother who was still alive, the longing not for the once dead, but for a realisation, often part of ‘adulthood’, that what is seen of another is always only a phantasmagorical glimmer, because how simply, even, most especially, our beloveds’ faces oscillate ~~~~~~~~~ in and ~~~~~~~~ out of recognition ~~~~~~~~~

Even, most especially, ~~~~~~~~~~~~~~~~~~~~~~ we think we know the intricacy of their features for a future time when we might need it, gathering their ~ scars ~ and ~ furrows ~ with the anxious lasciviousness of a collector:

As though we could gather all versions of their pouts, all instances of their eyebrows ~ ~ ~ ~ before the wilful forgetting (yet we always end up with this, ~ – ~ = more approximation)

A good example of this is ‘seen’ in the doleful gaze of babies. People often misapprehend their looking. A common adage is that ‘real love’ is about being ‘seen’, and so people look at the stare of infants, and declare this the surest sign that love is a vision caught in the eye of the beholder. What they believe they are apprehending in the mirror-ball eyes of a new-born is clarity, yet what they are really viewing is the sensation of a very warm blur, of abstraction taking place.

Put another way, all features, including your mother’s, are ambiguous.

Close your eyes, and imagine the only image you truly know. Do you see your own face? Once, it was surely a little roundel, youthful and sweet. And then it aged. And aged, again. It is probably still doing that.

Or, it did that ageing thing like Marguerite Duras’; in one single fact. The round flesh-face that departed from her suddenly in “one day”, age spreading over features “one by one, changing the relationship between them, making the eyes larger, the expression sadder, the mouth more final, leave great creases in the forehead…its substance had been laid waste.”

She wrote in The Lover, “Very early in my life it was too late. It was already too late when I was eighteen.” For her, the resolute return to dissolution had already taken place at the cusp of her twenties. The lines were returning back into the substratum of the warm blur, the edges made up of the hues of one long season that lasted all the way across her life, the wrinkles of skin slipping down the wet surface of the sun, the mirror, the scratched outline of her jaw’s edge was dripping.
They lasted all the way down to mouth of the river.

Duras’ face, the only one she recognised as herself, was made up of her body and its face carried across the length of an impossibly warm day. The rest of her faces were unsortable and unclaimed as the befores and afters of someone else. None of them were her own.

I cannot say whether I have fallen down the trap of my own making ‘outlined’ above – lapsing into the act of aiding and abetting, or fighting against the image – but if you have dared to come to think ending, I will leave you with a question: what is true about the image of any one face? I imagine if I could answer this, it would be that there is nothing true about an image of a face, nothing but the background, the warm blur from where we came. I can almost feel it, the haze of abstraction entering in?