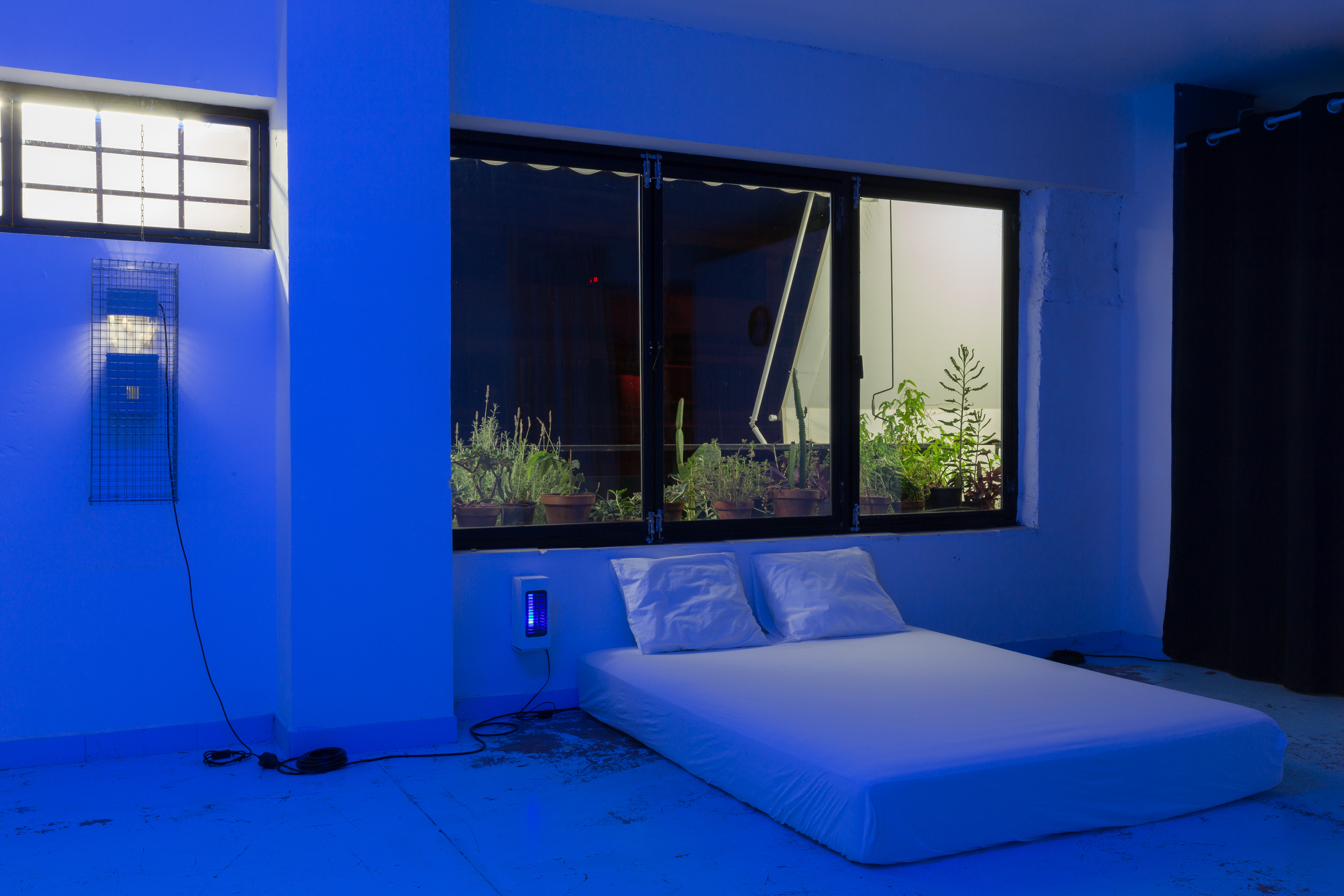 They entered discreetly one by one. Regularly when returning from a trip and often in the night, we discovered new ones. The living room of the apartment was not yet called Hôtel des 3 collèges, but they had already taken up residence. It was as if they had heard that discussion we had had one evening in April with Maxime Bichon. There was an intuition that this exhibition would address our insect instinct.

The tacit agreement of this curator-artist relationship induced the fact that we had to come to terms with this new cohabitation with another organic form. No longer considering them as enemies to be killed, but rather as living beings like roommates. First there were the moths all over the curtains, then the slugs in the shower, the classic summer nights, with their mosquitoes, and then lately the praying mantises above the bed. The order of things was thus turned upside down, we had to take into consideration the invisible, what we generally wish would disappear.

It was therefore a question of accepting the changes in status, going beyond the modification of a domestic space to an exhibition space, but rather to consider our living room as an hotel space. Each one having in common the notion of hospitality and sharing.

Once past the curtains that separate the apartment from the hotel we are projected into a strange night – the day played outside to better highlight the night of the interior. An inversion of positive and negative is woven throughout the forms that appear on the walls. Each of them like the crystallisation of the passage from one state to another. These indefinable states could be those of the emergence, the time of intuitions, those which appear in the night and then take shape the cocoon of a butterfly. We stay or pass through the only room of the Hôtel des 3 collèges as if we were on a runway: a tarmac for thoughts.

This tarmac for thoughts appears before the transmission, before the material fixation.

The tarmac of thoughts can merge from a form of dialogue that is played out with oneself or partners during the formation of the exhibition.

In the hotel room, as in the first part of the exhibition in Rome, there is this portrait, a metallic object containing chemically antithetic products (here melatonin and caffeine), which seems to transmit a feeling towards a situation that is built in a tension. A positive tension, through the reading of a mantra that makes our bodies melt into the installation.

During the ten days when the sculptures began to take their place in the apartment, we had to tame them as new narratives that will rock our daily lives. And then within the conversations, those on the bed and those between Rome and Athens, it became clear that we had to be confident that we were talking about intuitions. To assume that this intangible form could generate its own narrative, that of suspension.

Sometimes we feel that things are related without knowing why. For the person who looks, who receives, the meaning may seem obvious, but for the person who produces, it is not the transmission of meaning that it is played out, but rather in the harmony. The harmony comes from an intuition. It is entirely the expression of this intuition. And for harmony to occur, for intuition to have the power to produce harmony, it is the framework that we give it, our attempts that will reinforce it.

In the room of the Hôtel des 3 collèges, in the real night, while the insects pierce my skin, I reread Marienbad Electric: Enrique Vila-Matas tells us that Dominique Gonzalez-Foerster, who often works at night, once told him that “ideas often appear like northern lights”.

The Hôtel des 3 collèges would thus be an intrusion of life into the Athenian nights, tinting them with its coloured veil.