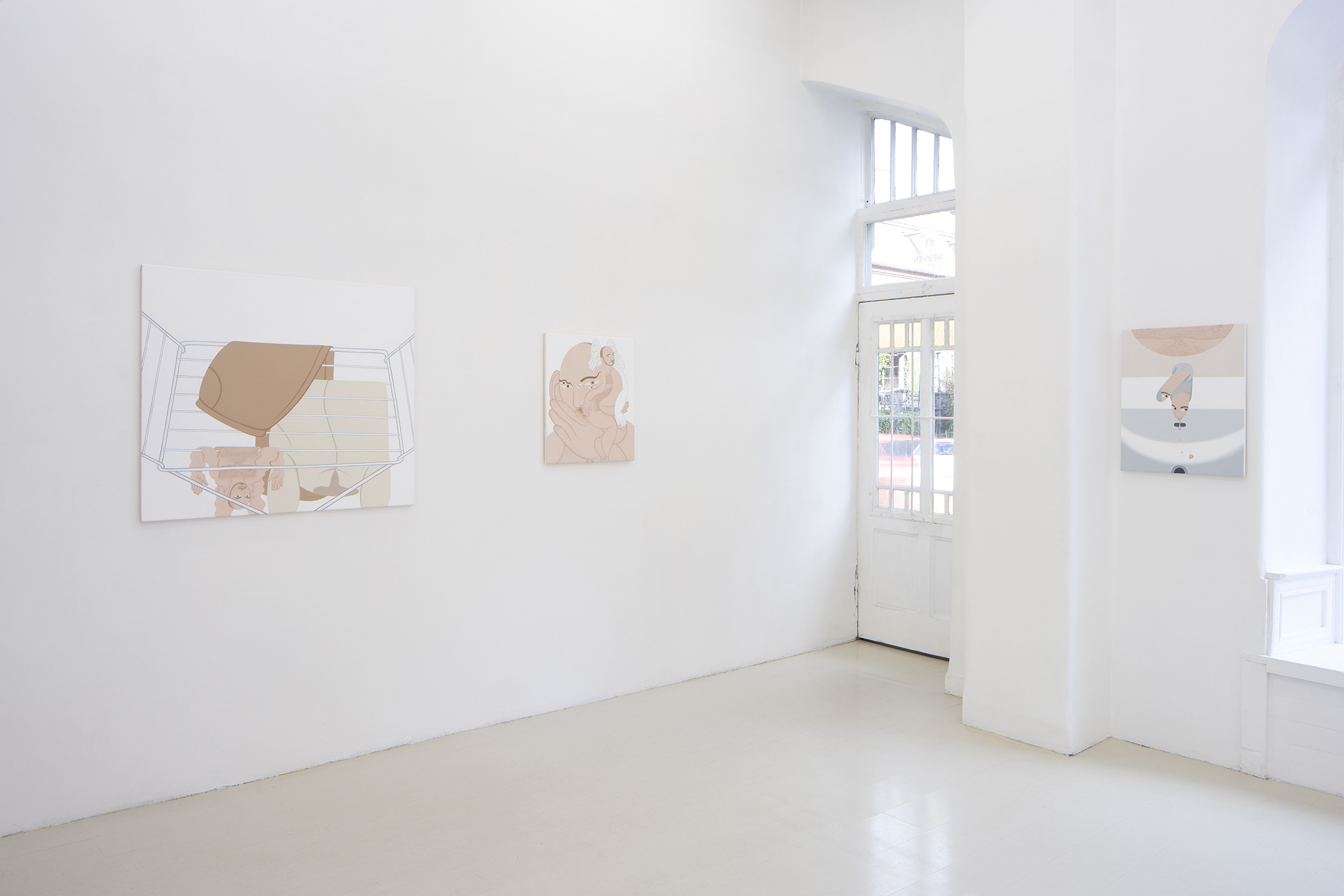 The Problem I Did Not Consider

A figure stands in front of us. Dressed in a casual white shirt and khaki pants, their hands hold up a foot in the usually unfortunate act of looking what they might have unintentionally stepped on. It is with surprise, then, that under the lifted sole we do not find the proverbial dog dropping or chewing gum, but a naked figure, squeezed and compressed, clearly bearing the face of Alexander Basil.

Reiterated both as his human self or in the most diverse forms, like a button, a clock, a bee or a candle, Basil himself is the uncontested centre of his own art practice. With self-portraiture as a point of departure, the German artist has made of this classic painting trope – the painterly apotheosis of self-exploration – a vessel for an intriguing and powerfully empowering narrative. Almost always alone, in the privacy of his apartment and naked, at times uninterested in our look, while at times aware and seemingly welcoming our gaze, Basil allows us to peek in what is most private and secret in his life, both physically and psychologically. Depending on the exhibition, we might observe his painted self bathing in his bathroom or masturbating with a dildo, struggling in banal daily occupations or daydreaming of male-maternity. Basil manages to communicate visually in a tone that is both humorous and neutral, prude and openly erotic, while effortlessly moving between the serious and the comical. The common thread and the always present element is the body – the artist’s body – that, hairy and pink, is presented and represented as the fulcrum and pivot to his whole painterly practice. A dynamic image, a metaphor in the hands of the artist’s interests, conflicts and fantasies, this body becomes a place for an empowering assertion and definition of its sex(1) and, at the same time, it is a language, used by Basil to reach out to the viewer and communicate his apparently unfiltered psychological self. In this perspective, after fascinating us with their compositions and execution, after making us smile at their often absurd settings, these paintings become all of a sudden even more relevant as they come to define their own reality. A private reality that elevates itself into a universal one, and allows space, time and intelligibility to one of the innumerable forms of the self, enriching us hereof. This painterly space that Basil creates can be seen then as a safe space, a place separated from reality and where nudity and privacy are able to be presented in a more neutral way, where this self-depiction can lose the common carnal perception of the naked body to become a more psychological and interpersonal medium. It is within this space that the artist hopes to open a channel of communication, to establish a contact otherwise hard for him to reach. The multitude of Alexander Basils depicted in The Problem I Did Not Consider hence represent, in this perspective, the problem. They are all the failures and failed attempts to achieve such connection in real life, when stepping outside of the painterly metaphor.

As Ursula K. Le Guin has masterfully written in the introduction to one of her books, in a writing originally referring to science fiction, but also seemingly perfectly fitting the autobiographically fantasised and fictional world depicted by Alexander Basil: “All fiction is metaphor. Science fiction is metaphor […] so is an alternative society, an alternative biology; the future is another. The future, in function, is a metaphor. A metaphor for what? If I could have said it non-metaphorically, I would not have written all these words, this novel […].”(2) So when entering this unique place, that Basil invites us to share with him when looking at his body, at his dreams and fantasies, at the multitude of selves in which he depicts and shatters himself: clumsy, sad, sexy, bored, reaching out by oversharing and being honest, but also by lying, misleading and exaggerating, there we find the metaphor, the richness giving to these works their magnetic force. They attract us in the impossibility of imagining a better way to convey such a complex matter, and there are no words to describe them otherwise, ungraspable and private, as much as public, universal and easy to relate to.

(1) On the subject and especially on how the body becomes crucial in unveiling how the heterosexual hegemony shapes the understanding of sex and gender: J. Butler, ‘Bodies that Matter’; in Feminist Theory and the Body: A Reader, Edinburgh, Edinburgh University Press, 1999, pp. 235-245.
(2) U. K. Le Guin, ‘Introduction’ in The Left Hand of Darkness, London, Gollangz, 1969, p. xi.