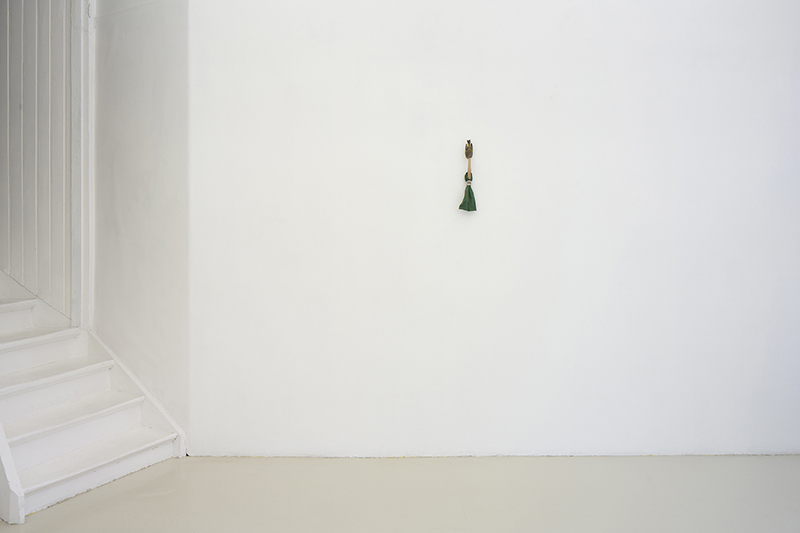 NEVVEN is proud to present Triple 4, a solo show by Gothenburg based Swedish artist Olof Marsja, presenting a full-room installation which transforms the gallery in a temple-like space inhabited by his signature style anthropomorphic sculptures. This new body of work was imagined and assembled by picking in equal measure from Marsja’s Sámi heritage, contemporary 3D software aesthetics, ancient religions and children TV programs, in a freely associative process that questions with both humour and gravity, the concepts of authenticity, historicity and identity.

Four blown glass faces seemingly hover on the gallery wall while three life size figures dressed in capes take the centre of the room, all of them staring at the viewer, their features repeating, three in bronze and four in glass. These figures have a hauntingly sacred aura, they are dressed with dyed furs (an element dear to the artist for its deep connections to the Sámi culture), as much as with Gore-Tex technical clothing. Their build is composed of welded structures as much as by organic components such as alder wood, meanwhile each one of their faces appears in a play between its own features and its materiality bearing an expressive agency of its own. The relation with materials and crafts occupies a central role in Marsja’s practice as he associates their historical and contextual placement, and their aesthetic value in a manner that is ambivalent and permissive at the same time. He is playing with the idea of authenticity when silvering the glass, or attempting to give historicity to these objects by reiterating their features (as alluded by the exhibition’s title, Triple 4). Both of these operations seem to affirm that a tradition can be brought into existence without a past. The fluid meaning that Marsja attributes to objects and his tendency to discreetly add meaningful details to his sculptures, connects both to the animistic beliefs of the Sámi traditional spirituality, in which everything that exists in the natural world has a spirit and a life force in itself, but also to contemporary theories insisting on the intersubjective character of human and non-human relationships. Theories that aim to establish a new ontology that erases the existing barriers between human beings and animals and objects, between culture and nature. In his study intersecting object-oriented ontology and ecological studies, The Ecological Thought, philosopher Timothy Morton talks of the interconnectedness of all life-forms as a “mesh” made of ”infinite connections and infinitesimal differences,” a world not interconnected by a behind-the-scene mechanistic causality, but by a causality in-front-of the objects, as ”an aesthetic dimension of relations between objects, wherein sensory experience does not indicate direct access to reality, but rather an uncanny interruption of the false ontic equilibrium of an interobjective system.” Morton’s vision implies a counterintuitive and non-linear form of causality and interrelation between objects and our perception, and Marsja too, when associating Peppa Pig with animistic beliefs or Thomas the Train to a Mycenaean mask, seems to do the same. He follows a process ruled by an unfamiliar form of causality, by relations closer to naturalistic interpretations of our reality and to the entanglement informing such relations. And by doing so he manages to create objects that transmit an unexpected archeological feeling, a sense of historicity that has its roots in not one but many pasts, and in the present as much as in the future.

Olof Marsja’s Triple 4 faces us with a reflection on the meaning of history itself, on the painful acknowledgement of what denied memory means. And it does so with a strong sense of dignity, of monumentality, a stance coming not only from identity, but from the sense of belonging to a natural world ruled by a completely different set of ontological rules. This is what makes Triple 4 an archeological discovery within the present, where these sculptures, austere and serious, as much as light and silly, find a place that was already theirs from the beginning.

All pictures courtesy of Olof Marsja and NEVVEN.
Photography by David Eng.