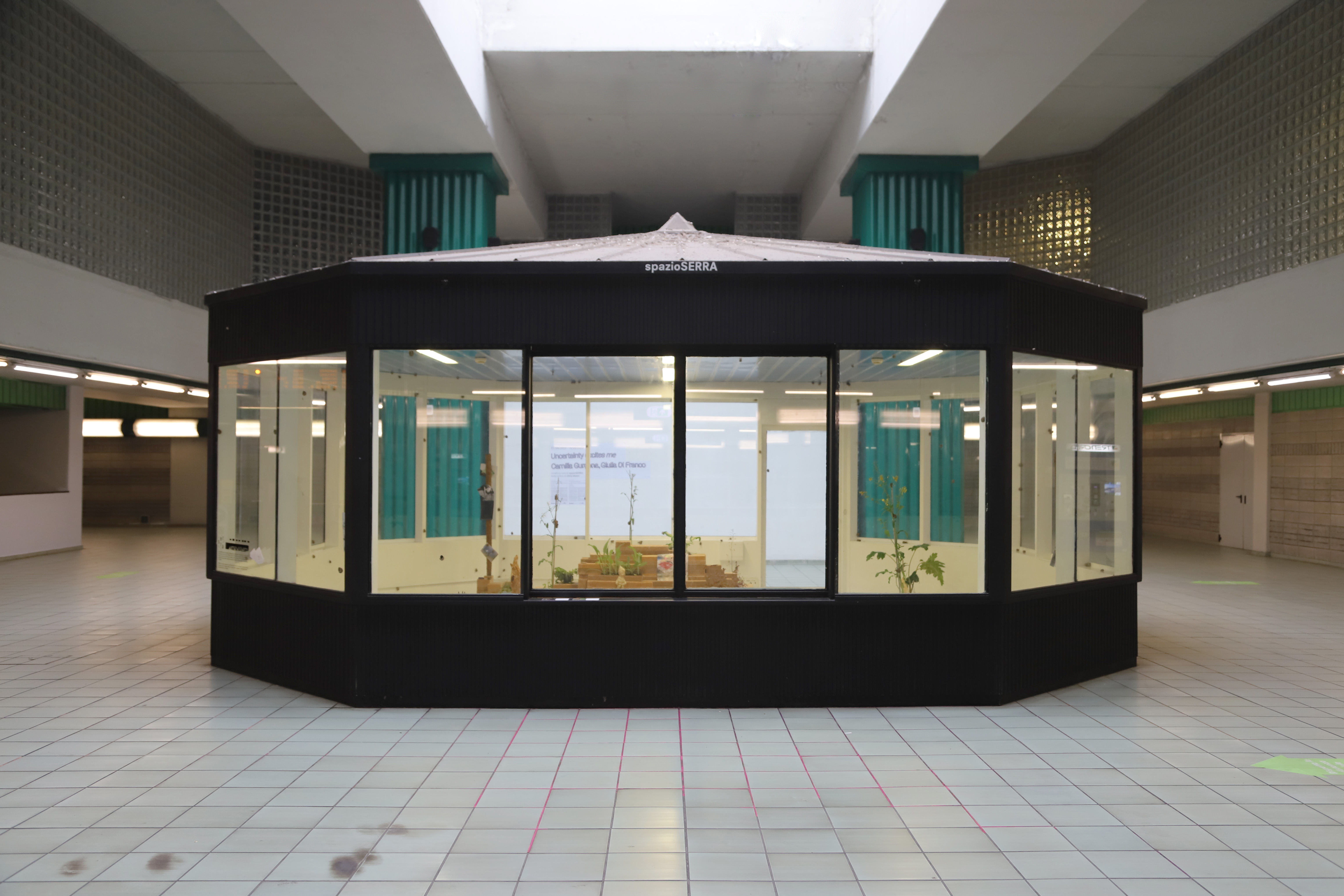 Uncertainty excites me is an invitation to pause, because only by stopping in front of the glass windows of spazioSERRA it will be possible to catch the slow movement of the snails, the only inhabitants of an island reconstructed inside the glass pavilion that contemporary art occupies in the Milan subway. The present installation is the first common work of the artists Camilla Gurgone and Giulia Di Franco who, driven by the fascination of research on these devouring animals, after a long observation and the first domestic experiments on the snails’ behavior, elect them as protagonists of a fantastic island realized ad hoc, recreating the ideal humidity and conceiving for them an adequate sustenance. What would normally happen inside a display case, especially with certain types of reptiles, or in an aquarium, in this case becomes an artistic installation, opening up to the gaze of passers-by. The basis of this operation is a small but decisive fact: snails, placed in favorable conditions, eat and inexorably destroy everything they encounter that is edible. Here their rich meal is made up of all the elements of which the island is disseminated, among which the organic sculptures created by Gurgone and Di Franco are of great impact, with abstract and vaguely monstrous shapes, but also iconic (and ironic): a pinocchio, a kitten, a Mulino Bianco house and a doll. As in a ritual of absurd veneration and cancellation of the present, which immediately becomes the past, the inhabitants of the island engulf what we could interpret as their totems. The present, in fact, has to do with uncertainty, as the title explains, a fascinating uncertainty that excites.

The snail is the universal symbol of slowness and determination, as well as an animal evocative of regeneration through metamorphosis; in fact, it does not undergo cellular aging because, thanks to the secretions it produces, it naturally regenerates, reproducing its own tissue. Its spiral shell then, as happens for many other manifestations in nature, reveals a direct connection with the phases of the moon and therefore with the idea of cyclical time and the succession of events. But if the two artists, in proposing the installation, take into account this characteristic of the animal and its facility to reproduce – the gastropods of the chosen species can lay from forty to eighty eggs each – and therefore work in anticipation of an effective “invasion” of spazioSERRA by the snails, in reality they focus their attention on the destructive aspect of their act of feeding and reproducing themselves, thus leading the thought to something selfishly more human, such as nostalgia. The cancellation of the printed image that the animals devour because they are attracted by cellulose and graphite, as well as the destruction of the sculptural artifacts, are the fulcrum of the operation carried out by Gurgone and Di Franco, who have long documented, during the creation phase, the testimony of the destructive passage, and therefore of the caducity, of the works created. In a certain sense, also, of their uselessness as artistic objects, inessential for the human being and, instead, vital for the animal. The very fact that these works reproduce objects of affection (such as a doll, in fact, or a photograph taken in Istanbul and, anachronistically, printed) confirms this anthropocentric point of view. The documentation will also proceed inside the glass space for the entire period of the exhibition, so that the mutation of the current state of the island can be monitored in real time.

Uncertainty excites me tells all this in the limited space of a glass “greenhouse” in the Milanese underground. An underground that has the same importance as the above in this city that lives and moves quickly, tending to produce and consume objects of worship, fleeting languages, of short duration, effective for the time of use, soon to be replaced by other languages, which respond to new needs. This installation, born from observation, wants to lead back to it, placing itself in a place of passage that can become a privileged point of observation on a microscopic reflection of external life, outside the showcase.