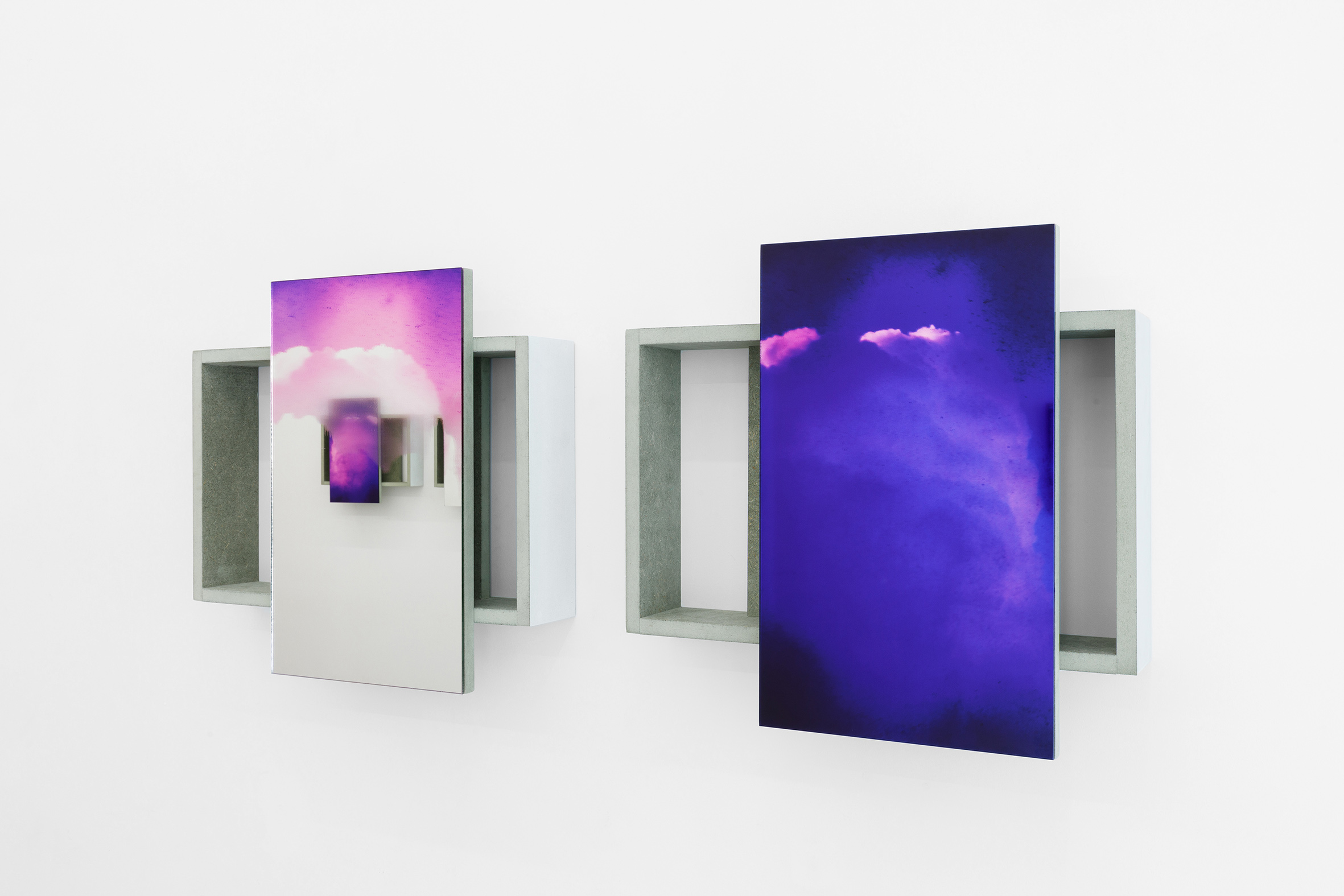 With « Vivid Angst and Colorful Doubts », we enter the fringe of a domestic space, the space of standardised comfort bathrooms and living rooms, with their sliding door shelving units, their indoor plants and their glossy surfaces… A space here become ambiguous, both familiar and strange, populated with effects of déjà-vu and duplications making the experience of the present time falter.

Insidiously, confusion creeps in through the disposition of the artworks and their clustering, the pieces working by pairs or in groups of four, between semblances and dissemblances, hung on the wall or laid on the floor, following a play of symmetry and repetition. These are structures made out of waterproof fibreboard and extruded polystyrene, recalling of pre-built furniture, on the surface of which images have been printed on mirrors or ceramic tiles. The latter notably represents a range of lighting fixtures (Foam), hands making everyday gestures (Stream), but also exotic plants – a real specimen of which can be found in the gallery space. As many images gleaned from a publication on interior design from the 60’s (L’Art ménager), reframed, tinted in blue or in pink, some of them printed in negative, in a way that makes their archetypal contents simultaneously recognisable and undetermined, like uncertain and striking reminiscences. A subtle atmosphere like that of an anxiety-inducing movie arise, as if these images were “printed on another map than the physical world”1, on the brink between two space-times. Coming closer would be like re-enacting the scene of a horrific comedy Ludovic Sauvage found inspiration in (House by Steve Miner – 1985), during which the main character inserts his hand inside the medicine cabinet of his bathroom to find himself thrown into the depths of his memories. What manifests itself here is therefore an “upside- down space”, as suggested by the use of materials usually used to build the invisible layers of our bathrooms (MDF, polystyrene,…) –; a “mental map”2 akin to an “optical unconscious”3 belonging as much to an individual memory as to a collective one.

In line with his earlier works, the artist makes us experience some sort of “flat ontology”4 in which the real and its duplicate exist on the same level, the experience never being “pure” and always mingled with representations. Continuously traversed by remembrances, the present no longer coincides with itself in his works. Consequently, through their doubling and their embedding with real objects, the volume-images in this exhibition fill up with a complex temporality, made of anachronies and survivals, inducing sensations of suspension and flotation. Sensations answered to by the images of purplish fog composing the series Lean, the name of a codeine-based substance known for slowing down perception and for its influence on cloud rap. An impression of slowdown even more amplified by the soundtrack going along with the exhibition, conceived from a composition by Pino Donnagio for Body Double (Brian de Palma, 1984), a B-movie -like film which also alludes to doubles and pretences. Subject to a reverse treatment, which consists in playing music in reverse mode and decelerating its frequencies, this music score and its corny lyricism echoes in a strange way here. Interlaced with suburban and nocturnal sounds, a voice seems to reverberate infinitely, generating effects of suctioning and distancing as if the time was being taken backwards, moving along lines independently of any contemporaneousness. Namely a form of desynchronisation in which a temporality of dread occurs, a spatio-temporal flaw laminated with ghost-images, as derealising as dizzying.

1. Excerpt from an interview with the artist.
2. Ibidem.
3. Expression borrowed from Walter Benjamin, which refers to something that eludes one’s vision despite being at the centre of it.

3. « Flat ontology » refers to a philo- sophical school of thought developed notably by Tristan Garcia and Manuel De Landa, which rejects a hierarchical conception of things and presupposes « an equal ontological dignity to all that is individued » (Tristan Garcia, Formes et objets. Un traité des choses, 2011).