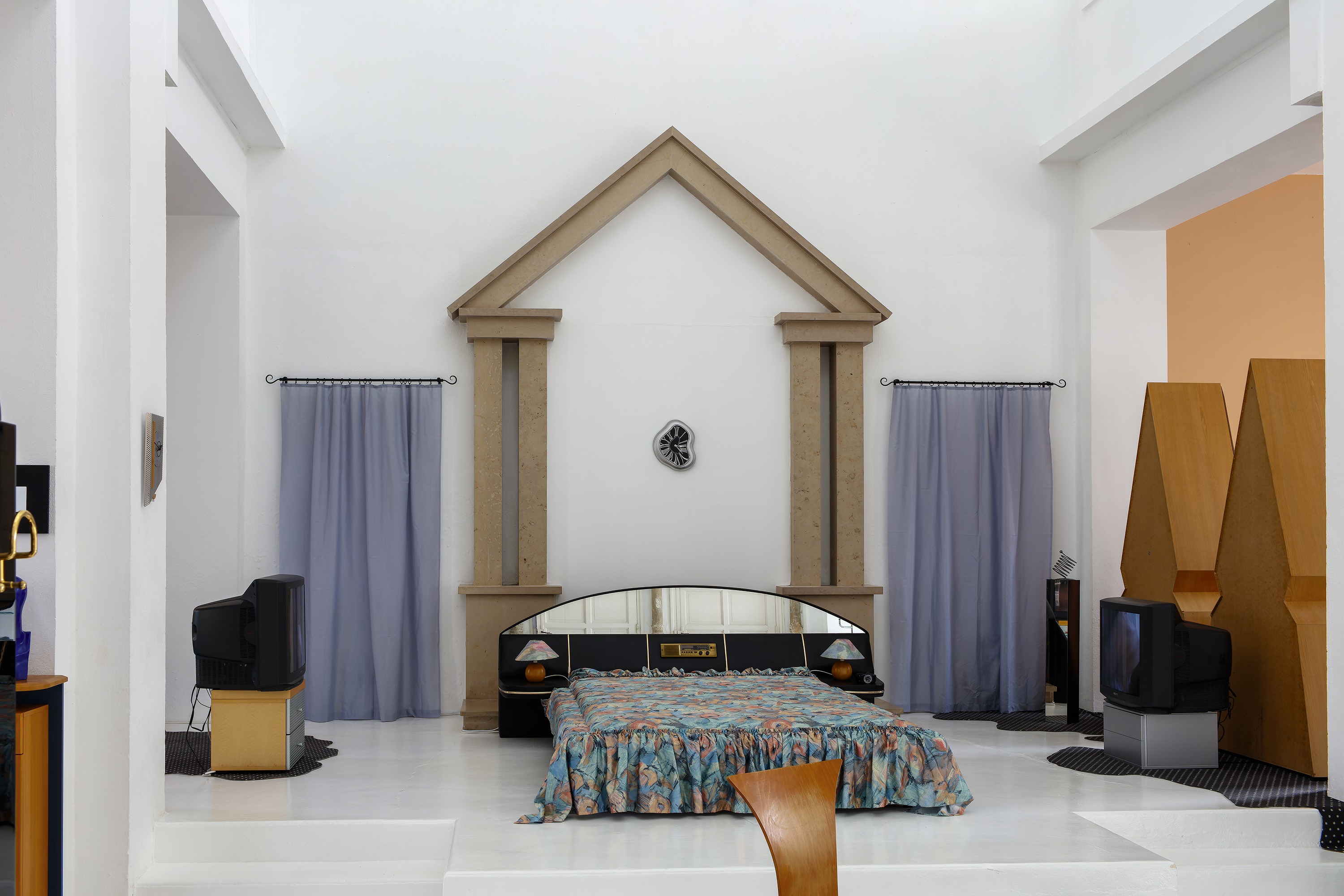 Finding inspiration in many different fields, such as the decorative arts, design, fashion, graphic design, sculpture, and video, Henrike Naumann composes immersive installations, that are at once “period rooms”1 and showrooms, in which visitors are invited to wander, in order to observe and appreciate the elements brought together. These are activated by stories inspired by her own: that of a young woman born in the former GDR, having experienced the transformations of a country marked by the reunification and its unkept promises, the spread of neoliberalism and rampant consumerism in the nineties, within a territory overwhelmed by a radical change of identity, without ever really having been prepared for it or supported through it. The artist is interested in the hidden face of the reunification, that of the abandonment of a young and lost generation, coinciding with the rise of the far right and the creation of small, nationalist, Neo-Nazi groups.

Trained in theatre and film set design, the artist arms herself with this experience to present a period in the history of inexpensive European design, spanning from the fall of the Berlin Wall to the early 2000s. She actively researches design elements and (Ikea-style®) domestic furniture charged with this history, on eBay® and among various second-hand dealers, to subtly compose her installations. Applying this method, the artist presents these undoubtedly kitsch objects, though tinted with a “cool” nineties touch, presenting a postmodern aesthetic – inspired by Memphis or Alessi – bearing an ideology that structured the power then in place: that of the triumphant Western capitalist, the market economy, and “there is no alternative”,2 whose negligence and certainties have coincided with the rise of the far right, now well and truly present in Germany and elsewhere. Because these objects furnishing our interiors could also, according to the artist, spread ideological messages, it is without any kind of animism that Henrike Naumann highlights the propensity of interior design to shape the collective subconscious and orientate individuals’ cultural and political constructs. While questioning the supposed neutrality of these objects, she seeks to understand the roots of the rise of the radical right in East Germany, but also in the rest of Germany and Austria.

The artist observes the political activities and the myth of a certain patriotic “golden age” among those nostalgic for the ex-GDR, to elaborate uchronia3 that stage the way in which these populations could have conducted politics in their territory if they had been the masters of their future and sovereignty. So, each project by the artist gives her the chance to imagine alternative European scenarios, modifying maps and political ideology, with the aim of examining the risks and potential dangers that could result from the evolution of a Europe still consistently prone to political upheavals, from neo-fascism to the anxieties of a culture struggling to recognise its past mistakes.

Mainly attached to the German history of recent decades, the art of Henrike Naumann is not, however, limited to the borders of her home country. It tends to demonstrate the extent to which this historical watershed has affected, on the broader scale, many Western countries marked by the same hegemonic political ideology, often stemming from a system of colonial expansion and exploitation, whose global repercussions are still increasingly charged today. Based on a complex and socially murky history, Henrike Naumann manages to create federating moments that anyone can feel concerned by, through sensual interplays of elements and a pronounced taste for seductive and playful forms of retro design, along with the use of the visual codes of fashion, clubbing, and rave culture – whose style is currently experiencing a comeback. The pleasure felt in contact with her installations operates both in the very surrealistic “uncanny” sense, but also through the dissemination of original vitality, thanks to their old-school beauty and generous forms, favourable to a new generation of progressive and anti-fascist politics and working towards the construction of more fulfilling futures. Associating political urgency and aesthetic pleasure, the work of Henrike Naumann strikes the right balance between an artistic practice aiming to educate and pass on, while providing access to a certain kind of beauty, crucial for our present moment.

On the occasion of her Westalgia exhibition at the centre d’art contemporain – la synagogue de Delme, Henrike Naumann reactivates the installation Anschluss 90’ (2018) and adapts it to the chaotic history of the territory of Delme between 1870 and 1945, when the Moselle belonged periodically to the German Empire as it spread westwards. Anschluss 90’ was initially devised for presentation in Austria, one of the first countries annexed by Nazi Germany. Presenting a showroom from the early nineties, this work is intended as the locus of a story imagining that after the reunification of the FRG and the GDR, Austria would also have wanted to join the great Germany. But instead of military parades as in 1938, it is a proliferation of interior- design department stores and a consumerist frenzy, in both Austria and the GDR, that she sees as characterising this reunification, combining chic hedonism, kitsch consumerism, and radical nationalist politics. For its reiteration in the synagogue, the artist adds the former Gau Westmark4 to this unifying fervour, the territory to which the Moselle belonged during the Nazi occupation from 1940 to 1945, while Delme was traversed by Adolf Hitler Straße. Shown on a carpet representing the maps of these various territories “annexed in the early 1990s”, the showroom reactivates its function of attraction and seduction on the ground floor. This “1990–2000” period room includes two video works: Triangular Stories (Terror + Amnesia) (2012), a two-channel video, presenting on one side a group of young people leaving on holiday to Ibiza to go clubbing in the early nineties and on the other, young Neo-Nazis of the same age, planning a terrorist attack. From the same generation, these characters evoke the outcast youth of the newly reunified GDR, in which the hedonism of raves could easily rub shoulders with Neo-Nazi militancy. Das Reich (2017) is an amateur-style video montage, presenting the political pretentions of the self-proclaimed “Reichsbürger” (citizens of the German Empire) party, a tiny nationalist faction that denies the legitimacy of the FRG, declaring that the German Empire is still active. Upstairs, visitors can observe these various territories from a dominant viewing platform, frozen in their shift from one country to the other, from one ideology to the other.

Whether it be the Saulnois territory witnessing a massive vote for the far right in the recent presidential elections, or German Neo-Nazi groups finding a way to celebrate Adolf Hitler’s birthday in Moselle,5 Westalgia reminds us of the permanency of a deep nostalgia for nationalist myths maintained by a whole segment of the Western population, prone to multiple anxieties. It attests to the urgency and relevancy of artistic commitments to counter the return of fascism and its latest derivatives.

1 The “period room” is a museographic convention that consists of reconstituting a historic space in the room of a museum – a library, eighteenth-century French salon, music salon, etc. – combining paintings, sculptures, furniture, tapestries and other art objects. This mode of presentation stages the supposed coherency of a period, to allow the audience to image it. Very in vogue since the early nineteenth century, these reconstructions were subsequently contested, owing to their fictive and rather unscientific character.

2 A political slogan commonly attributed to Margaret Thatcher, signifying that the market, capitalism, and globalisation are necessary and beneficial phenomena and that any system that takes a different path is doomed to fail.

3 An uchronia is a story of fictive events based on a historical premise.

4 However, the “Western March” was an administrative subdivision of the National Socialist German Workers’ Party (NSDAP) established in 1940 by the Nazi regime and the Third Reich, in force from 1940 to 1945, during the Second World War. Comprising the Sarre, Palatinat, and Moselle, Gau Westmark constituted one of the forty-three Gau of Nazi Germany.

5 Between 2014 and the present day, several events bringing together many Neo-Nazis were reported near the German border at Lengelsheim, Volmunster, Walschbronn, or Sexey-aux-Forges, on the occasion of Nazi rock concerts or the anniversary of Adolf Hitler’s birthday. Risking major sentencing in Germany, these groups prefer to cross the border and hold these celebrations in Alsace-Lorraine, since France is more permissive in their regard: https://www.francebleu.fr/infos/faits-divers-justice/l-alsace-et-la-lorraine-eldorado-des-neo-nazis- allemands-1556891481