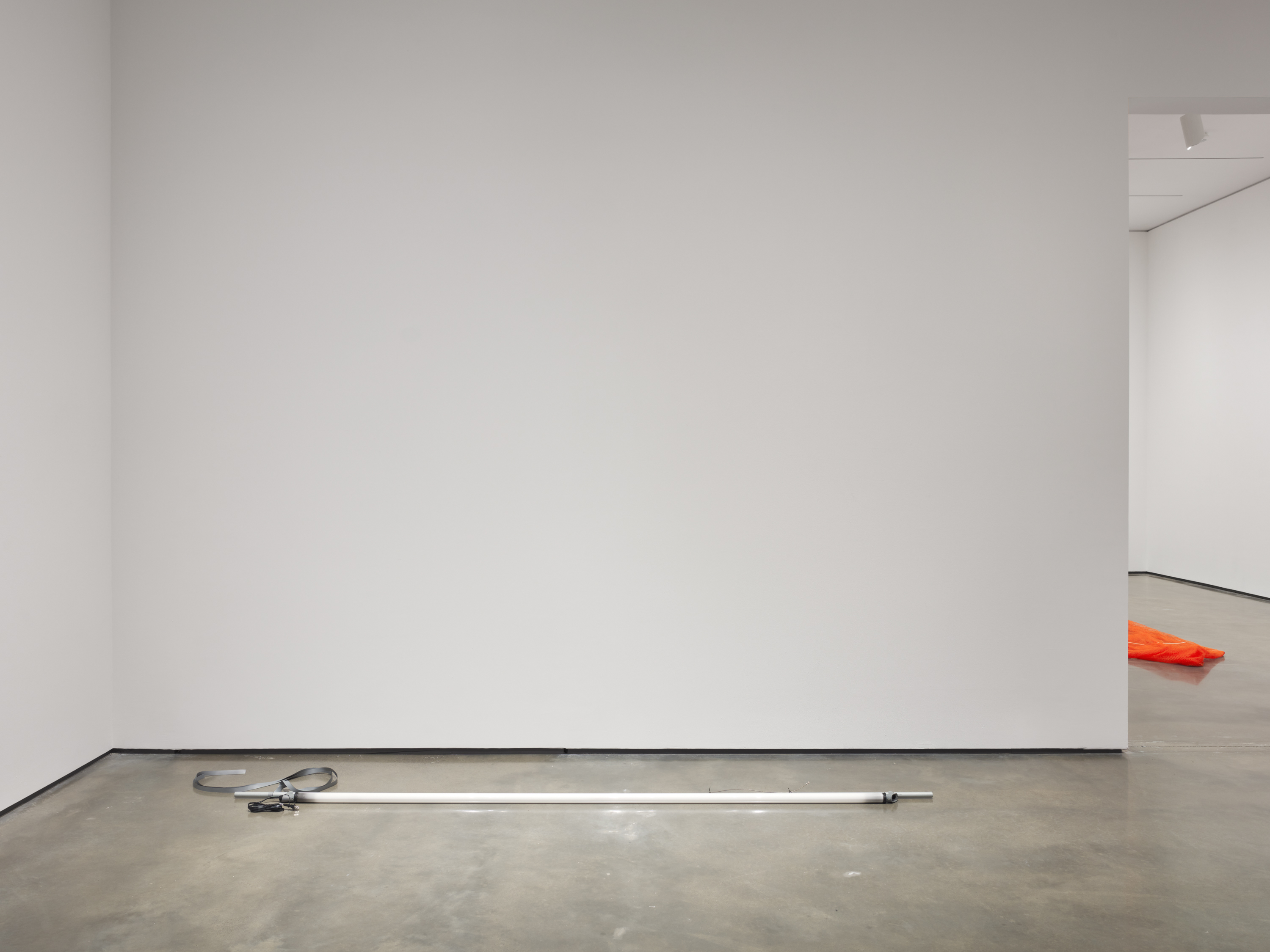 “What is it about?” is a question that too often guides interpre- tation of artworks that don’t offer many interpretive hints. In an attempt to determine the work’s topic – its ‘aboutness’ – this question tends to form links to larger narratives beyond the work itself. whereabouts posit that a work of art can resist such con- nections with theoretical discourses and instead forge ties with its environment.

The exhibition stages a close dialogue between sculptures by Cu- delice Brazelton IV, K.R.M Mooney, and Bat-Ami Rivlin, encourag- ing a more direct and intuitive approach to beholding art. Here, the “aboutness” is replaced by “aroundness”: a mode of mean- ing produced through spatial and material involvement with

the work’s surroundings, including the viewer. Being “around” implies a different relation between meaning and artwork, one of enmeshment, proximity, and encounter. While aboutness fa- vors narrative and theoretical frameworks, aroundness points towards spatial and material connections between the work and its surroundings. The included artworks investigate the evoca- tive potential of the sculptural materials by drawing attention to their infrastructural environment. They do so by foregrounding their relationships with the viewer and the architecture of the ex- hibition space, and in the process revealing their mutability.

Most spatial and motoric information a person collects from their environment is filtered out by the brain and pushed into
a preattentive, nonverbal layer, which one can access as nec- essary. The works presented in whereabouts tap into this un- dercurrent of information processing; they utilize reflexes, con- ditioned behaviors and guided perception to elicit an intuitive response from the viewer. As the sculptures take cues from the environment, they also establish open- to-chance encounters and form transitory networks. As a result the surroundings be- come as much a part of the work as the materials themselves.
In dialogue with the site and its audience, Brazelton IV, Mooney, and Rivlin explore the embedded but inactive utility of objects as a vehicle towards a more automatic, embodied relationship with the audience. whereabouts invites us to look for meaning in these spatio-material moments by de-centering calculated and explanatory approaches.

The prepositions “about” and “around” indicate different rela- tions between nouns and verbs, and by extension, things and ac- tions. The difference between the two also discloses deeper run- ning assumptions about how reality is organized in the mind.

“About” describes a pointed, direct relationship between two distinct concepts or objects, while “around” marks a range of space — literal or figurative — that is encompassed by the ac- tion. To talk about something implies a certain specificity, a link between the spoken matter and the verb. In contrast, to talk around something indicates a more vague area of relevance, with no distinct main theme. In some cases, the two modes coincide, suggesting that “aboutness” can also function in

a spatial sense. In phrases such as to walk about, whereabouts,

and roundabout, this aspect is foregrounded.
When seen as signifying strategies, these two modes have wider ramifications: aroundness favors horizontality and being together, while aboutness links diverse elements in a more vertical or hier- archical manner. Being “around” implies an embracing relation of proximity, a tangential point of encounter, lingering on the bound- ary between two different things — being adjacent to, neighboring with, or engulfing a whole. By contrast, “about” presupposes a dif- ferent kind of relationship between two entities: one of implication and causality, a function of adhering to a narrative or a conceptual framework. It’s a means of connecting the specific with the general, which can sometimes force partial reduction, for it singles out the subject or main theme of the text and downplays inessential threads. Conversely, aroundness weaves things together as a part of the same, diverse cluster, creating an environment for very diverse ele- ments. It is a mode of proximity that avoids reduction and creates open-ended environments.